Fascination with the Unknown 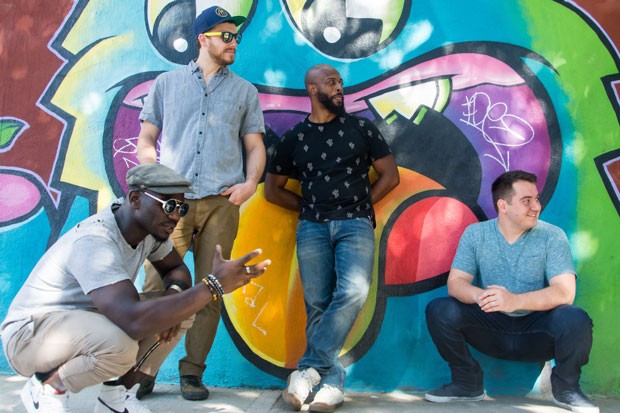 When Halloween falls in the middle of the week, like it does this year, it means Bend goes big—expanding the tricks and musical treats to the weekends both before and after the spookiest day of the year. This year, for those willing to brave the mid-week hangover, TAUK brings a rock-meets-funk fusion to Volcanic Theatre Pub. The group's latest album offers plenty of dance-worthy jams to set the mood for Halloween debauchery. The band has costumes, a light show and Halloween-inspired themes to get the masses on the dancefloor, but drummer Isaac Teel wouldn't reveal details. You'll have to show up to the show to find out more.

The New York-based instrumentalists recorded the latest album, "Shapeshifter II: Outbreak" with a specific theme in mind, which lends itself perfectly to Halloween. The band looks at artificial intelligence and its potential to upend our world. TAUK creates futuristic soundscapes inspired by some favorite films and television series, and pop culture's fascination with the unknown.

"We're always thinking outside the box and coming up with a lot of different ideas, especially when we're in the studio all at the same time and our creative juices get going. The theme of artificial intelligence speaks to our creative hues and is a testament to who we are," Teel says.

Films including "Ex Machina" and "The Matrix" helped the group explore themes of the unknown and the flood of information and speculation presented on screens today. Collectively, the group members have a soft spot for sci-fi, which inspired the instrumental songs on the album.

"You can see where the songs go in terms of the studio vibe and what they will sound like once we're finished with them, but there's also the element of the live show and where the music goes," Teel says. "There are so many places for it to go because we're instrumental. You can just run with the adventures that the music takes you."

For "Shapeshifter II: Outbreak," TAUK skipped the traditional studio route and opted instead to record in a 100-year-old home in Long Island, New York. Teel describes the house as the "Jumanji" house meets the Addams Family house, which adds to the "unknown" theme.

"I think that being able to be in a place that we're comfortable and we don't have to think about time restrictions of sound restrictions—the house was amazing to work in and the imagination runs wild with that," Teel says. "It was great to walk up and down the room and hear what the drums sounded like down the hall. Just by putting a microphone in the room, it was amazing the kind of ambiance you can grab."

TAUK blends rock, jazz, funk and hip-hop; all genres which include plenty of space for improvisation, something the band embraces in its live show. Teel also performs in a hip-hop game show, which employs lots of improvisation. He loves that this element carries over to TAUK.

"We don't know what's going to happen, but we know it's going to be good," Teel says. "Someone stops playing and we know there's going to be space for improv. The part of not knowing is very exciting."

Isaac Teel shares his Halloween favorites and admits that "Blair Witch Project" changed the way he felt about camping.

"I'd have to go with Morpheus from 'The Matrix.' It was really funny and also I was Blade one year," Teel says.