Feeling the Effects of Isolation? You Are Not Alone | Local News | Bend | The Source Weekly - Bend, Oregon

Feeling the Effects of Isolation? You Are Not Alone

January 06, 2021
comment
If you’re struggling with isolation or experiencing other challenges related to social distancing and closures during the pandemic, you’re not alone. That’s the message from the Oregon Department of Human Services, which launched the “You Are Not Alone” campaign last month, hoping to address mental health issues facing Oregonians during the COVID-19 pandemic. It’s a comprehensive list of resources that address a wide range of health issues, including domestic and sexual violence, suicide, alcohol and drug abuse, challenges facing kids and seniors and financial exploitation.

Shannon Biteng is the trauma informed organization manager for the ODHS. She says the campaign is a proactive effort to address how the pandemic has affected some of the state’s most vulnerable, like children and seniors. 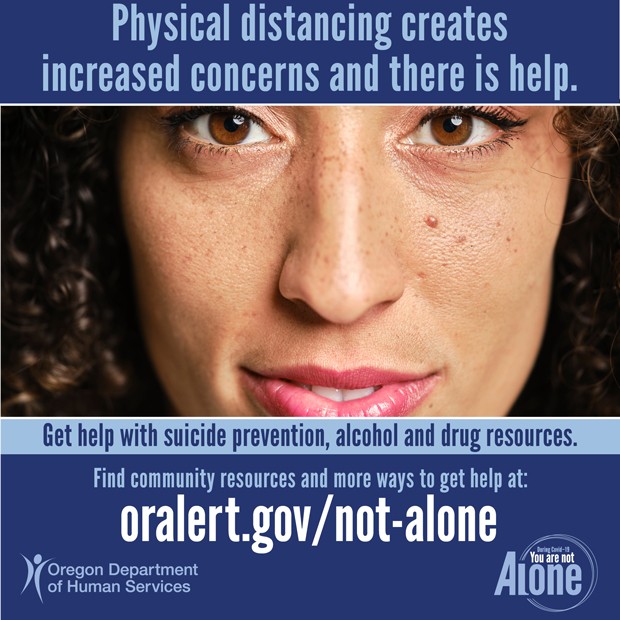 “We have a community safety net—teachers, doctors, counselors—all of those different types of people in the community that have eyes on not just children, but on our aging population as well,” Biteng told the Source. But with schools largely closed to in-person instruction and senior centers and visiting hours limited or unavailable, it’s easier for issues to go unreported. For example, she said the ODHS saw a drop in calls to the child abuse hotline, but they do not suspect it’s due to decreased instances of child abuse. Rather, children just aren’t around members of the community who might have called in the past. Not only can this leave people vulnerable to abuse, but isolation can exacerbate such issues.

“Let’s take domestic violence for an example,” she said. “We knew that it would be difficult for [victims] to have an outside opportunity—a connection potentially—to ask for help or to express a need for some kind of assistance, especially if they weren’t able to come into the office,” she said.

Changes in their home lives can put them in increased danger, too.

“People aren’t working, lost their jobs or are working from home,” Biteng said. “That adds another difficult layer for people experiencing domestic violence.”

People who are not experiencing abuse are at risk, too, she says, because across the board groups are losing access to important emotional support structures.

“With our aging population, we are very, very, very concerned about isolation and perhaps them not getting out to their communities, like for example to senior centers, or having interaction with their families,” she said. “And we always have a concern about our LGBTQ youth.” She says like all kids, “they may have had the support of somebody at school, a counselor, teacher, whoever, and now they’ve lost that direct human connection.”

With the campaign launched, OHA, ODHS and community partners are working to get the word out. They’ve aggregated the information on the web and via social channels and are working with partner agencies.

“But we know that the aging population doesn’t always utilize social media,” Biteng said, “So, we know it might be more helpful if they had a flyer.”

The website has printable materials that she’d like to see “in places like grocery stores and pharmacies and retail stores,” but a lot rides on community involvement.

“We know that a lot of this information isn’t going to make its way directly to the individual,” she said. “If you have a neighbor or if you have a friend or relative or there’s somebody you know that some of these resources might help, we try to encourage you to share the resource.”

UPDATE 01/07/2021: The primary agency working on the campaign is the Oregon Department of Human Services (a previous version erroneously called it the Oregon Department of Health and Human Services), through grant money received from the Oregon Health Authority. While she works in other capacities for the OHA, Shannon Biteng is the Trauma Informed Organization Manager for the ODHS only. And the child abuse hotline is only through the ODHS, while the article previously said the hotline was through the OHA and ODHS.