Bend City Council members early this month shied away from limiting downtown events, a move that downtown business owners have sought in order to lessen impacts they say result from festivals and parades—including trash, noise and decreased sales. But at a Sept. 4 City Council meeting, councilors agreed to form a subcommittee to review the issue. 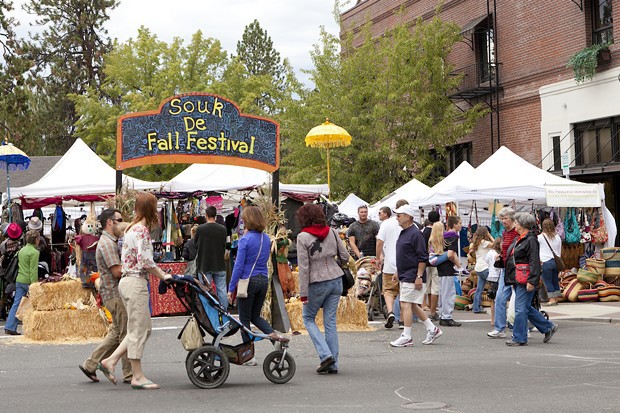 The Downtown Bend Business Association started looking into concerns raised by downtown business and building owners in summer 2018. Since then, the association has surveyed business owners, proposed using nearby Troy Field for events, met with event organizers and city staff and gathered more data. Complaints from business owners include losses in sales; customers unable to pick up items such as art and furniture; the need to clean-up vomit and urine on streets and sidewalks; problems getting deliveries; and less customer parking. Events exasperate challenges that downtown business owners already face, such as rising rents and limited parking, according to Mindy Aisling, the association's executive director.

"I don't think there's any bad guys here," Aisling said at the meeting, noting Bend's growth and calling for a discussion about the city's downtown.

The association seeks changes to city rules on events. Proposals include charging an impact fee that event applicants would pay the association; setting stricter limits on road closures; holding pre- and post-event conferences; blocking event food and product vendors from selling within a block of a downtown business that sells the same item; and requiring event organizers to notify the association 60 days ahead of an event, with the city collecting any comments on it for discussion at the pre-event meeting.

"The impact on the businesses hasn't changed." Mayor Sally Russell tweet this

"It looks like they're trying to eliminate events," Councilor Barb Campbell said.

Mayor Sally Russell questioned the problem itself. Most of the events have gone on for many years, she noted, some for decades—such as the July 4th pet parade.

"The impact on the businesses hasn't changed," Russell said.

Aisling noted that some of the long-time downtown business owners helped start some of those events as a way to help bring people downtown in the first place.

"We no longer need these big events to bring traffic downtown," Aisling said.

"I'm just trying to quantify and figure out what we're trying to solve here," Russell responded, questioning why the issue has come up now when the events' dates and impacts have been the same for years.

’Hopefully they have a good, robust dialogue and get a lot of voices…You definitely have to make sure there’s a balanced dialogue.’—Chuck Arnold, now with the City of Redmond tweet this

Downtown business owners told the Council that events take up prime time and space during summer days just for set-up work, with noise and closed streets that make the district uninviting for visitors.

Dee Dee Cochran of downtown's Northwest Home Interiors said she has worked downtown for 20 years and grown more frustrated with the number of events and the length of time they go on. Julia Kennedy of Red Chair Gallery said sales drop 30% on event weekends and complained that music stages set up in front of the gallery's door. Kennedy wondered why the music stages couldn't rotate among different spots or station in front of a business that closes earlier, such as a bank. Barrio owner Steven Draheim called for limiting the scope and duration of events.

"I would argue that downtown is the event," Draheim said.

The city plans to review at least part of the issue again in November.

The association did not return requests for comment by press time. But an automated reply to an email last week said the organization would be slow to respond due to its work organizing its largest fundraising event of the year, the annual Bend Oktoberfest, that it describes as a party for 15,000 people held in downtown Bend.

Organizers of some of the several big annual events that take place downtown could not be reached. But Ernie Gilpin, who has served as chairman of the annual Bend Christmas Parade for 28 years, said he understands the association's concerns if too many events too often cause downtown businesses to close or to lose sales. The volunteer-run parade is a little different than some of the larger, longer events because it only closes streets for a few hours of one day, said Gilpin. He noted how he plots the route—using downtown partly because of its square shape and its mileage—and factors in the number of entries, the weather and other considerations.

"In our case, I almost think we probably bring business down there," Gilpin said, noting that the short event probably draws about 5,000 people and many of them may stay downtown afterward. He has never gotten feedback that the event shoudn't take place downtown, he said.

"We pride ourselves on the biggest Christmas parade in Oregon and no one's been able to dispute it," Gilpin said.

Source Weekly is the sister company of Lay It Out Events that puts on several downtown events each year.

"These events are the largest community gatherings in the city," Luke Larsen, event director for Lay It Out Events, said in a statement, referring to downtown events in Bend. "They are a vital part of a culturally vibrant society. We are looking forward to discussing how to make these events better for all stakeholders and the greater community."

Chuck Arnold, now the economic development/urban renewal program manager for the City of Redmond, led the association starting around 2005 and recalls how some of the events came to be—as a way to help establish habits for customers to visit downtown and see what's new, so that they might return to shops and restaurants they spot. That was part of the intent at a time when the recession had hit and the Old Mill was establishing its presence, Arnold said this week.

"Has that been over-played? Maybe it's run its course," Arnold said.

Or maybe there are already enough restrictions on events, he noted. All of that is a discussion for the city to have, he said.

"Hopefully they have a good, robust dialogue and get a lot of voices," Arnold said, warning that the loudest voices shouldn't tilt the scales. "You definitely have to make sure there's a balanced dialogue."