Outdoor lights obscure dark skies, waste energy and throw off the rhythms of all types of life. Here's what advocates are doing to protect Central Oregon's vast dark skies.

Amid a shield of darkness, under a sea of glittering stars at Sunriver's observatory, children gaze at Saturn for the first time. Visitors peer through telescopes at the moon's miles-long craters and marvel at the wonders of the Milky Way.

But, as visitors look to the north, a cloud of orange sky glows over Bend, as light escapes into the atmosphere overhead. This is one visible sign of the city's growing light pollution problem. 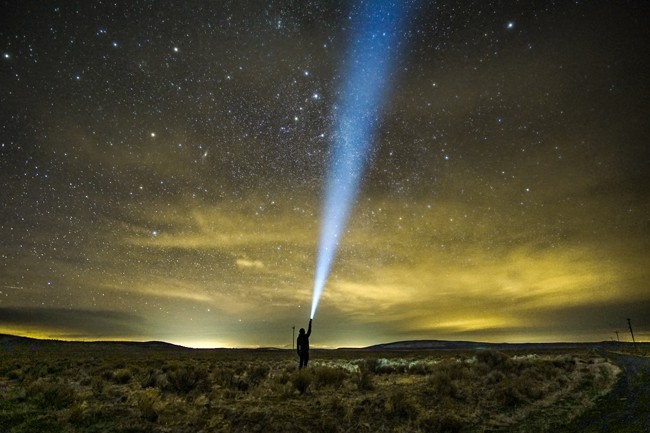 "We call it the 'arouri Bend-ialis,'" joked Bob Grossfeld, who's managed the observatory for over 20 years.

As the sky grows brighter in Bend and throughout Deschutes County with the booming population, advocates are pushing residents and local officials to protect the dark skies through special designations, stricter lighting policies and educational campaigns.

Outdoor lights — that emit too much light, use blue wavelengths or shine up and out — not only obscure the stars, but they also disrupt the cycles of all kinds of life. Lights glowing into the night throw off humans' circadian rhythm and suppress the production of melatonin. They can also make trees grow unevenly and disorient birds migrating at night.

That's all in addition to the enormous energy cost: the Tucson-based International Dark Sky Association (a previous version stated the org was based in Phoenix; we regret the error) estimates that at least 30% of all outdoor lighting in the U.S. is wasted, largely with unshielded lights. That adds up to $3.3 billion a year and the release of 21 million tons of carbon dioxide. 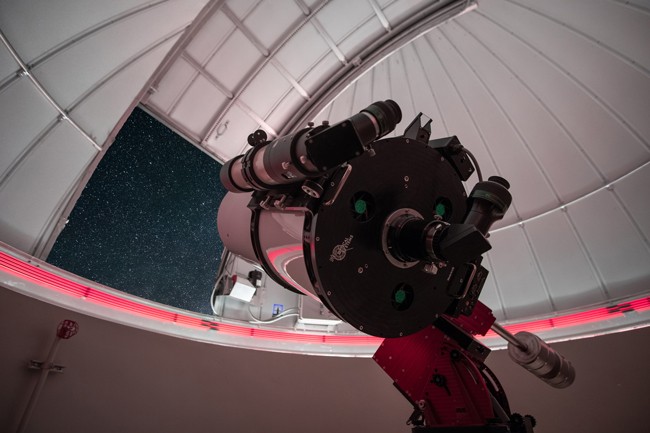 Bend accounts for nearly half of the light pollution in Deschutes County, according to analyses from the IDA's Oregon chapter. In just 10 years, between 2010 and 2020, the number of upward lights grew by almost 12% in Bend, and 20% in Redmond.

But the increase was most stark outside city limits in Deschutes County's unincorporated areas, where the number of upward lights doubled, now making up almost one-third of all light escaping into space in the county.

The community of Sunriver, on the other hand, saw its light pollution levels get even lower, as the IDA designated it Oregon's first official Dark Sky Place in 2020. Sunriver — home to the largest publicly accessible observatory in the country — is one of 195 Dark Sky Places around the world, as of January 2022. It's also now even more of a destination for the growing population of "astrotourists," or visitors who travel in search of dark skies.

While giving a tour of the observatory's ever-expanding facility, Grossfeld said, "Sunriver cheated," explaining that the resort town had been enforcing strict lighting policies since the 1960s, thanks to an active homeowners' association. While many communities must overhaul their entire lighting system and go through a rigorous application process to get a dark sky designation, Sunriver just had to check a few boxes.

"Part of (Sunriver's) development was all about keeping lights pointing down and covered and the natural beauty of the world," Grossfeld added.

Oregon's other newly minted dark sky place, Prineville Reservoir State Park, benefits from being 16 miles up a dead-end road, according to Chris Gerdes, the park's manager.

Light pollution is minimal because "we're really at the end of the line," Gerdes said of the park, which offers special stargazing permits and seasonal telescopes to nighttime viewers.

Prineville acts as a gateway to the Oregon Outback, which—nestled between Bend, Burns and Boise—is part of the largest swath of dark sky in the lower 48. As light pollution from growing populations encroaches into the pristine sky area, advocates are seeking to gain community support for making the area a Dark Sky Sanctuary, the IDA's highest accolade.

Other communities in Oregon have a long way to go to bring their skies up to par: Keeping light pollution to a minimum is simple when a place is completely isolated like Prineville Reservoir or has a homeowners' association like Sunriver's enforcing strict lighting policies, but it's a bit more complicated for the rest of Deschutes County, where enforcement is largely complaint-driven.

"Sunriver enforces it (without just complaints)—that's key," said Cathie Flanigan, who helped found Oregon's chapter of the IDA with her husband, Bill Kowalik. 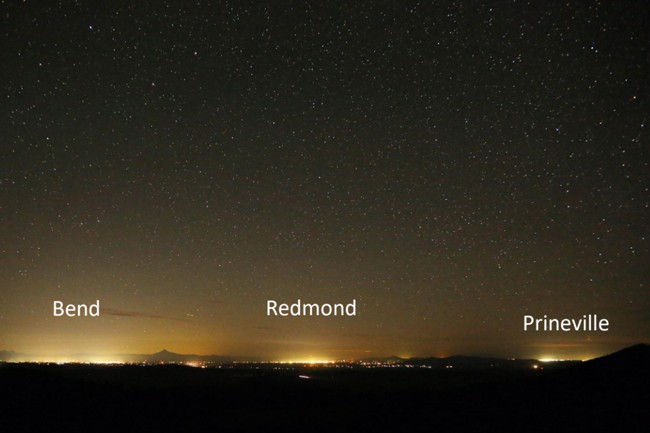 Perched on the top of Awbrey Butte, Flanigan and Kowalik's house looks out at the Cascades. On clear days, they can even see Mount Adams, in Washington state. And on clear nights, endless stars await — that is, when they can see them.

According to the couple, they could see many more stars when they moved to the house five years ago, and their neighbors say they used to be able to see even more—a prime motivation for the couple to dedicate themselves to reducing light pollution and form the Oregon IDA chapter.

"Neither of us are astronomers, but we appreciate the majesty of the Milky Way," said Kowalik, who worked as an earth scientist for 35 years and analyzes light pollution data in his free time. He, and other chapter members, have placed 35 sky quality meters around the state, which take measurements every five minutes.

Kowalik presented this data as part of a panel at a Feb. 10 Deschutes County Planning Commission meeting, where dark sky advocates urged the county to update its 1994 lighting ordinance applying to all unincorporated areas. They recommended the county follow the IDA's five lighting principles for responsible outdoor lighting: make it useful, targeted, low-level, controlled and use warmer colors.

"Good lighting you don't notice," said Flanigan, adding that more lighting is not always safer. Shielding and lowering lights can prevent glare, and warm-colored lights have less of an impact on night vision than blue lights.

In addition to proposing the county change the color of its lights, the panelists proposed limiting when businesses can have lights on at night and restricting the use of string lights, since they are rarely covered and emit a lot of light. They also suggested making sure all outdoor lighting at construction projects is dark-sky approved and simplifying the process for making lighting-related complaints. All of this would ideally be accompanied by educational campaigns.

The Planning Commission ultimately voted unanimously to recommend the Deschutes County Board of County Commissioners update the existing outdoor lighting ordinance and explore the possibility of a dark skies educational campaign. This spring, the Board of Commissioners will start considering this update, though it's unclear what form it will take.

According to Flanigan, "Deschutes County is really ahead of the pack here."

"They can be the example for the state," she said, adding it's "in the cosmos" for the commissioners to update the policy, with a groundswell of support. Even the High Desert Museum is running an exhibit focused on conserving dark skies starting April 16.

The town of Sisters is also making moves toward updating its outdoor lighting policies. Students from the Sisters High School astronomy club presented to the City Council on Feb. 23, urging it to implement the city's lighting ordinance and raise awareness about light pollution.

"It's something that I think the kids really care a lot about, and they're excited to use their voice," said Rima Givot, the high school science teacher who leads the club. "Little actions do matter, and it's totally within everybody's power to play a part."

“It’s the easiest form of pollution to solve because you can literally just turn off a light.”—Grant Tandy, Hopservatory manager tweet this

One of Givot's former students, Grant Tandy, went on to a career in astronomy, running the "Hopservatory" at Worthy Brewing. He advocates for dark skies by trying to get visitors as enthralled by the universe as he is.

On the eastern edge of Bend's city limits, Worthy Brewing is a hub for astrotourism where visitors can pair their dinner with a look at the stars. Viewers start their journey in a small, circular room known as the "transporter room," which sits at the base of the observatory dome towering two stories above. The room is decorated with mosaic tiles depicting speeding comets, spaceships and planets, and a marbleized Venetian plaster mural that shows the transition from Earth's core toward the stars and beyond.

"The main goal is stimulating curiosity and trying to get people to think outside the box," Tandy said, adding the brewery-meets-observatory offers yet another opportunity to get people invested in the night skies and help them understand how they can reduce their own light pollution.

"It's the easiest form of pollution to solve because you can literally just turn off a light," Tandy pointed out while climbing the ladder to the large telescope in the small viewing dome.

Tandy can tell when light pollution is making his views blur together at the Hopservatory, which—unlike Central Oregon's other observatories—is located within an urban area. On the flip side, the Hopservatory does reach a unique demographic of people, who may not be willing to drive an hour out of their way to an observatory like Pine Mountain or Sunriver.

It's also the only observatory connected to a brewery that's in the "known universe," Tandy joked. "We're looking for others," he added, peering through his telescope at the sky above.

A Sky Full of Stars, Local observatories and when to visit