Filmmaking with Your Quaranteam

Taylor Morden never slows down. He's a multi-instrumentalist musician with a band focused on Weezer covers, a seemingly tireless filmmaker hoping to premiere his latest documentary, "The Last Blockbuster," at the Tower Theater in July, and a devoted cinephile who consumes movies like water.

Even during quarantine Morden has managed to keep multiple projects juggling, including producing, editing and directing "Project 88," a remake of "Back to the Future II" featuring 300 fans across nine countries broken down into 88 separate scenes. Released on YouTube last month and boasting over 100K views, the film is a bonkers zero-budget ride that manages to capture quite a bit of the magic of the original film.

Morden has also been directing remotely through Zoom.

"I was working on a project with my buddy Falk," Morden explains, "who had someone quarantined with him. I packed up my camera gear, set it out for them to pick up, along with some storyboards I drew up. Then we were able to do a full shoot via video chat and I could see the back of the camera and direct the performance remotely—something we never would have done without the distancing guidelines in place, but I think it actually worked pretty well. I'm editing the short now."

Remote directing probably won't become commonplace after the guidelines are lifted, however. "I've done a lot of remote shoots for documentaries before COVID, where it was cheaper to hire a local crew and direct via Skype than to fly out there with equipment," says Morden. "But that's a pretty unique thing and only really happens in the low-budget indie world. I doubt we'll see someone directing a superhero movie via FaceTime any time soon." 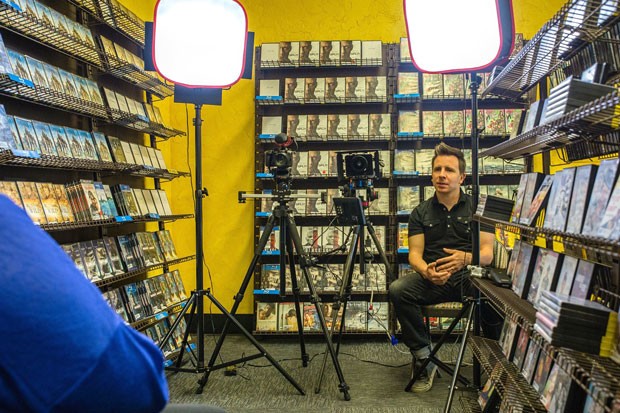 With so much speculation about how COVID-19 is going to affect the film industry and movie theaters, it's important to try and imagine how it will change the state of indie filmmaking for the foreseeable future. "We are probably in for a long road back to 'business as usual,'" says Morden, "and I'm hopeful that means that people like me who are used to operating with very small crews and can adapt quickly will have a slight leg up on the studios that can't figure out how to make a movie without 50 people on set. It's hard to say what the regulations will be, but I do think that we are potentially looking at much smaller crews, maybe using green screen simply to put two actors close to each other in a scene? It could be anything."

As devotees of the theatrical experience, it's hard for Morden and myself not to fret about a future which eliminates the choice of moviegoing altogether, trading in shared spaces with living rooms.

"I think we may see the end of first run movies, unless they're giant Marvel movies or "Star Wars" or something. But we will always have that need for a communal experience, and maybe we will lean more towards the novelty theaters that show '80s movies, drive-in theaters, or movies being shown as a special event at a regular theater like the Tower. But it definitely sucks to think about movie theaters going away. Going to the movies is the thing I miss most about pre-quarantine times."

You and me both, Taylor.