As the federal government waffles over extending the $600 a week unemployment benefit, Oregon's employment system has finally caught up

On Friday, more than 11,000 unemployed people in Deschutes County lost the additional $600 a week they had been receiving from the federal government since the pandemic began. Meanwhile, some gig workers in Bend still haven't heard back from the Oregon Employment Department since they filed four months ago.

And then there's the group that received all their benefits at once: Over the last few weeks, some formerly self-employed workers started receiving stacks of checks from the OED—some worth more than $10,000. Their Pandemic Unemployment Assistance finally came through.

As the federal government debates the pros and cons of extending the extra $600 benefit, the Source talked with people affected by the system. For some families, the extra money pays the rent and puts food on the table. For others, it offers a little respite to enjoy the Bend lifestyle for a few months. Meanwhile, some small businesses reported struggling to fill positions they've had open for months.

In Oregon, the unemployment benefits system runs on Reagan-era computers, and uses software coded in the 1970s, according to The Oregonian. Still, there are not too many people left who work on the computers, never mind fix the software. With only 100 employees pre-pandemic, the department simply didn't have the bandwidth for the recent tsunami of panicked filers. To add insult to injury, people with their very livelihood on the line can be a demanding and persistent bunch. Phone lines jammed. Emails bounced. The OED's website crashed over and over mid application. For a string of days, the website wasn't even live, The Oregonian's account described.

Four months later, with $3.4 billion in benefits paid out, by a total of 1,050 employees and counting, the OED has finally come up for air.

One of the major snafus was the complicated nature of processing claims for gig workers: people who were self-employed or drove for Uber, for example. All of these claims, called Pandemic Unemployment Assistance, had to be adjudicated (judged to be legitimate) by staff trained in self-employment. An internal memo uncovered by Oregon Public Broadcasting revealed this process could delay claims by almost four months.

Before the pandemic, Oregon didn't have unemployment for the self-employed. It's one of the dangers of running your own business; when the work dries up, there's nowhere to turn. But the gig economy exploded after the Great Recession: 36% of U.S. workers had a gig work arrangement, according to a 2018 Gallup report. So the federal government passed a provision to provide the self-employed with coverage during the pandemic, and states had to figure out how to administer it.

During a press briefing July 29, David Gerstenfeld, the OED's acting director, said the agency only has 19,000 PUA claims to go and will meet its goal of getting through all of them by Aug. 8. For those still waiting for adjudication, the OED set up a "Benefits While You Wait" program. The department contacts people who qualify directly.

"We're going to reach out to people that may be eligible," Gerstenfeld told the press last Wednesday. "Because what we don't want to do is have lots of people filling out applications for something that won't help them and that just create more work in the pipeline that slows down our ability to get benefits out."

Jackpot: Dozens of checks at once

For Jason Brummond, 27 checks arrived at once last week.

"I debated even doing it [applying for benefits], jumping through those hoops, with all the stories of the unemployment in Oregon," he said.

Brummond has been self-employed for two decades, running a photography business where he travels to motocross races, rodeos and waterskiing events around Oregon, taking photos of athletes. After the events, he invites the competitors to come by his photography trailer, where he sells photos. 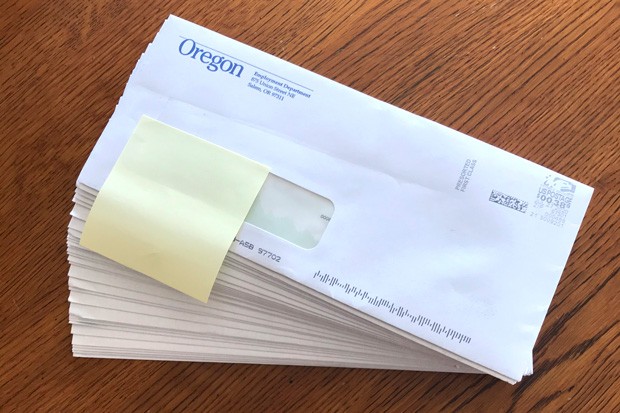 "It's like when you get off a roller coaster at Disney and can buy your photograph, except I'm a real person taking the picture," he explained.

Brummond's last day on the job was March 5. He didn't work again until July 4th weekend, at a rodeo barrel race in Scappoose.

He doesn't sell anything online due to screenshot pirating, so he couldn't suddenly pivot to a new business model when these events got canceled, he said. In the interim, he filed for unemployment half-heartedly. He lives a low-cost lifestyle out of his trailer that doubles as his storefront when he goes to events. Between gigs, he calls Bend home, or stays in towns along the way with mountain bike trails to explore.

"This is the first time I heard back from them, well, besides an email that said they got my stuff and 'please don't call,'" he said.

Brummond has other self-employed friends who have had a very similar experience over the last few weeks: One day the mailbox was full of checks. Suddenly people who had been scraping by on savings, credit cards or help from friends and family had thousands of dollars all at once.

“This is the first time we’ve ever had the challenge of hiring, and we’re certainly not by ourselves in that, it’s everywhere you go. People are saying ‘there’s no jobs out there’; they are just not looking.”—Lauren Johnson tweet this

Julie O'Neal is still waiting for her first check. She first applied for unemployment insurance as a contract worker the last week of March, and then applied again under the PUA program. Four months later, besides a few generic emails confirming the OED received her claim, nothing, she said.

Before the pandemic, O'Neal made a decent wage as a professional assistant, but her employer cut her hours completely for a few months, and then slowly began trickling in—five hours one week; 10 the next and for the last month or so.

O'Neal got a four-month deferment on her mortgage, which is now coming to an end.

"I'm a senior, so my additional job prospects are not good," she said. It's a sentiment I heard from at least two other people in their late 50s and early 60s during interviews.

"I don't agree with taking advantage of the unemployment system," she said when asked about filing for the wages she was missing out on now due to her reduced hours. "I could lose my job. I'd be really bored."

As of press time, the federal government had reached an impasse on renewing the $600 a week unemployment bonus. Since the beginning of the pandemic, people on unemployment received an extra $600 a week automatically tacked on to their regular benefit. In Oregon, this brought weekly pay for the unemployed to around $800 to $1,200 a week. According to a study by the University of Chicago, 68% of unemployed workers in the U.S. were getting more pay than their old jobs with the bonus.

In Deschutes County, with more than 11,000 people currently receiving an extra $2,400 a month, there's at least some preliminary evidence that it prevented a more devastating economic fallout. So far, 15% of small businesses in the county have closed, but consumer spending has only dropped by 3.7%, according to Opportunity Insights, an economic tracking system studying the impacts of the pandemic.

On a national level, Josh Bivens, the director of research at the Economic Policy Institute, wrote in a blog post on June 26 that without the extra benefit, millions more jobs will be lost in the coming months. The money is going to people who need it most, and who will spend it the fastest, thereby providing one of the most efficient ways of stimulating the economy, he wrote. This keeps stores and restaurants open and saves jobs. In Oregon, cutting the bonus could cost the economy 115,599 jobs and $7 billion in personal income over the next year, according to Bivens' study.

Over the next few days, Congress may pass an emergency extension of the benefit, or it may be held in limbo as Republicans and Democrats argue the pros and cons of each of their stimulus plans for the next week, before the Senate is scheduled to adjourn.

Meanwhile, some business owners complain that hardly anyone is applying for their job openings. They blamed the extra $600 benefit.

Lauren Johnson is the CEO and President of Rudy's Markets, which runs Newport Avenue Market in Bend and Oliver Lemon's in Sisters and Terrebonne. In 2015, it became an employee-owned company, which means that employees—after working a number of years—own a stake in the company, which they can use as a nest egg for their retirement, Johnson said. The company also pays great benefits, she added.

But in the past few months, she's barely had any applicants for job openings. Usually people come by fairly regularly to fill out applications and wait for an opening, she said.

"I believe it's that additional unemployment [$600 extra a week]," Johnson said. "This is the first time we've ever had the challenge of hiring, and we're certainly not by ourselves in that, it's everywhere you go. People are saying 'there's no jobs out there'; they are just not looking."

Johnson doesn't think it's fear of the pandemic that's holding people back. Of the 170 employees who work for the company, only one chose not to work out of fear of getting sick, she said. She said the employees feel safer because the store's customers are thoughtful, wearing masks and distancing. Employees are reminded to wash their hands every 30 minutes.

Angelina Swanson, CEO of aos Skincare & Wellness Spa in downtown Bend, had similar issues. She said she pays above industry standards but has been looking for retail associates, estheticians and massage therapists for months.

"We've never had trouble hiring before," Swanson said. "The resumes that we have received are subpar from the ones in the past."

Swanson said she had two people call in inquiring about the jobs who asked if they could be paid under the table.

"Another person came in for an interview, sounded really excited about the job, and then upon reflection, said they'd rather keep their unemployment," she said. "People are enjoying not working."