David Rosell is a writer, traveler, financial planner and retirement "architect" who runs a boutique wealth management firm in downtown Bend, serving 100 clients from all over the U.S. He started his first business at 15, began saving for retirement (in lieu of buying a new car) at the age of 19 and has lived and traveled in almost 80 countries.

For this Money Issue, Rosell sat down with the Source to talk about how he's gained an international reputation as a financial guru, while remaining committed to connecting with nature and staying focused on spiritual wealth above material gain. 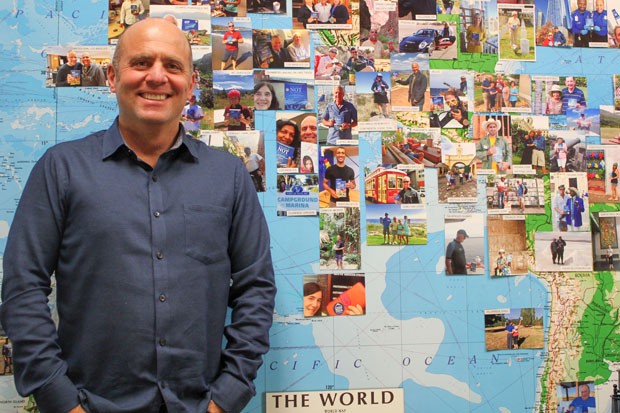 Rosell has two personas. The first is the affable guy you might meet at a bar after a long day on the slopes, full of colorful tales of serendipity and misadventure. The second personality is serious and deliberate, with a knack for explaining complex financial scenarios in down-to-earth language that's both optimistic and empowering.

Rosell has published two books: "Failure is Not an Option: Creating Certainty in the Uncertainty of Retirement" (2013) and "Keep Climbing: A Millennial's Guide to Financial Planning," (2017) for the generation that is the first to have less savings than their parents at the same age, according to a 2019 report by the Pew Research Center.

Rosell always kept a journal on his travels and developed a passion for the creative process which led him to write a monthly financial column for Cascade Business News beginning in 2001. His first book was eventually picked up by Mill City Press and garnered accolades from U.S. News & World Report and Fox Business as well as testimonials from public figures including billionaire Charles R. Schwab, Jr. and motivational speaker Brian Tracy.

"The books are a mix of two passions," Rosell said. "I took my passion for adventure travel and mixed that with helping people with their finances. Most people would feel reading a financial book daunting and my goal was to make it not only informative but to make it a book that's actually fun to read."

I took my passion for adventure travel and mixed that with helping people with their finances. Most people would feel reading a financial book daunting and my goal was to make it not only informative but make it a book that's actually fun to read.—David Rosell tweet this

Rosell's success story began at the age of 15 in Lake Placid, New York, when he began a driveway sealing business after his neighbor hired him for a one-off job. Rosell saw that he could make a lot more money finishing asphalt ($25) than he could mowing lawns ($5). Much to his parents' chagrin, Rosell ran the business for 10 more years after graduating from the State University of New York at Geneseo—which funded his backpacking adventures around the world in the off seasons.

"Every chapter in these books meshes a riveting travel story, such as tearing down the Berlin Wall 30 years ago, and leads that into a financial lesson," Rosell said. "Just before there are one too many charts, it goes right back into another travel story of hiking in the Himalayas or being stuck in a safari vehicle overnight in Africa."

Thanks to his work ethic and entrepreneurial skills, Rosell had a lot of cash on hand at a young age, and usually made more than his friends who took corporate jobs. What he really wanted to do was buy a brand-new Honda Prelude—black with power windows—that is, until he learned about the magic of compound interest.

"Albert Einstein called it the eighth wonder of the world," Rosell said. "My grandmother showed me that if I started saving $2,000 a year in an IRA beginning at 19, and stopped when I was 27, I'd have $1 million by the time I was 65 (because of the interest). She told me, 'If you want to be independent of the paycheck, you don't have to do anything extraordinary, you just have to do ordinary things, extraordinarily well.'"

Rosell earned a certificate in wealth distribution from the Wharton School of Business and then began his second business as a financial advisor. After stories of corruption on Wall Street emerged in the late aughts, Rosell cut ties with the corporate parent company he was working through and struck out on his own. Today, he primarily works to design retirement plans for clients who have reached their financial "summit" and are concerned about staying comfortable.

"We don't like to use the word 'retire' because it comes from the Latin word 'to end,'" he said. "But people are living healthy lives so much longer.... For many, this is a whole new phase of life where they can be financially independent."

What is Rosell's advice to millennials who say they can't afford to start saving for retirement because of student debt and rising costs of living?