Finishing Is What Matters | Outside Features | Bend | The Source Weekly - Bend, Oregon

Finishing Is What Matters

Sharlene (Shar) Tobin's first running shoes were a pair of white Adidas "Countries" with green stripes—the smallest size made for men. That was in 1971 when she lived in Kailua, on the windward side of Oahu. Tobin first began running barefoot in the nearby parks in order to give her new black lab—who was prone to getting away—more exercise.

Forty-eight years later, at age 82, she's gearing up for her 66th half marathon this weekend in the Happy Girls Sisters run, where she will be joined by her oldest daughter, Mari Siceloff, and her daughter-in-law Elizabeth Tobin. 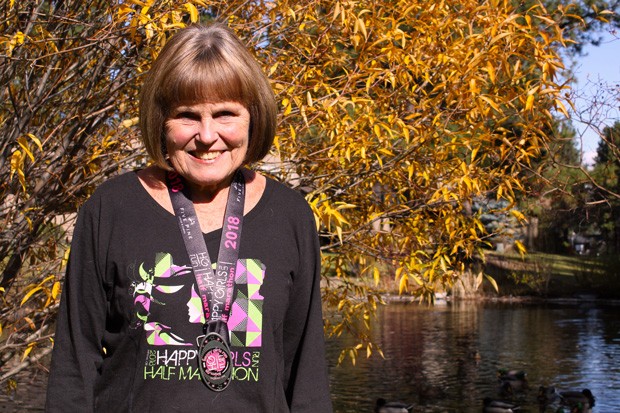 "One of the neat things about the Happy Girls races, why I will always support them, they celebrate women's running, period," Tobin said. "All of the Happy Girls races are less competitive. It doesn't matter how fast you are, what age you are, everyone feels honored... finishing is what matters."

Tobin ran her first long-distance race in 2001—the Portland Marathon—thanks to the encouragement of Siceloff, who was originally inspired to run by her mother. Tobin's first half marathon was also that year, on Washington's Mercer Island. After those races, she made it a goal to try to run a marathon in or near all the places she had lived since she starting jogging in her 30s, which included races in Honolulu, Seattle, Washington, D.C., and Big Sur, California. She has currently earned 65 medals for half marathons. Now the plan is to finish 84 half marathons by the time she turns 84 in June 2021, which will also be her 50-year anniversary of running.

"One of the reasons I'm still able to do this is I have never really pushed myself; I've not done speed work," Tobin said. "I'm out there enjoying the experience, trying to train mostly on soft trails."

Typically, a half marathon takes Tobin between 3 to 3 ½ hours. She plans to "fast walk" the race this weekend, mostly at the insistence of Siceloff, who witnessed Tobin take a bad fall during the Happy Girls Sisters race three years ago. Tobin still finished the race, but ended up with 24 stitches in her arm.

"What she doesn't know is that I run by myself," Tobin said, laughing.

On the day of our interview, Tobin completed a 10-mile training run around the golf course at Widgi Creek Golf Club, where she lives with her husband Toby.

"I owe my good health and my strength to just staying on my feet and doing what I can," Tobin said. "I'd like to see everybody running a little bit if they're able to, because it does so much for you."

Tobin also notes that running has helped her in many other aspects of her life. She's called both Portland and Hawaii home, but before moving to Bend, Tobin and her husband lived in Poulsbo, Washington, for 23 years, where she worked as a kindergarten teacher. She would rise at 4am to run before co-teaching 50 students in the morning and another group in the afternoon. With that many young kids to manage, difficult issues would inevitably arise, but the answers often came to Tobin during her morning jog.

Nowadays, Tobin's daily runs on the golf course have an altruistic mission: collecting stray golf balls—the highest count was 23 in one day—to give to her neighbor, who cleans them and sells them at Widgi Creek events. Last year, the $7,000 in proceeds went to MountainStar Family Relief Nursery.

Tobin's races in the Pacific Northwest are often a family affair, with Siceloff coming over from Seattle to run with her mom. While Tobin doesn't like to brag about her abilities, Siceloff will often encourage other runners by sharing her mom's age.

"There are all kinds of women in Happy Girls and there are always some you can see are really having a hard time," Tobin said. "Usually when Mari tells them about me, their response is, 'If she can do it, I certainly can.'"

Tobin is already looking forward to her post-race tradition with her daughter, sharing frozen Cheez-Its (a ritual they started to combat the heat in Hawaii), and a beer, preferably brewed by Tobin's son Sean, an award-winning craftsman for Lewis & Clark Brewing Co. in Helena, Montana.

"I think it's just encouraging women to get out and run and have fun. The girls that do it are happy girls," Tobin said. "The neat thing about Sisters is the scenery, the mountains poke out here and there... it's beautiful."

Editor's note: Happy Girls is run by Lay It Out Events, the sister company of Source Weekly.