Fires near Warm Springs and Sisters are keeping firefighters hopping—and keeping the region full of smoke.

That could be a good sign or a bad one, depending on how you look at it. In some cases, it's an indication that firefighters are putting those fires out—but it also means that homes and wildlife are still in danger.

At the Milli Fire west of Sisters, firefighters have been conducting "burn out" operations, causing a large column of smoke to rise above the fire. At the same time, winds estimated to be between 20 and 25 miles an hour over most of that fire today can also mean more fire activity.

According to a release from the Southwest Area Type 1 Incident Management Team, Gov. Kate Brown invoked the Conflagration Act Thursday in response to the Milli Fire, allowing the Oregon State Fire Marshal Green Team Incident Management Team and five task forces of engines to help protect structures near the fire, burning about nine miles southwest of Sisters. As of this morning, that fire was estimated at 4,565 acres and was 0 percent contained. As was the case yesterday, the Crossroads and Tollgate subdivisions were under a Level 2 "Be Set" pre-evacuation notice, with the Tollgate subdivision under a Level 1 "Be Ready" pre-evacuation notice. About 1,500 nearby residents are affected by that fire. 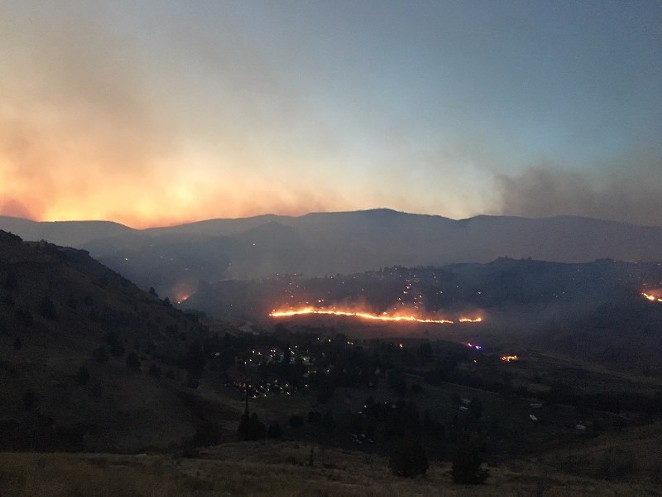 Meanwhile, the Nena Fire in Warm Springs has grown by another 6,000 acres, bringing the fire's total acres to about 46,000. The Oregon State Fire Marshal reports today that the fire is 40 percent contained.

On Thursday, the Fire Marshal's office reports that an ember from the fire blew beyond the containment lines near Kishwalk, running into the grass and brush and pushing the fire over the Indian Head Canyon and Charlie Canyon. That moved the fire about one mile east of Kah-Nee-Tah-Resort. The resort is at a Level 3 "Go Now!" evacuation, but the Fire Marshal's office reports that the threat to the resort is gone. As planned, any visitors at Kah-Nee-Tah will stay put.

The areas of Charley Canyon, Webster Flat Road, South Junction, Culpus Bridge and Wolf Point Subdivision are also at a Level 3 Evacuation notice. The Red Cross has an evacuation center set up at the Warm Springs Community Center for people who have been evacuated.

Road closures: Hwy. 3 to School Flats, Hwy. 8 to Kah-Nee-Ta Village, Webster Flat Road and Culpus Bridge (except those going to Kah-Nee-Ta) are closed to all traffic. Law enforcement officers are re-directing traffic into the Kah-Nee-Ta Resort. Drivers will go through Wolf Point Subdivision to Culpus Bridge into Kah-Nee-Ta.


If you're having trouble handling the smoke and ash in the region right now, visit OregonSmoke.blogspot.com for more health-related information.