Firefighting in the Era of Megafires | The Source Weekly - Bend, Oregon

Firefighting in the Era of Megafires

Firefighters have drawn containment lines for 20% of the Cedar Creek Fire, and indirect lines for as much as half of it. How it's fought and how it grew looks different than it did just 10 years ago.

The Cedar Creek Fire was just one of up to 30 spotted after a lightning storm crossed the Cascades on Aug. 1. Rappelers went out in helicopters the next day to respond, but couldn't find a safe access point to the then-5-acre fire. Helicopters dropped water on the fire most of Tuesday, but by Wednesday it'd grown to an estimated 100 acres.

Nearly two months later the fire is over 114,000 acres, and burning in inaccessible areas not conducive to building line support, using dozers and other direct firefighting techniques—so firefighters are using an "indirect" firefighting strategy. One thing the Cascade Crest is conducive to is wildfires; good soil, plenty of moisture and moss that spreads fires up trees and makes it easier to spread. An indirect strategy identifies areas around the fire where firefighters can make a stand.

"That can be 100 feet, that could be 15 miles based on what you have available as options," said Northwest Incident Management Team Operations Section Chief Chris Orr. "With the tremendous fire behavior that was coming out of this, you could not be close to it in a direct strategy; you come out to some distance where you're much more likely to be successful by making a stand there. We look at areas with breaks in fuel, changes in typography in our favor and existing barriers that we could improve upon to be successful."

He cites fuel accumulation from fighting other fires, and the resultant larger fires as reasons for the change in approach, with a lesser focus on "containment."

"Years ago, when we were able to have smaller fires that we could get around, containment made more sense. The last six, seven years in the era of mega fires with the drought in the West, the fuel accumulations, the lack of resources, we're not going direct on every fire anymore. So, containment is not the term that best fits it," Orr said.

Firefighting strategies changed over the past decades as fires have spread faster, all while the wildland firefighting workforce shrank. In June about 20% of Oregon's federal firefighter workforce positions were vacant.

A changing view of fire's place in an ecosystem has also impacted how firefighting has changed. Fire is so built into the ecosystem that plants like the Lodgepole pine's cones must be exposed to high heat before they can release seeds. While firefighters 10 or more years ago may have rushed to extinguish a fire as quickly as possible, now they account for long-term impacts on the landscape.

"I keep going back to those same areas where we caught it small, and now it's just burning all around it under worse conditions," Orr said. "If we can have the conditions where we can allow fire to do its thing to reduce the fuel loading, buffer it for the next year and the next 30 years to come, we're all in a better spot." 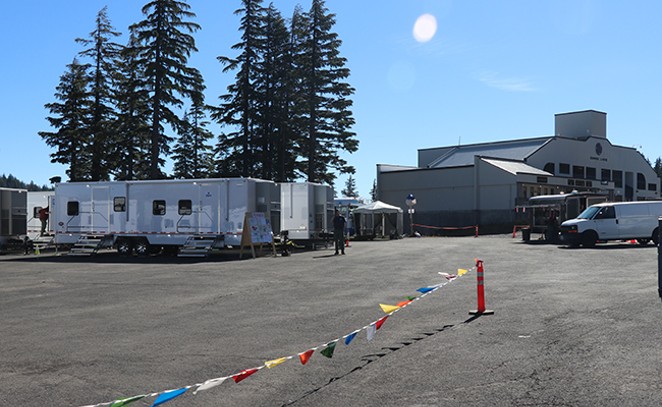 The firefighters are working on an eastern and western front on the Cedar Creek Fire. In the east, the Northwest Incident Management Team 7 is working on reducing fuel along the Cascade Lakes Scenic Byway, Charlton Lake Road and several forest service roads. In the west Northwest Incident Management Team 9 is "firing operations" to eliminate fuels and bring the fire closer to existing containment lines. The fire is about 15 miles east of Oakridge, which at one point evacuated the whole town. Now parts of the Deschutes and Willamette National Forests are subject to closure orders.

Smoke from the fire drifted into Central Oregon but has more often traveled northward. From there it can travel across the globe as it latches onto the jetstreams in the upper atmosphere.

"Some of our fires have gotten smoke on the East Coast. I have family in Michigan that has complained to me, 'We've got your smoke,'" said Alan Hageman, NWIMT7's public information officer. "If you're healthy, it's annoying. If you're not healthy it can be a game changer."

"If we can have the conditions where we can allow fire to do its thing to reduce the fuel loading, buffer it for the next year and the next 30 years to come, we're all in a better spot."—Chris Orr tweet this

Once the fire is contained and even once it's burned itself out there's still work to be done. Wildfires leave hazardous burned-out trees in their wake that look healthy but can fall shortly after a fire ends.

"There will be hazards from this fire, there will be, and those have to be identified and mitigated or removed before that access is there," Hageman said.

As fires get bigger and faster, Orr and Hageman said people need to become more adjusted to life in an ecosystem prone to fire. Evacuation orders may be issued even if a fire is over 10 miles away. Smoke isn't going to go away. And people will have to become responsible for their own property.

"I used to work in Yosemite, and in California defensible space for a lot of people is like second nature. And then when I came to Oregon, it seems like not everybody's got the memo," Hageman said.

Defensible space can involve whole remodels like replacing shake shingle roofs, using cement siding and decks and installing fire-resistant ventilation. It could also involve how a property is taken care of, including things like clearing wood from under decks, keeping firewood more than 30 feet away and not having trees and foliage near a house.