Fires in the Forest

Two fires started off China Hat Road near houseless camps in April, the first torching an RV and the second igniting a pickup truck. There's been an increase in camps staying longer than the 14-day stay limit over the last year, according to Deschutes National Forest Public Affairs Officer Jean Nelson-Dean.

The fires alarmed nearby homeowners who've been contacting local Forest Service officials to voice their concerns. An Instagram account documenting the fires and calling for the removal of illegal campers, called Best of China Hat, has quickly gained over 4,000 followers since its first post on April 2. On April 15 Deschutes County Forester Ed Keith met with adjacent homeowners and advised them how they can protect their property in the event of a fire. 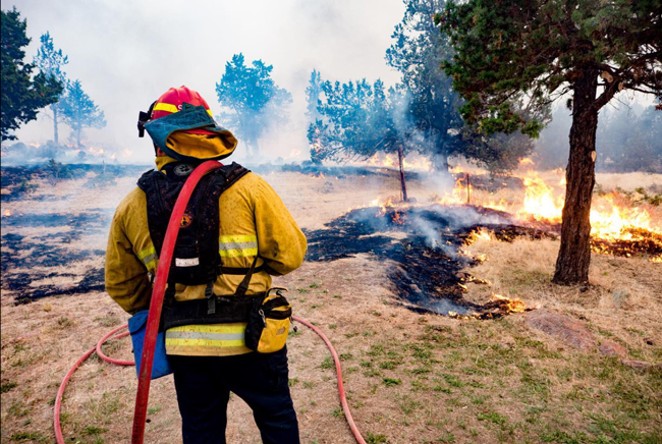 "We're spending a lot of time on it, which isn't really what we're made for; we're made for land management," Nelson-Dean said. "So we've been working with Deschutes County and the City of Bend trying to find some lasting solutions."

Unlike police from the City of Bend or officials from the Oregon Department of Transportation, the Forest Service can't move campsites and can only ticket those that stay for longer than 14 days. Those tickets are sent to federal courts, where they've proven less than effective.

"What happens is the federal magistrates have kind of bigger issues that they're dealing with it within the federal courts. Also, those people may or may not show up for a court date. So, it's not a very effective tool," Nelson-Dean said.

The Forest Service conducts fuel reduction in the area around China Hat, which involves thinning of trees, mowing of brush and prescribed burns to reduce the chance of a fire spreading. Nelson-Dean said it doesn't end there, and that the Forest Service is trying to be proactive in preventing fires in the area.

The Forest Service targets areas close to communities for its fuel reduction. The Deschutes National Forest is over 1.6 million acres, but doesn't monitor and treat remote areas like those adjacent to a community.

"Deschutes National Forest is a little unique in that you can have one foot in city and one foot on the National Forest. So, we do focus a lot of our work near subdivisions near communities that are directly adjacent," Nelson-Dean said.

Human-caused fires account for about 70% of wildfires, and the rest typically start from lightning strikes. Deschutes forest lands are still popular recreation spots for campers, and an analysis from the Deschutes National Forest found that human-caused fires did not increase last year, despite growing, though Nelson-Dean said the results are preliminary and a more detailed analysis is on the way.

First responders to the two fires in April contained them before they could spread, as is the case with 98% of wildland fires, according to Nelson-Dean, though naturally-caused fires are relatively common in Central Oregon.

"We are a fire dependent ecosystem here, our ponderosa pines were created basically, because there was fire, we're not like the west side. And so natural ignitions are something that we expect, but we don't need those human-caused fires," Nelson-Dean said.