When you think hotel bars, the words campy, eclectic, and inviting may not come to mind. You also may not think of a hotel bar being the perfect place to hang out with your pals. But "The Times," as Bob Dylan sings so well, "They Are a-Changin." Take for example the new Canteen at Campfire Hotel & Pool Club in Bend. Neither the hotel nor the bar would be considered typical.

The freshly renovated Campfire Hotel, smack dab in the middle of NE Third Street in Bend, offers vintage camp-inspired, dog-friendly guest rooms, an onsite heated swimming pool, a hot tub, an enormous outdoor firepit, and an arrangement with Breedlove guitars providing instruments for guests on-site. Add to that a hip, funky bar right off the main lobby overlooking the pool, hot tub, and firepit and you have the ideal chill Central Oregon vibe and a perfect hangout for friends, family, and business associates. 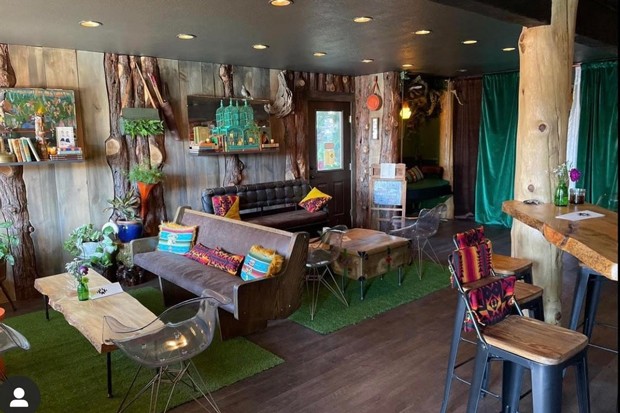 The Canteen at Campfire is brought to you by the same owners of The Dogwood Cocktail Cabin in downtown Bend. Doug and Phoebe Pedersen set out with the goal of making Canteen a small hotel version of their popular bar and kitchen. As Doug puts it, "The Canteen will be a 'greatest hits' of Dogwood along with new drink menu editions keeping the campfire and poolside in mind." Think after dinner hot cocktails at the firepit and party at the pool with frozen tropical drinks, depending on the weather and time of year. The Canteen décor also reflects the vintage, campy style of Dogwood with a mid-century modern twist. Doug says he and Phoebe immediately connected with the aesthetics at Campfire and the Canteen idea came together very quickly and organically after meeting the owner and seeing the place.

Here's a bit of history on the Pedersen's and Dogwood. Doug and Phoebe met in Portland years ago and on their very first date decided they wanted to open a bar together. They moved to Crested Butte, Colorado, and turned a condemned miner shack into the original Dogwood Cocktail Cabin. A desire to be back closer to family in Oregon led them to Bend about eight years ago, opening The Dogwood Cocktail Cabin downtown at 147 NW Minnesota Ave. shortly thereafter. An instant hit, The Dogwood has been voted Best Bar & Best Specialty Cocktail (for Poco Loco) by Source Weekly readers over and over again. And Phoebe's beet-infused vodka cocktail, the Beetnik, has even been featured in Bon Appetit magazine. By the way, the Pedersens now focus all of their attention on the Bend enterprises, letting go of the Crested Butte Dogwood a while back.

While The Dogwood downtown will continue offering its delicious non-traditional Americanized tapas and small plates, the Canteen is serving up snacks such as house pickled seasonal veggies, Campfire Trail Mix and globally inspired grilled sandwiches such as And The Beet Goes On with smoked beets and goat cheese, and the Muffeletta-y with salami, ham, provolone and olive tapenade. There's also the Mexican S'more – Du for Two for dessert, all delivered on metal trays (keeping with Campfire's camping theme). 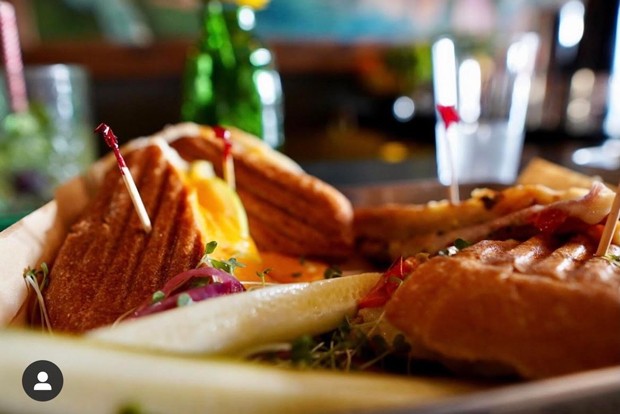 You can expect your favorite Dogwood cocktails on the Canteen menu, such as the not-too-sweet, not-too-spicy Poco Loco, the house-infused habanero vodka martini with pineapple that was yet again voted 2021's "Best Drink in Central Oregon" in the Source. There's also the Camp Collins with gin and Herbsaint, the Campfire Old Fashioned with peated bourbon, bitters and burnt orange, and the Sexy Thyme, with dry vermouth, strawberries and thyme, along with a handful of beers, wines and ciders. The drink menu changes seasonally.

"We're excited to be open and we think it's going to be a fun edition. If you like The Dogwood, you'll love the Canteen, which we're saying is the same Dogwood experience in a different atmosphere," Doug says. Starting this week, Canteen's hours will be Tuesdays, Thursdays and Sundays 3pm to 10pm; Fridays and Saturdays 5pm to midnight and closed on Mondays. Upcoming events include a grand opening celebration on Nov. 21 at 7pm, a Christmas Carol – Drag Bingo on Dec. 19 and a New Year's Eve party on Friday, Dec. 31. You can get details on Facebook.com/glampcity.

This campy, fireside, poolside version of one of Bend's most popular establishments is sure to be a hit with both visitors and locals alike.