Last year, a man lit Pilot Butte on fire. This year, city leaders are coming out en masse to prevent illegal fireworks and respond to complaints

Fireworks are part of the American DNA. They're how we celebrate Independence Day, New Year's Eve and other milestones. Used responsibly, they can garner oohs and awes from people sitting in lawn chairs watching the colors explode overhead and listening to the sonic booms. 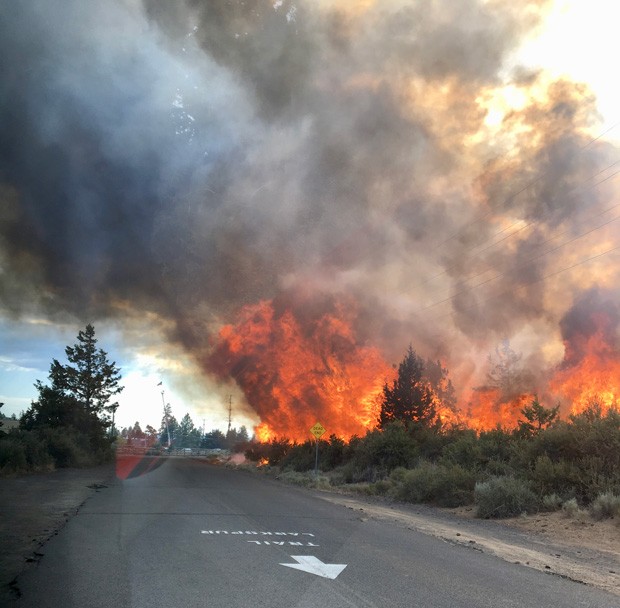 However, if used irresponsibly, fireworks can cause property damage and even loss of life.

According to the National Fire Protection Agency, on average each year, fireworks start 18,500 fires, cause an average of three deaths and 40 injuries and result in $43 million in property damage.

Last July 4, a 29-year-old Bend man accidentally lit Pilot Butte on fire with an illegal firework. The blaze burned about 10 acres and left 27,000 people without power. Alan Stout got 90 days in jail and was ordered to pay about $20,000 in restitution.

Bend Fire Department's Battalion Chief/Public Information Officer Dave Howe said the way the winds were blowing that day, the fire easily could have jumped Hwy 20, and if it had been a little drier last year, it would have.

"The biggest issue with fire spread in a wildland fire is the ember storm and flaming brands, which can blow out ahead of a flaming front and ignite spot fires as much as one-quarter to one-half mile downwind," Howe said. "So we ask people to remove anything combustible for 5 feet around any wooden structural element like a house, a fence or a deck."

This year, the City of Bend is pairing police officers with fire inspectors for an Illegal Fireworks Task Force to respond exclusively to illegal fireworks calls in late June and early July, according to the City. The Task Force is scheduled for the nights of June 27 to June 28 and July 3, 5 and 6.

Bend Police Department Lt. Clint Burleigh said July 4 is the department's busiest day of the year for fireworks and fireworks complaints. He said Bend PD is planning on having its staff occupied throughout the 24-hour period of July 4—hence, the Task Force will be not responding to calls that day.

The City said the Task Force will patrol areas where data have shown a higher use of illegal fireworks. Burleigh said the usage areas are fairly spread out, and said the Mountain View Neighborhood Association has done a great job working with residents to get more specific information on what they've witnessed over the past several years.

"We are working on where to focus from the data of previous years and any additional information that has been given to us by some of our community members," Burleigh said.

Howe said the department averages about 28 to 32 calls per day, but on July 4, that number goes up to between 50 and 60, including medical, fires, traffic crashes and other calls. Burleigh said the PD's call data comes from 911 calls, so they don't have exact numbers, but the highest firework complaint calls have come on July 4 for the last three years.

According to the Deschutes County District Attorney's Office, the sale, possession or use of illegal fireworks is a Class B misdemeanor, with a maximum sentence of six months in jail and a $2,500 fine. Users of illegal fireworks can also face potential civil penalties of up to $500 per violation, restitution for damage to property and fire suppression efforts and other criminal charges like reckless burning or criminal mischief.

Burleigh said the PD plans to issue citation and seize illegal fireworks during the Task Force. According to City of Bend code, people who are cited face a $750 fine in addition to the state fines.

Fireworks went on sale statewide June 23. Howe said people should follow some basic tips to keep their property safe while using legal fireworks. He recommends using fireworks in an area cleared of combustible materials—like bark mulch—at least 30 feet from anything that can burn, like a house, fence or barn. Howe said to have a hoseline at the ready and submerge spent fireworks in a bucket of water after waiting for them to cool for 30 minutes.

For furry friends, Howe said people should put dogs in the house, preferably in a quiet interior room with a fan or other white noise-making device on.

Already this year, three brush fires have started in Bend. Howe said the tall grasses will be dry and cured by July 4 and the best way to prevent a brush fire is to avoid using fireworks, and to remind people that legal ones can start fires as well.

The Bend July 4 Fireworks Festival is set to get cracking at 10pm when the mortars start launching on Pilot Butte. People can see the display from most locations in Bend with a view of the Butte.

Howe says people who want to watch fireworks should leave them to the pros.

"The use of illegal fireworks, by definition is against the law," Howe said. "It is very risky in terms of fire safety—people's houses can burn down, devastating wildland fires can start, fireworks can maim hands and faces and the fuse lighter is responsible for any and all damage that his device may cause, including the costs of fire suppression."