"Disaster!" comedy brings it all 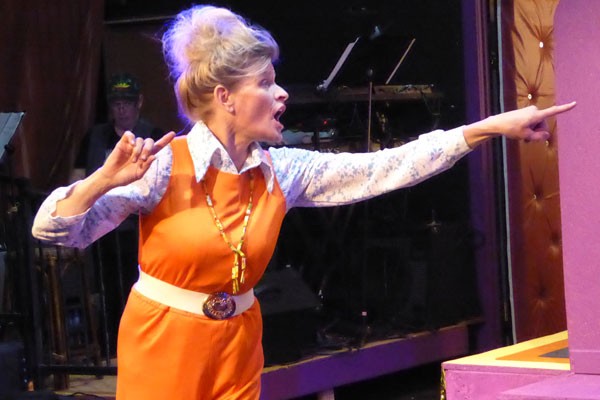 Dennis Giacino, whose 2014 Off Broadway comedy "Disenchanted! The Musical" is currently in international production, is here in Bend to direct Seth Rudetsky's similarly-styled "Disaster! The Musical," opening at 2nd Street Theater this weekend. The Source Weekly asked Giacino what brought him and his partner, "Disaster!" Directorial Consultant Fiely Matias, to Bend to direct this wacky '70s farce.

"I've been here to visit," Giacino said. "I always heard so many great things about the town, how nice the people are." Giacino has lived in Corvallis and still has family in Oregon, so last year, when he saw that 2nd Street Theater was showing "Disenchanted!" here, he brought Matias and his mom to see the show for his mom's birthday. They all loved the Bend production, and approached Managing Director Sandy Klein at 2nd Street.

"I told her if you're ever considering doing a show called 'Disaster,' we would love to come over and direct it. We love the community here and we'd love to be involved—and she took us up on it."

Giacino explained some of the similarities and differences between "Disenchanted!" and Rudetsky's "Disaster!"

"'Disenchanted!' tackles some really hot-button topics – female empowerment, racism, sexual identity. It does it through this sort of zany, vaudeville humor. 'Disaster!' doesn't really tackle big issues like that, though it has a similar sense of humor to it. It is about the 1970s disaster films, only put to music."

Klein predicts the play will have audiences singing along to the old chart-topping hits. Giacino thinks she may be right.

"It's kind of like, try and stop yourself from singing 'Hot Stuff,' or 'Hooked on a Feeling.' Each night after rehearsal I'm walking home singing, 'I'd Really Love to See You Tonight,' or 'Come to Me,' or 'A Fifth of Beethoven.' It's not a sing-along show, but you'll recognize the music and want to, and certainly we won't discourage it."

"Disaster!" promises to be an upbeat production. "Because it's set in the 1970s, it has all those wonderful colors. Bellbottoms. And of course, the music, songs everybody knows. Donna Summer, Lionel Richie, Barry Manilow. Even when there's a ballad it's still a hoot, still upbeat."

The story begins with a promoter throwing a party for the grand opening of his new casino, which floats on the Hudson River – on a fault line, of course. "A despicable character. There has to be one in every disaster movie. It's gotta be their fault that the disaster happened. It's never Mother Nature, but how we didn't listen to Mother Nature.

"At one point he's singing, 'Don't Cry Out Loud' while he's being eaten by sharks and piranhas. You can't beat that."

In keeping with the disaster theme, volunteers will man a Red Cross table in the theater lobby during Saturday performances. "Sound the Alarm," a program of the American Red Cross in which teams of volunteers install free smoke alarms in cities across the U.S. , will end May 13. For more information visit redcross.org/sound-the-alarm.