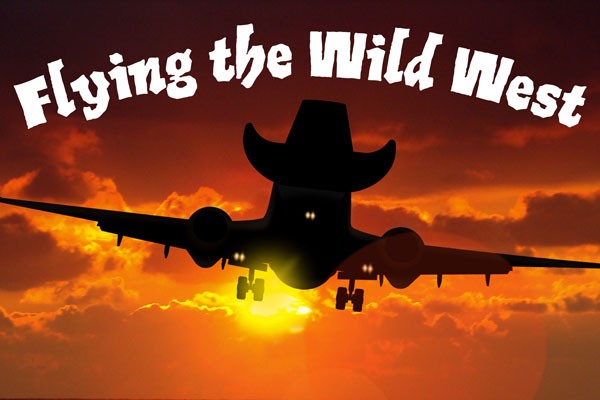 Wearing a San Francisco Giants hat around Bend can elicit remarks, depending on where you go. (Hint, don't go to Sidelines wearing one.)

Case in point: It might be considered poking the bear to purposely wear one as you stand by the baggage claim when the 11:33 am flight from Los Angeles lands at Roberts Field.

Fly from the Redmond Municipal Airport during a busy time of year and it's clear the place is getting too small to accommodate the number of passengers it gets. To borrow a scene from "Tommy Boy," it's like the airport is David Spade's jacket, and the passengers are Chris Farley, trying to cram a bigger body into clothing fit for a much-smaller frame.

Security is seeing the crunch, for one. According to Erinn Shaw, office assistant III for the Redmond Municipal Airport, if you're looking to fly out early in the morning, you'd better come early to get through security.

"There are 250 people in line in the morning. You need to be here two hours early, or you'll miss the plane," Shaw told me.

Stats at the Airport

Currently, there are 25 daily flights a day in and out of Redmond. Recent data from the airport shows that in March of this year, there were more than 30,000 deplanements—or passengers unloading from the plane—and about the same number of enplanements—or passengers loading the plane. In 1998, there were a mere 10 direct flights from Redmond, Shaw said. The population of Bend in that year was 34,154 and Redmond was 12,037, according to data from the U.S. Census. In July 1998, there were roughly 12,000 passengers flying into and out of the Redmond Airport. Fast forward 10 years to 2008, and the population of Bend was 76,807. Redmond was 23,354. The airport saw about 23,000 passengers flying in and out during July 2008.

With Bend regularly ranked among the United States' fastest-growing towns, it's no surprise that the numbers at the airport would steadily climb, too. According to VisitBend, in the summer of 2017, 63 percent of visitors were from out of state. Their data showed 18.6 percent were from California—4.5 percent from Los Angeles and 6.8 percent from the San Francisco Bay Area.

But to get the real-life flavor of where our influx comes from, our editor at the Source Weekly decided to park my butt in the airport for an hour on May 24—the early start of Memorial Day Weekend—to see what's the hubbub, bub.

At 10:55 am, I walked in through the spinning front door, past the men mowing the strips of lawn that separate the parking areas from the terminal. After sitting in a faux-leather chair for a couple of minutes, I decided letting the airport staff know what I was up to sounded better than getting questioned—or worse, arrested.

My forethought resulted in a thorough tour of the airport, getting to use the staff-only hallway around security—score one for the Source—via the aforementioned Shaw. About 150 people were there, waiting to catch planes; most on cell phones, some reading paperback novels or sipping coffee. A nice white dog stopped from preening its paws to lick my hand. Things were rather hum-drum on this side of security.

Back on the other side, I plopped back down in a seat near baggage claim and took notes.


A woman being pushed in a wheelchair comes in from the tarmac. She's old and frail—and she's wearing a full-length fur coat. Maybe this is L.A., after all. click to tweet

11:15 am: The five rental car lines are empty. Four people are sitting and presumably waiting for passengers. I mean, why else would you sit in the airport at 11—unless you're me, of course. A young blonde woman working at the Hertz counter picks up the phone. She's over her head with the call and has to tell the person on the other end they're sold out and no, the manager's not in.

11:20 am: A member of the security staff comes in and gives small talk answers to the four waiting by the baggage claim. He gives me a pinched look. Shaw has my back.

11:25 am: The door opens from the runway and a woman sprints across the airport with a big fluffy dog leading the way. "A huge pee!," she says upon her return to the baggage claim. At about the same time an older, white-haired woman taps her wrist and looks at the older, white-haired man standing next to her. "Can you believe how long it takes for them to get off the plane?" Must not be from L.A., I noted.

11:26 am: The rental car lines are filling up—at least as full as they can be on a Thursday in May. A friendly greeting in Spanish between two men. Hugs and kisses between a youngish man and I presume his significant other. Hand holding.

11:28 am: I'm on the end of my seat with anticipation. The baggage carousel, well, it's just sitting idle. No buzzing or red lights flashing. Two private drivers show up holding name cards. No tuxedos mind you, this ain't La La Land—yet.

11:30 am: The plane must be empty of passengers. Small pods of people congregate around the metal snake, waiting for its buzz and their baggage. Some are on phones, others stand with crossed arms, sussing out the day's plans.

11:32 am: I'm in a sea of LA Dodger hats and t-shirts. If you don't know baseball, Giants and Dodger fans get along about as well as Crips and Bloods. "Nice hat," someone mutters as I go to ask the family why they're in Bend. "Giants suck," another guy says as he shoulders his luggage and leaves me smiling in his wake.

11:38 am: Bleached blonde women stride into the lobby wearing chic jeans, torn in the knees and probably costing more than my first car. The women are speaking a sort of Valley Girl-ese to their hordes of children who are running helter-skelter through the airport, while the women try to use cell phones without ruining their manicures.

11:42 am: The baggage claim area is full and people are starting to grumble. As if on cue, the buzzer sounds, the red lights come on and the long, metallic snake comes to life. People spot their luggage like truant children, step briskly to the snake, grab their brightly colored bags and yank them off the conveyer, as if ready to give the inanimate objects a time out.

11:45 am: Shit. The baggage snake stops. People are grumbling louder. "If I miss my ride..." or other veiled threats are made to no one in particular. A woman's voice over the loudspeaker: The pilot has made a mistake; if you're going to San Francisco, you need to board. Quickly. A mass exodus from the other side of security.

11:47 am: Whew! The metallic snake is back in action. People bustle around it like baby animals waiting to be fed. A woman being pushed in a wheelchair comes in from the tarmac. She's old and frail—and she's wearing a full-length fur coat. Maybe this is L.A., after all.

11:50 am: Someone smells like stale beer. Kids run around or are eating ice cream. A Big Mt. Heli Tour video plays on the television. Three lonely bags make their S through baggage claim like misfit toys. Nearly everyone's gone.

11:54 am: The rental lines have disappeared. Three new people sit and wait for the next round of passengers.

11:56 am: The snake goes dormant. The lonely woman at Hertz shifts from side to side, awaiting the next plane.

Noon: The bodega is empty. Its bottles of water and soda sit in coolers. Two young employees are bustling around, restocking books, magazines and snacks, waiting for the next rush of customers. Stepping outside, the lane reserved for drop off and pick up is full. The smell of freshly cut grass is in the air. The sky warns of an impending thunderstorm. "Welcome to Central Oregon," I say to the cars driving away.

Compare the stats about deplanements and enplanements to a little more than two years ago and the growth is significant.

According to the airport's most recent Master Plan, the forecast for 2036 is 680,750 enplanements. (One low spot: May 2016, when there were fewer than 10,000 passengers flying in or out of the airport, due to a three-week closure for runway construction, Shaw said.)

"American continually evaluates its network to ensure we are maximizing our fleet and profitability while matching customer demand," Ross Feinstein of American Airlines, said. "We serve RDM from Los Angeles and Phoenix."

Shaw said Alaska Airlines is planning to add a Boeing 737, which can sit up to 149 passengers, according to Boeing.com. The flight will be from Redmond to Seattle, and is scheduled to leave Roberts Field at 2:30 pm, Shaw said.

As of now, most of the flights are to and from Seattle. Shaw said the current planes average about 76 seats, except the United flights to San Francisco, Denver and Los Angeles, which have about 100 seats.

Shaw said the airport is going to be expanded: the terminal, runways, parking... the whole enchilada. According to the airport's Master Plan, the main runway is scheduled to expand by nearly 3,000 feet to give it a total of 10,000 feet to service customers in the Midwest. The airport's preferred option would be expanding the runway to the southwest, staying in the airport's current property boundary. An additional 1,083 parking spaces are required to fulfill the Master Plan. The airport's alternative 1 would add an estimated 4,000 spots and would be developed directly adjacent to the current parking area. Other alternatives would create between 1,600 and 3,100 new parking spots. In addition, the airport is looking at developing property near the Deschutes County Fairgrounds Expo Center for expansion of rental car facilities, new long-term parking and remote parking. For current parking information, there's a ticker at the top of the airport's website, flyrdm.com, that shows the available spots, updated every 30 minutes.

Redmond Airport Director Zachary Bass said the money for the improvements comes mainly from a Federal Aviation Administration grant—93.75 percent to be exact—and the rest comes from the airport. Bass said the Master Plan is currently under review by the FAA and once approved, will go to the Redmond City Council for final approval.

Spending an hour in the airport taught me a few things. During the midday, it's one of the most relaxing airports to fly out of. Security's a breeze and the restaurant is open, so you can dine and drink or just stare out the big windows and watch planes land. Will our little airport turn into PDX, where you're advised to give yourself three or four hours to catch a plane? Only time will tell.

1942: The City of Redmond leased Roberts Field to the U.S. government to build a bomber base for World War II.

2007: Allegiant Air adds direct flights to Las Vegas (these have since been rescinded).