Food Cart of the Year

At The Tin Pig, the chicken is the star of the show

It is impossible for someone to mention The Tin Pig or even The Podski without me instantly craving a chicken sandwich. Whether it's the spicy Nashville Chicken, or the Sweet T that comes with pimento cheese and honey, foodies around Bend know The Tin Pig is the place to go for a chicken sando cooked to perfection... or maybe some hush puppies? Dang.

Owner Jack Tate, a native of Tucson, Arizona, who's spent his career as a chef helping open over a dozen restaurants—including Immersion Brewing in Bend—says The Tin Pig's menu started out having a lot more variety, but with chicken being the star of the show, he's focusing these days on what makes customers happiest. Tate and partner Matthew Gutierrez are both from the Southwest, and Tate's wife Yvonne is from the South—so when they started out in 2018, the cart combined both of those regional flavors more distinctly. 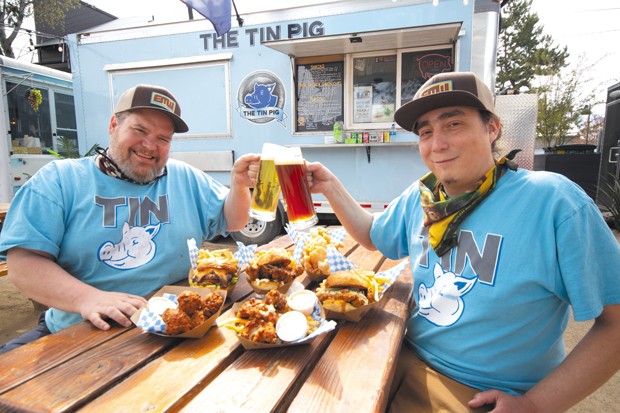 "A lot of the Southwestern things have faded," Tate said. "When I started, the menu was a lot different—more pork. The chicken just kind of took over. I love barbecue and smoking meats—they just took second fiddle to the chicken."

Don't go thinking The Tin Pig is a one-trick pony, however. Burgers are still a hit, too, and Tate still cures his own pork belly. Another popular item is the Carolina burger, served with what Tate calls "Carolina BBQ sauce," a mustard-based sauce that's also found on the Big Bird—yet another chicken sandwich served with a healthy dose of buttermilk slaw.

Side dishes at The Tin Pig also stand out, including the hush puppies and the fried green tomatoes, which come with a dusting of red chili. 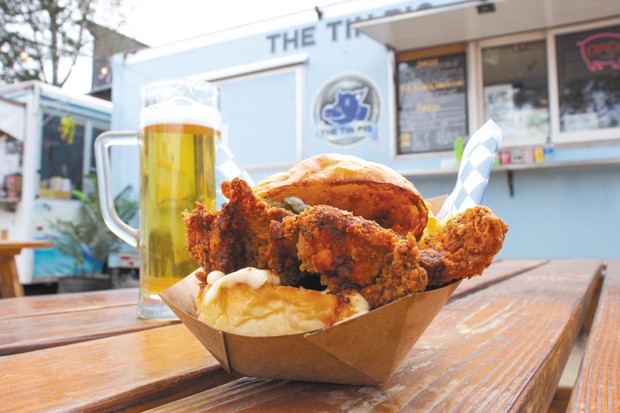 "Everyone is addicted to my fry seasoning," Tate said. While spice is a defining feature of many of The Tin Pig's dishes, for the fry seasoning, the secret comes from the opposite end of the spectrum. "The trick is the sugar that I put in it. No one is expecting it," Tate said.

Located in The Podski near the ever-popular Box Factory, Tate credits at least part of his success—including winning Best Cart in this 2021 Restaurant Guide—to being in the company of other beloved Bend carts.

"Only being open for three years, I am very lucky and very thankful I got put into a cart next to Big Ski's Pierogi and Thailandia," he noted. "If it wasn't for them, I wouldn't have been noticed at all." 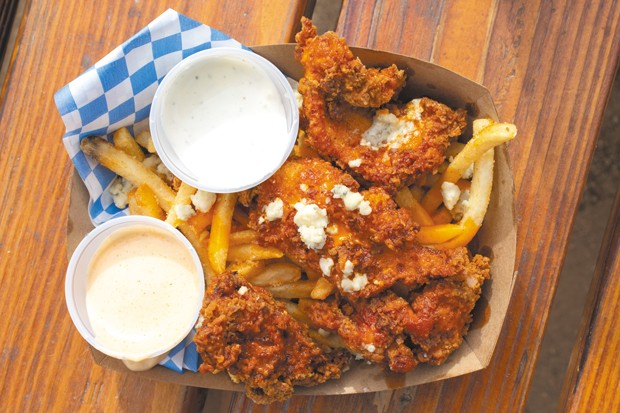 
Editor's note: A previous version of this story mentioned fried pickles. There are no longer fried pickles at this cart. We regret the error. Truly... because we love fried pickles.