....and what local chefs learned from them

Admit it. You have failed more than once in the kitchen while challenging yourself during this pandemic. Your soufflé flopped. Your sourdough boule refused to rise. Your duck à l'orange disappointed. 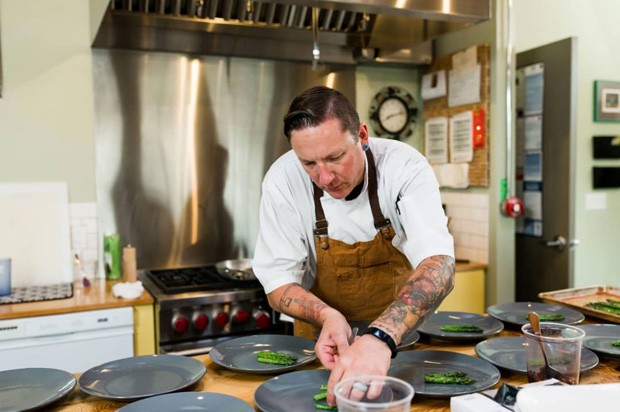 Don't despair. You are not alone. Even professionally trained chefs fail spectacularly. In fact, a few local chefs have shared stories of their favorite food fails so we can learn from their mistakes and feel better about our own.

While prepping ingredients to make chocolate-coated strawberries at a Redmond restaurant several years ago, former Crux Fermentation Project Chef Jackson "Rooster" Higdon made a mistake that will forever remain "burned into his brain."

He said, "There must have been 10 to 15 pounds of melted chocolate in that bowl, and it was just a little bit thick. And I know better than this, but I got it into my mind that I should thin it out with some water."

Unfortunately, "Water is just not soluble in chocolate," he lamented. "There's a reaction that happens with the fat. But I didn't want to go to the trouble of melting butter, so I decided to add just a tablespoon, thinking, 'Well, it's such a small amount.'"

It was a costly mistake. In a matter of seconds, he watched the entire batch seize. He ended up chucking nearly $75 worth of chocolate. The moral of the story? Always use fat—such as butter or cream—to thin melted chocolate. Otherwise, it will curdle into a grainy texture, and no one wants that.

Chef Instructor Thor Erickson of Cascade Culinary Institute recounted his own chemistry calamity, which happened during the late 1980s when he worked at the critically acclaimed Stars restaurant in San Francisco.

"I was running the grill for an employee picnic," he said. "I saw some quail in the refrigerator, and all this tropical fruit, and I thought, 'Great! Caribbean quail over coals with jerk seasoning!'"

He placed the quail in a papaya-based marinade, and when he returned a couple hours later to pull them out, "It was just like a horror movie. There was no resemblance of a little bird in there. It had turned into some sort of fiberglass plaster. It was just... glue. I thought one of my co-workers had played a joke on me."

Erickson ended up tossing out the entire covey of quail, but he learned a valuable lesson. Papain, a naturally-occurring enzyme in certain tropical fruits, will "tenderize" meat into a puddle of goo in quick order. So, tread lightly when marinating or cooking meat in papaya, pineapple, mango or guava.

I became an Executive Chef not by being great at cooking but rather by making millions of mistakes and just being competent enough to learn from each one." -Jackson "Rooster" Higdon tweet this

Fire in the Kitchen

Like many of us during the time of coronavirus, Chef Josh Podwils set out to master the art of sourdough baking. For his first attempt, he killed the 50-year-old sourdough starter he had adopted from a friend, likely by using overly hot water when feeding it, he said.

On his second sourdough attempt, the founder of Loyaute, a French fine-dining, pop-up eatery, managed to mangle a batch of hamburger buns. "All the rises turned out the way they were supposed to, but I think I may have over-baked them or maybe I over-mixed them," he said. "I don't know exactly what I did wrong, but they came out like hockey pucks. They were absolutely inedible."

For his third response to the call-of-the-wild yeast, he chose a basic loaf of bread. He placed a single batch of dough in his trusty Kitchen Aid mixer for a 10-minute kneading process and stepped away for a few minutes. "The next thing I knew, smoke was billowing out of the kitchen, and the mixer motor was literally on fire," he said.

That was when he decided to give up on baking. "The lesson for me is, if you fail three times, let it go."

According to Erickson, the difference between a cook and a chef is that chefs never fail, because they know how to fix their mistakes.

Higdon concurs. In fact, one of his signature dishes was born when a sous chef ordered a case of buttermilk instead of a gallon. He thought, "I've got to use this before it spoils, so I turned it into a roasted jalapeño buttermilk chowder that I still use to this day."

The secret, he says, is failing forward. "I tell people all the time that I became an Executive Chef not by being great at cooking but rather by making millions of mistakes and just being competent enough to learn from each one."