Food on the Fly

Even amid restrictions, restaurants lift up others

As the world turns its attention to vaccines and the promise of a new year that will bring far better days than 2020's, it might be easy to forget that a few short months ago, thousands of Oregonians lost their homes during one of the most destructive summer wildfire seasons the state has ever seen. Around 40,000 people were evacuated; over 3,000 buildings burned. It can seem like a distant memory for many—but not for those still displaced.

Starting in September, Redmond's Super 8 motel was among several motel sites utilized by the Red Cross and other aid groups to house displaced people who had evacuated to Central Oregon. As the Christmas holiday approaches, dozens of people are still at that Super 8. In Bend, a handful of restaurants have stepped up to feed the evacuees. Some four months after the fires, amid COVID restrictions that have shuttered their dining rooms, restaurants including Joolz, Spork, Bethlyn's Global Fusion and others are still feeding fire victims.

The meal services offered by local restaurants started about two months ago, said Juli Hamdan, co-owner of Joolz restaurant in downtown Bend, when Rogue Food Unites, a nonprofit that offers meals to victims of the Almeda Fire in Southern Oregon, contacted her, looking for help finding food resources for evacuees in Central Oregon.

"They contacted us when the Red Cross was no longer going to feed these people," Hamdan said. "They came up with some FEMA [Federal Emergency Management Agency] funds to help with food and packaging costs. We cover labor and everything else." Hamdan's restaurant, like many others, is operating with far fewer staffers than before COVID restrictions went into place. With only a small space outside the restaurant, operating an outdoor dining space hasn't been feasible, Hamdan said. As a result, the restaurant is operating at a fraction of its usual capacity, doing only takeout and delivery.

With only a tiny staff, offering three to four meals a week—which includes a salad, main course and dessert—has been a significant effort for Joolz, Hamdan said. 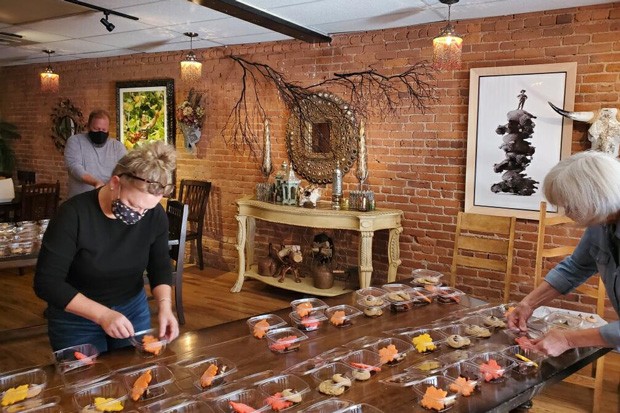 "You really have to, like, get in there and get it out and, you know, get it done, because we're so understaffed right now," she said.

With food prep handled by the restaurants, the next hurdle became delivering the food to evacuees. Enter Angels on Wheels, a Facebook group organized by Central Oregonian Erika Kightlinger. The group, which consists of roughly 80 members, serves as the delivery service for the meals offered by Joolz, Spork and the other restaurants involved. Restaurants put out a call for volunteer drivers, and a group member responds.

"I will just put out like, I need Angel today at 4:45," Hamdan explained, and someone shows up to help.

One of those driver-volunteers is Bendite Sandy Henderson, who heard about the opportunity through a friend.

"To me, if you lose everything and you're living in a one-room hotel in Redmond, it's tough times for everybody right now, but I think doing it at a time when you're a restaurant and you've got already so much stress on your plate—coming from the shut down that the governor's put in place—I think it's a really big deal that she's doing this," Henderson said of Hamdan. "They do these fantastic meals for people and then doing this off their own time and their own energy... I just think it's a really big deal."

As Hamdan and the handful of other Bend restaurants continue to cook for the some 28 evacuees still at the Super 8—all while weathering pandemic restrictions—Hamdan says what they could use most would be for more local restaurants to help out.

"I wish more people would step up and do it, because it's getting really hard," Hamdan said.