For Gyms, It's Modify—or Defy

As some fitness centers conduct business outdoors or make other adaptations, others stay open in defiance

Summer was a fairly easy time for gym owners and managers to adapt their operations to meet health and safety guidelines around COVID-19. Between putting equipment outdoors or simply taking clients out to a park or nature spot for their workouts, adapting to the situation required just a bit of creativity and a solid set of muscles to lug 70-pound weights or rowers outdoors. Now though, with Gov. Kate Brown's current Risk and Protection Framework forcing gyms, restaurants and some other businesses in a majority of Oregon counties to conduct their business outdoors or not at all, creative adaptation is not always enough.

For some gyms, it's meant retaining a fraction of the clients they once had. For others, it's meant openly defying the governor's orders and opening anyway.

At one local exercise studio, its team calls the changes "drastically different, and very challenging."

"We had a member base of about 1,200+ members before COVID hit, and right now we have 300 to 400 paying members—so financially quite a drastic difference," said Stephanie Brown, head trainer for Orangetheory Fitness, a training studio in Bend's Old Mill that offers circuit-based, high-intensity interval training using rowers, weight equipment and more. Heart rate monitors help trainers keep tabs on clients' fitness intensity.

"We ran a lot of outside classes, a lot during the summer, which was fairly easy. We've done Zoom classes, and Orangetheory corporate just came out with an online platform....where people can work out from their home or for people who don't feel comfortable coming into the studio. Once we get open, we'll still continue to do that," Brown told the Source. "It would probably take us a good 45 minutes as a staff to get everything out and set up, and then also another 45 to break it all down and bring it all back in the studio," Brown said. Nowadays, the studio has also begun allowing clients to take equipment home.

While the online option allows clients to get feedback from coaches, a lot is still lost, said Brown and the studio's manager, Jacqueline McGrew.

“Another big challenge for us is just, a lot of gyms just went ahead and opened up anyway and are operating as normal. Even some gyms in town were going as far as not making people wear masks in the studio. We’ve been losing a lot of members because of that.” —Stephanie Brown tweet this

"We've always had such a strong community, and the community side, I think, is what keeps people coming back," McGrew said. Brown and McGrew said they're considering getting a tent to set up in their parking lot to continue doing workouts, but another adaptation is offering a "run club" three days a week. Open to anyone—even those who are not clients—the trainers head out to the trails and sidewalks near the Old Mill for a one-hour workout that's part running, part strength training.

Throughout this past year, both women talked about the creativity and adaptability needed to get through this time and maintain their own personal fitness goals. At the same time, experiencing this disruption has allowed them to get more rest and check in with their own fitness goals in a way they didn't when they were in the day-to-day grind of running the studio, McGrew said.

Being able to check in personally with clients via telephone to help them keep on track has been another positive adaptation to the current situation, Brown said—but for some clients, those one-on-one phone calls and other adaptations have not made them stick around.

"Another big challenge for us is just, a lot of gyms just went ahead and opened up anyway and are operating as normal. Even some gyms in town were going as far as not making people wear masks in the studio. We've been losing a lot of members because of that," Brown said. "We live by another set of rules, too, beyond what the State of Oregon has. We're a locally owned franchisee but we live under the umbrella of Orangetheory corporate as well, and having to follow their rules. It's hard to compete with people that aren't following the rules."

Brown said the studio's corporate offices add in other rules, too, including strict cleaning protocols and a requirement to keep a supply of cleaning supplies—such as sanitizing wipes and hand sanitizer on hand. 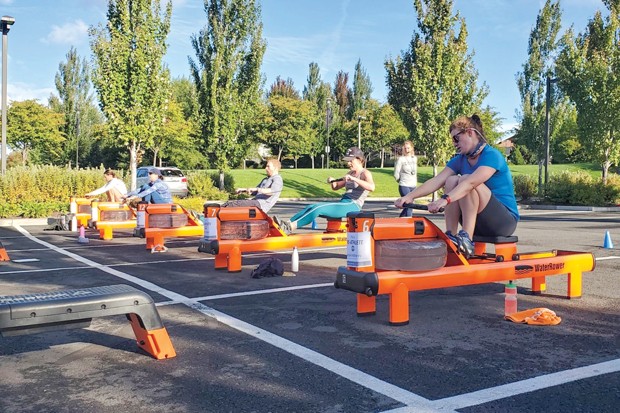 On Jan. 16, a group of protesters holding signs that included "We Will Not Comply!" and "Open Our Businesses!" gathered in Prineville, in front of Norm's Xtreme Fitness Center, a gym that offers "a complete range of fitness opportunities including elliptical trainers, free weights, recumbent bicycles, resistance circuit, rowing machine, sauna, senior resistance classes, stair steppers, stationary bicycles, and treadmills," according to the business' website.


Those gathered were there to advocate for the reopening of businesses, including gyms, entertainment venues and restaurants, which have been ordered to remain closed or to conduct business outdoors.

"It's not fair for one business to be open and another to be closed," gym owner Norman Smith told KTVZ. Under the current risk framework, counties including Deschutes, Jefferson and Prineville's Crook County are ordered to keep gyms closed until COVID case numbers and test positivity rates go down. According to correspondence on its Facebook page, Norm's continued to be open as of two weeks ago.