For Local Student Athletes, a Slow Start and Shorter Seasons

Despite having the first six weeks of school online, sports are starting to make the first steps toward in-person play

On Aug. 11, the PAC 12, following the direction of the Big 10 conference, canceled all its collegiate sporting events until the next calendar year. The cost? Between $100 million and $7 million—for each university.

For Bend's local high schools, however, there's still hope for an upcoming year of sports. On Aug. 5, just three days prior to the college cancellations, the Oregon School Activities Association, lead by Executive Director Peter Weber, laid out a detailed plan to allow for all Oregon high school sports to continue throughout the 2020-2021 year. 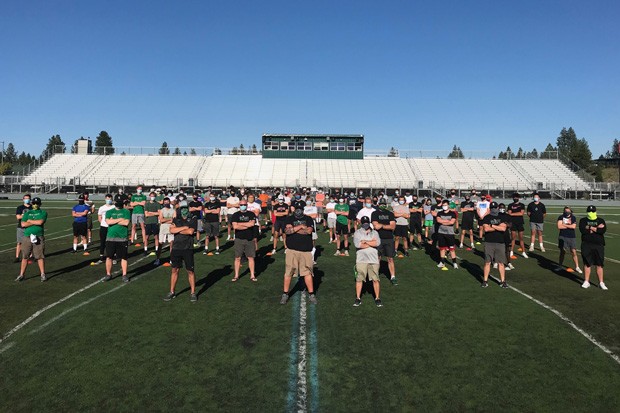 "Our focus is student engagement," Weber said. "We have to be focused on getting students actively engaged with their coaches, actively engaged with each other. This alone will have a tremendous impact on their physical, emotional and mental wellbeing. That is critical and it has to remain our primary focus this year."

With at least the first six weeks of classes at Bend-La Pine schools scheduled to take place online, the search for social engagement, and meaningful student experiences, is becoming as valuable as gold.

The OSAA plan includes strict regulations for sanitation and mask regulations, along with a calendar that includes four seasons of sports, instead of the traditional three. The first season, which began Aug. 31 and will end Dec. 27, is a season of practice time for all sports. Although most sports have been practicing already, within small 10 to 20-person workout pods, the start of Season One encourages the potential for scrimmages within non-contact sports. Out-of-season coaching regulations have been lifted, allowing for every sport to begin practicing.

"The OSAA's new calendar provides for three distinct seasons from late December to late June with limited overlap between seasons," OSAA described in an Aug. 5 press release. "Traditional Winter activities will take place in January and February (Season 2), followed by Fall activities in March and April (Season 3), with Spring activities occurring in May and June (Season 4). Each season will feature an equitable 7-week regular season, with adjusted contest limitations, followed by an OSAA Culminating Week."

Other extracurricular activities fall under those guidelines, too. Performing arts groups are following Season One protocols and began practice Aug. 31. For band, theater and dance, the OSAA recommends smaller pods, or groups. Practicing in person is OK, as long as students can maintain 6 feet of social distancing. Performances may be streamed live.

Things that lend themselves more easily to online interaction will stay online: speech and debate, for example, will take place via digital platforms, making it the only OSAA sport to go completely virtual this school year.

“With sports being taken away, you’re missing a part of yourself. Last year there was no motivation; I was down. But now, even being back in the weight room, there’s something to look forward to.”— Jake Hendricks tweet this

While plenty of activities can abide 6-feet distancing guidelines, a few sports, such as football, are steeped in a tradition of "full contact."

"We all had an idea that there wasn't going to be a traditional season this year," said Summit High School Football Coach Corben Hyatt. "My kids got really good at video games during the spring. Did nothing else. The first three weeks of us getting back together, we did not touch weights and just slowly progressed."

Because football is a full-contact sport, there are stricter regulations and rules for practicing. Right now, the team is in the weight room, meeting within smaller pods. Masks are required at all times, and 6-foot social distancing is in place.

One of the athletes inside the weight room is Jake Hendricks, a senior who plays middle linebacker and tight end for Summit.

"When we were first locked in last year to a fully digital world, when it was only school, I kept thinking, 'Is this it? This is awful.' With sports being taken away, you're missing a part of yourself. Last year there was no motivation; I was down. But now, even being back in the weight room, there's something to look forward to."

Students described the attitude toward the season as similar to being stuck in bumper-to-bumper traffic: once you get stopped, you don't care where you're going, or how fast you're going; you're just happy your wheels are moving once again.

"Watching the kids' demeanors change as soon as we started getting back together, has been great," said Hyatt. "They're seeing coaches, they're seeing each other. It is a critical piece in the well-being of our kids. There is fear that our kids are struggling, so were just happy to be back out there, playing a few games."

Going forward into the unknown

Will COVID-19 continue to keep schools shut down, beyond the first part of the school year? Will there be a resurgence of the virus that closes schools again, even if they reopen? They're huge questions, but for now, local athletes are looking ahead to their seasons—whatever they may be.

With OSAA not allowing state finals due to the travel and COVID regulations, the culminating week is meant to be ambiguous, OSAA will leave it up to the local districts to decide how to end each season.

Season two, beginning Dec. 28 and ending March 7, is the start of the winter sports season, including swimming, wrestling, and basketball. Season three, starting Feb. 22 and ending May 2, includes the fall season sports: football, soccer, volleyball and cross country. The final season will include track and field, baseball, softball, tennis, and golf, and will take place from April 19 to May 26... that is, if everything goes according to the current plan.