For Love and Dogs

"Isle of Dogs" is a charmer 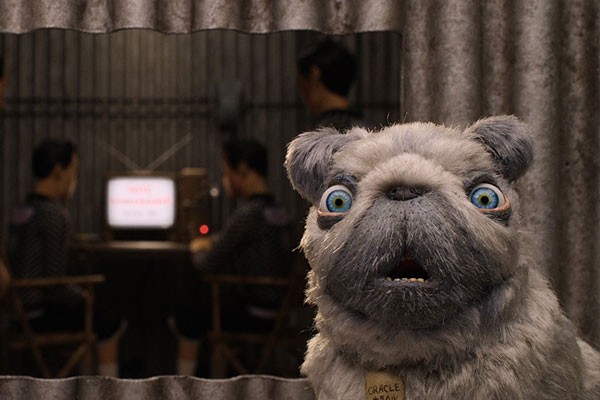 You either like Wes Anderson or you don't. His critics use words like "twee," "smug" and "calculated" to describe his very distinct visual style; filled to bursting with formal compositions and meticulously detailed frames...and they're not really wrong. His films are like dioramas where the audience is invited to sit outside and marvel, without necessarily receiving an invitation to stay.

Where I think most critics misinterpret his work is when they accuse his visually sumptuous work of being hollow or lacking an emotional core. Anderson's heart is always fully on display as he allows it to either be broken or understood. All of his films celebrate the outsider, but they explore those dynamics in ways that undermine the simple narrative of the underdog.

"Rushmore" broke down two outcasts from different generations as they misunderstand the difference between love and obsession. "The Life Aquatic" saw the packed days of an adventurer slowing down as age and family re-shaped his calloused heart. "The Darjeeling Limited" told the stories of three brothers seeing each other as people for the first time, in a land as alien to them as the moon. As meticulous and exacting as the design is, Anderson's films are all emotion, with the gorgeous production in service to his characters—all only in search of love.

"Isle of Dogs" is no different. The film sees Anderson stepping back into stop-motion animation after the flawless 2009 masterpiece, "The Fantastic Mr. Fox." The painstaking effort required in stop-motion animation suits Anderson perfectly, as the effort of the medium is regarded in the elegance of his imagery and storytelling.

"Isle of Dogs" takes place in Japan sometime in the future. A dog flu has spread through the entire canine population of Megasaki City. The mayor (a cat lover) ships all the dogs to Trash Island where they will remain forever. The mayor's ward, Atari, steals a plane and flies to the island to search for his dog, Spots, and possibly rescue all the dogs from a fate they don't deserve.

A large portion of the film follows Atari as he travels across the rotten landscape with the help of five dogs who've decided to help the boy. The wild dog in the bunch, Chief (soulfully voiced by Bryan Cranston), doesn't want anything to do with a master, but he's outvoted. The beautiful beating heart of the film is in watching Atari and Chief slowly grow to love each other while surrounded by nothing but ugliness and desperation.

"Isle of Dogs" didn't resonate as strongly with me as most of Anderson's work, but deciding how to feel about one of his movies on the first viewing, and to try to write about the myriad of emotions his work always pulls out of me has always been fruitless. Every film of his has taken on new meaning as I get older. When I was a teenager, "Rushmore" spoke right to me, but in my 30's, "The Darjeeling Limited" wrecks me every time.

If you don't like Anderson's style, "Isle of Dogs" might change your mind. This story of a kid and his dog transcends art design and droll comedy and becomes something much more primal and personal. The details are different, but we've all been there, sharing unconditional love with our best friend.