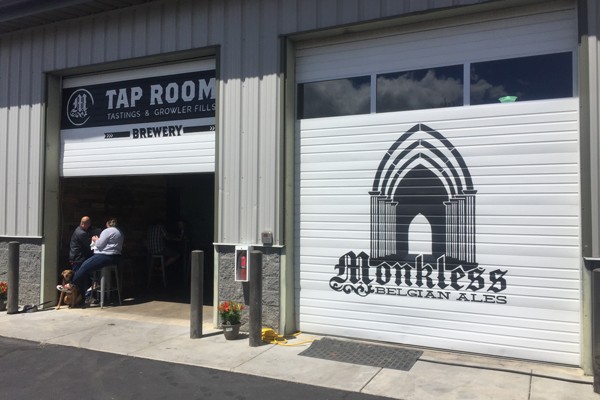 It wasn't terribly long ago that residents of Bend's northeastern quadrant didn't have much in the way of local beer. Folks nearby downtown or in the Old Mill are spoiled for choice, with 10 or so craft brewers and many more fine pubs within walking distance. Around the northeast, though, Bridge 99 Brewery and the neighboring Wubba's BBQ Shack was about all there was without having to tool down the Bend Parkway. No longer.

Bridge 99 is still kicking it royally, of course, slinging out Wizard Falls IPA and a litany of other classics on Saturdays and weekday afternoons. These days, though, they've been joined in the neighborhood by Monkless Belgian Ales, which opened up their new and quite fancy-looking taproom just off NE Empire this past week. They've been open for a while now, but previously only offered brews in a tiny space near the brewing equipment; the new taproom next door is a major upgrade that, among other things, allows them to provide Belgian beer in proper Belgian-style snifter glasses.

Monkless, run by the husband-and-wife team of Todd and Robin Clement, moved into these digs last year, a fairly large space that once housed 10 Barrel Brewing's production facility back when it was about a tenth its current size. (10 Barrel founders Chris and Jeremy Cox still own the building; they're leasing it to the Clements.) They've coincidentally installed a new 10-barrel brewing system inside, a big step up from the 1-barrel operation Todd started with in his basement during Monkless' early days. The setup includes some equipment originally owned by the now-defunct Old Mill Brew Wërks.

As the only brewery in the region specifically focused on Belgian-style ales, Monkless has already made a splash across the city. Heady concoctions like the powerful Pour Pour Pitiful Me quad and light, summer-friendly Shepplekofeggan witbier have been a regular at places like Zydeco and White Water Taphouse for a while; a tap takeover event at Eugene's famous Bier Stein bottle shop and restaurant is slated for this summer.

It'll no doubt be a busy summer for them, as their taproom launch coincides with Uber's launch in Central Oregon, making it more convenient for Bendites to take a quick look-see without having to risk a car trip back. And they'll be coming to the area in droves, thanks in no small part to 10 Barrel launching its own taproom next to its own production facility, just a couple blocks from Monkless on NE 18th Street.

As the throngs who attended 10 barrel's birthday bash and concert last week can attest, the AB-InBev money was put to rather epic use. 10 Barrel has two buildings in the northeast, one for the brew system and the other devoted to the bottling/packaging line, office space, and the new taproom. People who have been to 10B's Portland location will find the pub space similar—it'll offer an industrial-type atmosphere, fresh pizza and other casual food, and twenty taps of the latest. The official opening is May 25; check their Facebook for details on the "Fancy Beer Series" tasting party they'll host during Central Oregon Beer Week.