Walking into Second Chance Bird Rescue was similar to walking into an insane asylum – maniacal screams echoed off the walls, birds laughed hysterically at jokes that hadn't been told, and a strange rendition of "Happy Birthday" was being softly sung, over and over.

Donna Costley, the woman behind the operation, was clearly accustomed to the commotion. After walking through the dense barrage of cages and introducing each individual bird by name and temperament, Costley explained that—unlike cats and dogs—birds rarely get the attention they deserve. In fact, they tend to get a pretty bad rap.

"Birds are difficult," she said. "They're like toddlers. They've got the minds of two or three-year-olds."

When people buy birds, they tend to do so impulsively. The novelty of an English-speaking pet is enticing, and, to the inexperienced, birds may seem like relatively low-maintenance animals. The opposite is true. Caring for a bird is similar to caring for a small child; one that screams and speaks and requires an unexpected amount of attention—one that lives to be 100 and never really ages. The vast majority of birds Costley has taken in were horribly abused by their previous owners, some for decades.

"People get birds and then don't know what to do with them... they end up throwing them away or locking them up." Additionally, many birds outlive their owners. "People need to do their research," Costley passionately shares. "Be aware that birds tend to outlive humans. Put them in your will... you've got to prepare."

Barron was wrapped in duct tape for 20 years and tossed around like a football. Porter, a beautiful Greenwing Macaw, was kept in a small home with 370 other birds, held hostage for years by a bird hoarder in Portland. Blue, over 60 years old, was rescued from a crack house. Rehabilitation can take years, seeing as birds are highly intelligent, emotionally driven and prone to holding grudges. While many of the birds have warmed up to Costley, some are hostile—even violent. Just like all other pets, they're products of their environments.

Costley initially turned to birds after undergoing her own trauma, having lost her son, his wife, and their three children in a horrific car crash back in 2012. Unable to handle the grief, she retired from her Veterans Administration job in 2014 and moved to California with her husband. She opened her home and her heart up to several rescues, and in a matter of months she had taken in 16 birds.

She currently oversees 94 winged residents and space is getting tight. "We've applied for grants twice, and we haven't heard back. It's hard to find help for birds," Costley shared. Ideally, she would use the $500,000 in grant funds to build out a bigger sanctuary; one complete with windows and outdoor cages, so that the birds could come and go as they pleased. She also needs more funding for food, which usually totals in at around $1,200 a month. "I cook the birds a nice breakfast every Sunday morning," Costley said with a warm smile. "I used to cook them omelets back when I had 16, but our chickens don't produce enough eggs!" Instead, she whips them up a special combination of noodles, beans, cashews, almonds and bananas.

Despite the lack of knowledge surrounding our feathered friends (which can be blamed for the majority of their mistreatment), they are loveable, brilliant creatures. Unfortunately, government funding isn't the only resource that has been difficult for Second Chance to obtain. The refuge has had an extremely hard time getting people to volunteer.

"Some people will come in for a day, and then we'll never see them again." Admittedly, you must be rather resilient if you choose to volunteer—not because the birds are difficult to work with, but because their unique stories are so intensely heartbreaking. Like every other living creature, they simply crave love. A total of 25 birds are currently up for adoption. 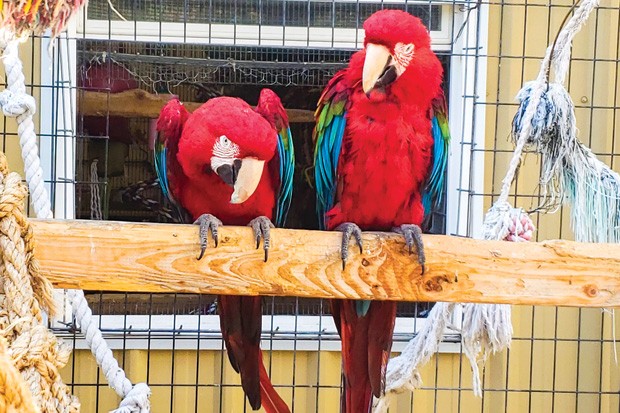 Volunteering was a truly rewarding experience; I immediately felt like family. Everyone involved is sincere, selfless and deeply compassionate. Not only did I enjoy getting to know Costley and her team, but I got to know the birds—and their personalities. I learned just how smart they are (for example, their cages must be padlocked, because they can easily memorize number codes and let themselves out). Some of them swear like sailors, and one bird – Bobo – mutters, "Oh my God..." to himself every time he drops something. Polly got to enjoy some Kentucky Fried Chicken as she oversaw the cannabidiol harvest (Costley's son runs a CBD farm on the same property).

Seeing as Bend is one of the most dog-friendly towns in the U.S., it can be easy to overlook the bird population. Frankly, I never would've been compelled to seek out a bird rescue. Yet, having visited twice now, I can safely say (and this opinion has been backed by other volunteers), there is something about Second Chance that sticks with you.