For the Love of Cats | Local News | Bend | The Source Weekly - Bend, Oregon

For the Love of Cats

It takes a big love for cats for someone to wake at 4:30am, do a loop across Central Oregon from Sisters to Madras, then to Burns and back by midnight—with a carload of feral animals.

Caring for pets in Central Oregon got a little more streamlined when in November, the Bend Spay and Neuter Project became a program of the Humane Society of Central Oregon. That offered easier access—under one organization—to a wide array of services that provide compassionate and humane care for animals, said Sabrina Slusser, executive director of the HSCO. 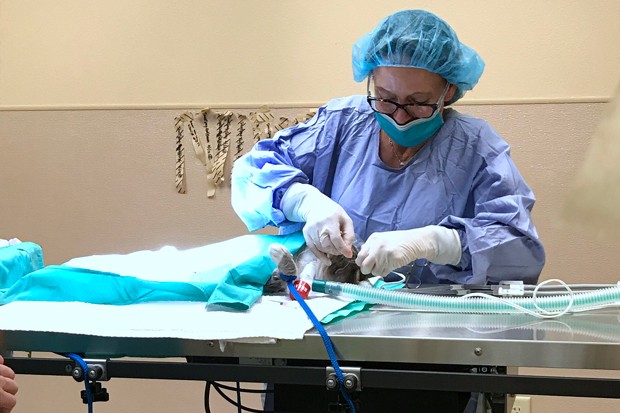 Elaine Gilbert, a retired nurse and BSNP volunteer since 2005, said she first got involved with helping control the community cat population using the Trap-Neuter-Return method when she was living in the San Francisco Bay area. Trap-Neuter-Return is the only effective and humane way to stabilize feral cat populations, according to Alley Cat Allies, founded in 1990 to educate policymakers and others on the humane care of cats.

Gilbert previously worked in Oakland, California, and would drive by a warehouse district on her way to work, where she'd see cats running around. Gilbert said one day she inquired about the cats because she'd done the TNR on her own farm.

"I stopped and talked to one of the workers and he said, 'Oh, these are wild cats—feral cats—and we feed them,'" Gilbert said. "And I said, well does anybody fix them. No? So what happens to the kittens?"

Gilbert said they just kept the kittens and had about 40 to 60 cats on their property at the time. Gilbert called local veterinarians on the recommendation of an attorney friend to see if they offered discounted rates for neutering feral animals. By establishing a relationship with the warehouse workers, they offered to pay $25 per cat for neutering services. Gilbert did the trapping.

"I bought myself two traps and on my way to work, I'd set the traps—there were no cell phones or anything back then—and then on my way home, I would check the traps and if there were cats in them, I'd take them home and then the next day I would take them into the clinic," Gilbert said.

Today, Gilbert said she and one other volunteer do most of the trapping in Central Oregon—and they do it all over, from Warm Springs to Burns to Fossil and Christmas Valley.

Gilbert said lately, Madras and La Pine have seen the larger populations of community cats—and even Sunriver has started to get a population over the last few years.

According to the BSNP—which provides spay and neuter services for dogs and the TNR program for cats, among other services—the organization helps get on average 3,000 to 4,000 cats and dogs neutered yearly. In 2018, the Central Oregon Cat Alliance clinic—founded in 2012 as a collaboration to do a large-scale TNR project—performed 420 sterilizations on feral cats, and the HSCO altered 109 cats brought to the facility.

The cost of sterilizing a cat is $50 to $60, according to BSNP. Community cats—also called feral cats—cost $10—a price that includes rabies vaccination and an ear tip, so that people know which feral cats have been neutered. The HSCO applied for a grant from Deschutes County for $8,600 for 43 "mother and kitten specials" where the mother cat and all of her kittens are neutered for $80. For people on any form of government assistance, neutering is $20 and spaying is $25.

Lynne Ouchida, outreach manager for HSCO, said the cost of the COCA cat clinics are covered by HSCO fundraising, donations and a $20,000 grant from the Petco Foundation.

Research from the American Veterinary Medical Association shows the Trap-Neuter-Return program can significantly lower the number of feral cats in an area. According to a 2003 study by the AVMA, areas where cats were trapped, neutered and then returned or adopted saw a population decrease of 66 percent over an 11-year period.

Gilbert said one of the old methods was to trap feral cats and then have them euthanized upon intake at shelters. Sometimes people would trap the cats and relocate them—but both methods backfired, other cats would just move in and take their place. Then landowners faced a new population of unaltered animals and were back to square one.

"If there's a food source or a water source—something that's there for the cats—if you remove the colony, the cats will come back," Gilbert said.

According to People for the Ethical Treatment of Animals, one female cat and her offspring can produce 67,000 cats in seven years.

"Help is available," Gilbert said. "If you have feral cats, that number can quickly explode—people start with two cats and within two years they'll call and say I've got 50 cats."