For Those About to Rock | Local News | Bend | The Source Weekly - Bend, Oregon

For Those About to Rock

Music at the Century Center is back. For now. 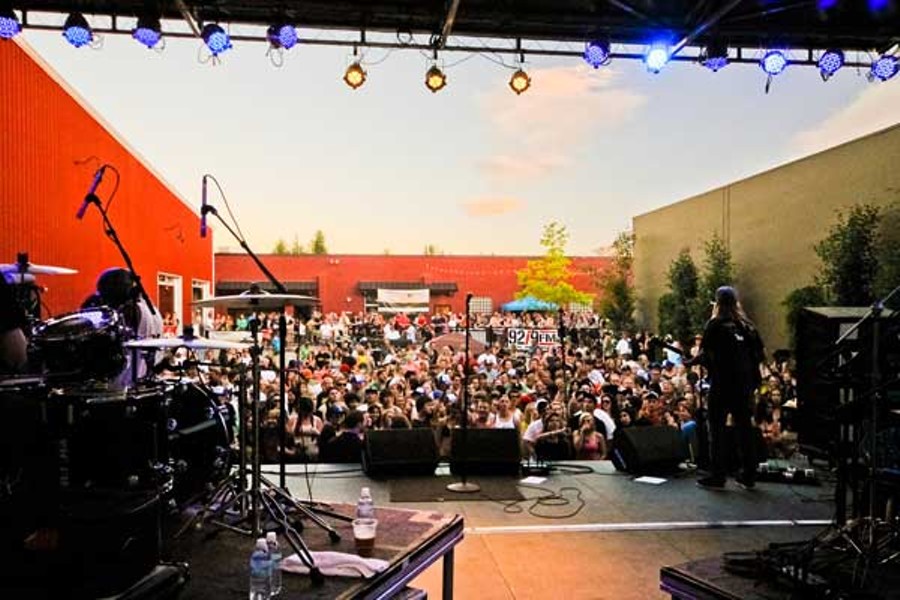 It had been a difficult summer for Hill, the owner of the Century Center. The gray-haired, goatee-sporting businessman had listened to complaints from residential neighbors and, in August, had a run-in with Nosler, a neighboring bullet manufacturer. Nosler appealed Hill's Century Center development plans and hoped to bring an end to the use of a common easement. Additionally, a noise ordinance, newly adopted by the Bend City Council, had Hill questioning what allowances would remain for outdoor concerts. Finally, he said, no more.

"I'm just not willing to have more outdoor events," a frustrated Hill told the Source in August. In December, Hill reaffirmed his position when he stated a New Year's show, featuring the raucous Larry and His Flask, would be the Century Center's last concert.

But, in an exclusive announcement to the Source this week, Hill asserted that he is bringing back the Century Center as one of the premier mid-sized music venues in the region. He has joined with two business partners and already has lined up a rocking schedule. More generally, this about-face and decision to re-mount a concert series speaks volumes about the new noise ordinance, and its apparent efficacy.

In an email, Hill's business partner Bret Grier, a local music promoter, confirmed the out-of-the-blue news. "Our main goal is to produce top-notch, nationally known artists," wrote Grier. Grier has been booking shows in Oregon for 15 years and is joined by Bend Radio Group owner Jim Gross to bring about the newest incarnation of the Century Center. With a splash of bravado, Grier added, "[We] provide our patrons with a party vibe attached to them, setting us apart from all the other local events."

In fact, the partners already have booked Seattle alt-rockers The Presidents of the United States of America for a show less than two months away, June 27. The '90s band, famous for the pop track "Peaches," is playing as part of the Subaru Outside Games, the second annual six-day celebration of Central Oregon.

There isn't necessarily anything new about the venue; it is just reopening, providing another midsize outdoor concert venue. Located next to GoodLife Brewing and nestled within the Century Center complex, the space has hosted plenty familiar and fun concerts over the past few years, from Bend Roots to Volcanic Funk acts.

The promoters also claimed that they are toying with the idea of hosting additional shows, either on the vacant concrete pad visible from Century Drive or inside the Century Courtyard. Two summers ago, Bend Radio Group's popular alternative station 92.9 hosted Everclear in the courtyard, and last summer brought in The Dirty Heads. According to Gross, both shows proved successful. The Bend Radio Group owner said Everclear brought in 1,110 fans while the lesser-known California reggae band The Dirty Heads attracted around 600 people, many 20 to 30-something surf-rock die-hards.

That younger demographic is exactly who they are after—the 21-35 set who grew up with Sublime and Pearl Jam, and still follow those bands and their various incarnations. Gross noted that while '70s classic rock groups like the Steve Miller Band are great fun (Miller played Les Schwab Amphitheater last summer and returns this summer), those shows "target the baby boomer crowd."

"It's the 21-to-34-year-old market that's underserved," noted Gross. "We want to try to identify and grab those bands that are breaking. We're not really even competing [with other promoters], just filling an aspect."

Among other acts announced for the Century Courtyard summer lineup is Primus frontman Les Claypool, scheduled for August 24. Claypool, the world's funkiest (and arguably best) rock bassist, is touring with Duo de Twang, an acoustic setup that includes guitarist Mark "Mirv" Haggard. Together the pair play a mix of originals, Primus favorites and classic country tunes.

To round out the summer lineup, Grier said his group is looking to land a few more outside acts at the courtyard.

But what about the noise?

What is particularly compelling about the resurrection of Century's outdoor venue is that it comes immediately after Hill had declared he was shutting the doors on events at the Century Center. It is, said more directly, a testimony to the current noise ordinance's strength and effectiveness, which was put into action in July.

"I support the proposed changes to the ordinance," Hill wrote in an email, "and I think the current council is doing a good job of refining it and striking a reasonable balance between the competing interests in the community."

Gross, Grier and Hill have done their due diligence to comply with the noise ordinance. In January, the group met with City of Bend Business Advocate Carolyn Eagan and laid out their plan. They explained their shows wouldn't go past 10 pm and they did not plan to exceed the 85-decibel threshold allowed on premises before 10 pm. Eagan advised them that they need not apply for a special noise permit. They did anyway in order to obtain the addresses of neighbors, and as a goodwill gesture have alerted anyone living within 500 feet of the Century Center Courtyard. Gross added he lives in that neighborhood and, as much as he likes live music, he likes respectful neighbors even more.

"We all like music," offered Petrich, "but we also like to sleep at night." He said he's pleased with how the new noise ordinance has panned out and, as long as the rules are followed, has no problems with the new Century Center Courtyard concerts.

"If they fall within the noise ordinance, then I'm quite comfortable with it," Petrich said.

As the ordinance stands, venues in residential areas, like the Century Center, are allowed 85 decibels on site, up to 10 pm. That's 65 dBs from the point of complaint, such as a neighbor's front porch. And that allowance drops to 60 dBs after 10 pm.

"If we understand the ordinance correctly," Gross explained, "then we should be fine." He added, "but if something comes through where we'd need a variance, then we'll do that. And that's the proper way." Picking up trash and directing traffic are two of the many smaller tasks that, according to Gross, should alleviate any strain on the westside community.

"We're happy to operate within the system," he confirmed.

We're with those guys

Gross, Grier and Hill seem to have the support of Bend's music community, too. Mark Ransom, the longtime local music man who heads up The Mostest, a jam band, said bring it on.

"More music in Bend is great," Ransom enthused, happy to hear that previously noise-shy Bend promoters and venue owners now feel comfortable hosting shows again. "Yes, bring it. That's great. We need folks in the community who are pushing for the civil liberties of those who want to rock."

But Ransom isn't convinced Bend's new noise ordinance is as clear and simple as it could be. The decibel-reading thing? According to Ransom, that's an unnecessary addendum. The touring musician points to towns like Telluride, Colo., as a blueprint for what Bend could do. In Telluride, a 2,300-person mountain town with a badass live music scene, 10 pm is the primary governor. Bands, promoters and music venues can operate freely, Ransom said, as long as they turn off the tunes by 10 pm. Such a simple law, Ransom said, makes for near-universal compliance, as well as acceptance from the neighbors. If basic rules are followed, then Bend's music scene will continue to grow, added Ransom.

"There was a point in Austin's history where there were some people who didn't like all the music," Ransom pointed out, referring to the Texas city that has built a reputation—and an economy—on live music. "Those people are completely gone," he concluded.