River's Edge Golf Course is being sold to develop new housing. What does that tell us about Bend's land supply?

Golfing is expensive, but not nearly as expensive as a house in Bend. Good news is, there's about to be more of them. Wayne Purcell, whose family has been instrumental in the economic development of Bend as a tourist destination for decades, announced his intention to retire and sell River's Edge Golf Course in the process. Rather than selling to another golf course operator, Purcell opted to sell to Pahlisch Homes, whom he's partnered with to build many of the houses sprinkled around the course now.

"Across the nation golf has declined. With high costs to maintain and low profitability margins, courses across the country are being shuttered and abandoned, or being sold off to become high-density housing developments," a press release from Pahlisch Homes said. "Purcell chose to sell to Pahlisch to prevent these outcomes for River's Edge and the surrounding lands." 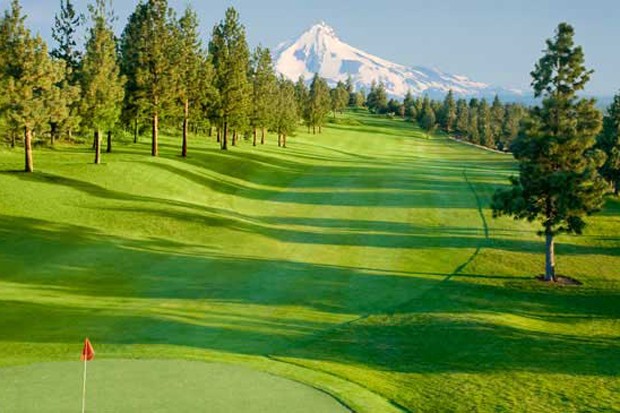 Pahlisch said its plan for the course was to keep 50% of River's Edge as open space, with 50% of the potential 400 homes planned as "missing middle" homes, which are usually more affordable multi-family units. The company hasn't committed to a particular mix of density yet, but the development will feature homes besides single-family dwellings.

"Apartment buildings will not be in a final development plan. Paired townhomes, multiplexes and cottage homes are just some of the product types that the new Uplands community will offer. We know more stakeholder involvement is needed to ensure a mix of housing types are integrated in a highest and best-use way," Pahlisch wrote in an email to the Source.

Redeveloping a golf course isn't unheard of, but the announcement shocked golfers and people who live nearby.

"There's just not a lot of available land, which is why someone would consider buying a golf course and converting the golf course to housing," Damon Runberg, regional economist serving the East Cascades for the Oregon Employment Department, said. "You've got a dirt issue, just a real land issue, when that's happening."

In March only 14 homes sold for less than $500,000 in Bend, making home ownership nearly unattainable for the median household income of $65,662 tweet this

The conversion of the course is indicative of Bend's decreasing supply of buildable land. Over 83% of Bend's land is already developed. Vacant land takes up 16.2% of the city overall, 58% of which has no established use and an improvement value under $20,000. With so little land available for new, or "greenfield," developments, developers will have to get creative to meet housing demand.

"Housing can take place in either a redevelopment situation, or a greenfield situation. I think it's fair to say that we are... city of Bend is running out of opportunities for greenfield development," Brian Rankin, a planning manager with the City of Bend, said.

Runberg says the housing crisis is a result of long-term local issues, including years of underbuilding and investing too heavily in single-family dwellings, but also more current universal trends like millennials buying their first homes, historically low interest rates and people choosing not to move locally during the COVID-19 pandemic.

"The demand has been high because we are one of the fastest-growing communities, as a percentage of population, in the last decade in the nation," Runberg said. "Then also, if you start going down into certain types of housing, you see an even larger disparity as where we don't have enough supply for the demand that exists."

Options for lower and middle income housing are nearly non-existent for those wishing to own a home. In March, just 14 homes sold for less than $500,000 in Bend, making home ownership nearly unattainable for people earning the city's median household income—$65,662, according to the latest figures from the U.S. Census Bureau. With costs soaring, the need for townhomes, apartments and other alternative types of housing is necessary to accommodate the average Bendite.

"Some very professional, what we consider high-paying occupations can't even afford housing, at least on a single income," Rundberg said. "The share of our housing stock and single-family residence has been far skewed towards single family compared to your average metropolitan area, and that's definitely been an area that we need to sort of alleviate, we need to create more of all types of housing."

City leaders are aware of the need to build and have issued more residential building permits in 2020 than they have since the Great Recession.

"The fix is, hopefully, geographic mobility picks up as we continue to see more vaccinations, and so that churn of the existing home market will pick back up to more normal rates, and we continue to see this trend of building permits and more new houses being built," Runberg said. "Those two together should really alleviate some of the supply crisis, it won't make it go away, it just will make it not hurt as bad."

The issues facing housing costs in Bend aren't unique. During COVID-19 the cost of homes climbed as interest rates plummeted across the country, while new home construction remained relatively unchanged.

Related Buying A House in a Pandemic: Low interest rates, less competition between buyers and a looming metropolitan exodus makes now a good time to buy a house, realtors say