Some people call this time "pumpkin spice season," or maybe "smoke season," but those who live for that cold, frosty beverage at the end of the day know the end of summer instead as "fresh hop season." Harvest time is a glorious season for brewers and hop farmers alike, as they both get to revel in the making of a special seasonal beer featuring the freshest hops, right off the bine. (A "bine" is the term for the stem of a climbing plant, such as those on a hop plant.)

Back now for its 11th year, the Sisters Fresh Hop festival happens Sept. 24 at the Three Creeks Brewing tasting room. Co-hosted by Three Creeks and the Oregon Brewers Guild, Sisters Fresh Hop is the place to get all the goodness the season provides—including fresh-hop beers from 20 breweries from Bend, Redmond, Eugene, Hood River, Portland and Astoria.

Drinking a fresh-hop beer is like a flavor explosion: all the hop-forwardness of the classic IPA one will find in so many Northwest taprooms these days, but amplified. And for those nay-saying the difference in flavor, perhaps just knowing something about the coordination necessary to produce a fresh-hop beer will entice some to get a little more excited.

"In order for a beer to be considered 'fresh hopped,' the hops must be picked and then brewed within 24 hours," reads a description on the Sisters Fresh Hop website. "The only time fresh hop beer can be created is during harvest season in late summer, early fall. Think of it as an herb: Dried vs. fresh. You will still get the herbal notes from the dried herb, but when it's fresh, you can taste the difference!" 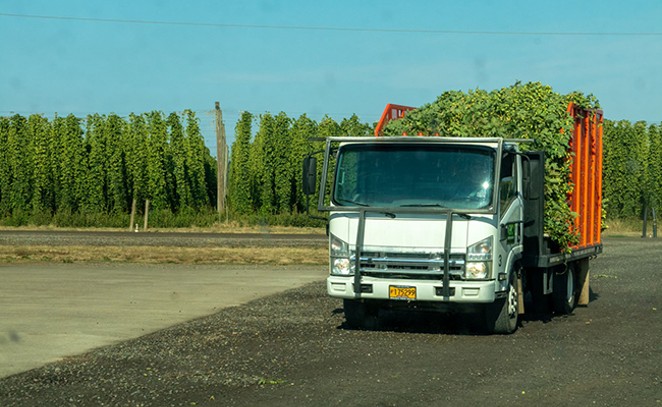 With a 24-hour turnaround time between harvesting hops to putting them in beer, the pressure is on. If brewers didn't love the uptick in "herbal notes" they get from fresh-hopping, they wouldn't bother, right?

During the one-day event, $25 gets attendees entry, a festival pint glass and five drink tickets when purchasing online. Another $5 gets one five more drink tickets for those buying ahead, and for those at the door, $25 still gets you entry, a pint and five tickets, but additional drink tickets are $2 for the 4-ounce pours day-of. The festival is a family friendly event, with live music from Oregon Fryer and special guest Tony Lompa, as well as food trucks to wash down all that fresh-hop goodness.