Fort Rock: a Place of Wonder and Music 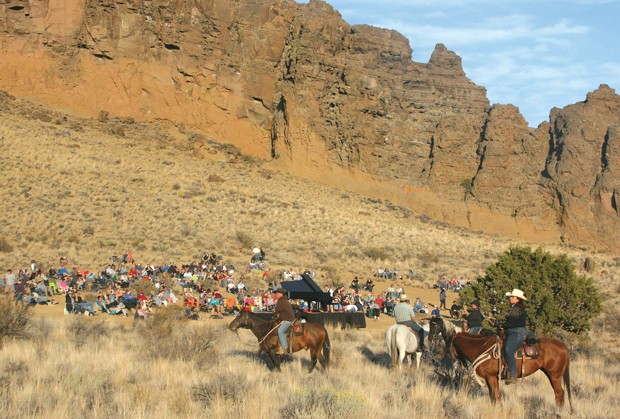 There's a story about an old cowpoke from Fort Rock who, having breathed his last, found himself at the gates of Heaven. Peter, the well-known keeper of the gates, saw the old buckaroo approaching, got out of his comfortable chair and asked, "Who are you, old-timer?"

"My name's Sam," the cowboy answered.

St. Peter shifted from one foot to the other, scratched his old, gray hair and then with hesitation in his voice said, "Well... you can come on in if you wanna, Sam...but this place ain't near as pretty as Fort Rock."

And that, dear reader is just one reason why I'm going to be buried there.

Fort Rock is a magnificent place to go birding—especially birds of prey. At just about any time of the year you can find both Golden and Bald eagles somewhere in the vicinity. It also provides important nesting habitat for Prairie falcons, Barn owls, American kestrels, Great horned owls, White-throated swifts, Meadow larks, Rock doves and other species.

Fort Rock is a tuff ring created by volcanic activity some say took place during the last ice age. (I don't agree with the age; I think it's a lot older.) The tuff ring is about 4,460 feet in diameter and stands about 200 feet high above the plain. "Tuff" is not an error in spelling for "tough." It's a geological term.

"Let us pray that everyone will find more moments like these, because, unless we can work together to save the planet, we will be unable to save ourselves." —Graig Miller tweet this

The name Fort Rock is derived from the tall, vertical, weather-worn, sides that resemble the palisades of a fort. It's said that William Sullivan, an early settler, named Fort Rock in 1873 while searching for lost cows. If you want to know more of the history of Fort Rock, read Reub Long and E. R. Jackman's book, "The Oregon Desert."

According to what Phil Brogan taught me in the '50s, tuff is an igneous rock formed by continuous violent volcanic eruptions. When the material is compacted and cemented into rock, it's called "tuff." In Fort Rock's case, each eruption gushed hot mud, ash and lava from the vent, causing the formation to get higher and higher, then sloping off to form a huge doughnut-like ring on the surface.

During the tail end of the last ice age, the wave-cut terraces on the south side of the ring were formed and mark former lake levels of this now dry lakebed, a spot that lizards, like the Side-blotched utas, love to hunt ants and beetles today. Southerly winds—still predominant—drove the waves relentlessly until they eroded the soft ash layers, breaching it, and creating a large opening.

It is managed today by Oregon State Parks, which gives guided tours to old Monkenmier Cave, aka Fort Rock Cave, 1/4 mile to the west of Fort Rock.

The area was also the recent site of a special concert. On Sept. 8, a very distinctive, talented young man, Hunter Noack, and his family hauled their trailer, loaded with his magnificent nine-foot Steinway, up the dusty trail from the parking area of Fort Rock and placed it on the level, amid the sagebrush and sandy volcanic bed.

To meet the acoustical challenges of performing in the wild, open air, music is transmitted to concert-goers via wireless headphones. No longer confined to seats, they can explore the landscape, wander through sagebrush and rabbitbrush, lie in sunny meadows and roam old growth forests while enjoying Noack's amazing talent.

The timing for the Fort Rock concert couldn't have been better. Most of the nesting birds, including falcons and owls, were finished and the young who were still hanging around their nest sites were free to enjoy the music, or fly off to another location and rest their ears.

As my wife, Sue and I settled into our camp chairs, soaking up the warmth from the setting afternoon sun and anticipating the music, we met two caver pals from Sisters. Kara and her sidekick, Brent McGregor, said, "Won't it be something to hear that beautiful music bounce off these old lava walls." It was, and I wondered what my old pal, Reub Long (who once owned part of the tuff ring), would have said.

You can bet he would have come with some great one-liners (for he was Oregon's Will Rogers), like the one I heard him pull when he came down from counting all his new horses at Butte Well.

A woman nearby came over and asked, "Mr. Long, how could you count all the horses coming through that dust, I could hardly see them?"

He looked at her in surprise, and with a big grin said, "Why, it was easy ma'am, I just counted all the legs and divided by four!"

And yes, there were at least four ranchers (wearing head phones) on horseback who joined the over 275 guests who came to hear Noack perform.

After the concert, Craig Miller and his wife, Marilyn, who came for birding and stayed for the concert, summed up the experience this way:

"The setting (Fort Rock) enhanced the music, and the music enhanced the setting. It is rare these days to see urban and rural folks sharing their enjoyment, but the event did just that. Grandparents, grandchildren, ranchers, environmentalists, politicians—and everyone in between—were united in camaraderie—briefly, spontaneously, unabashedly allowing our perceived barriers to break down as we filled our hearts and souls with the harmony of nature and music. That moment unequivocally proved that Earth's human inhabitants have more in common than not, that the 'divide' is more belief than truth.

"Let us pray that everyone will find more moments like these, because, unless we can work together to save the planet, we will be unable to save ourselves."