Free Will Astrology: Week of Nov 6

SCORPIO (Oct. 23-Nov. 21): In the early stages of Johnny Cash's development as a musician, his mother hired a coach to give him singing lessons. But after a few meetings, the teacher counseled him to quit. Johnny's style was so unique, the seasoned pro thought it better not to tamper with his natural sound. I hesitate to offer you comparable advice, Scorpio. I'm a big believer in the value of enhancing one's innate talents with training and education. On the other hand, my assessment of your destiny between now and October 2018 impels me to offer a suggestion: It may be useful for you to give some credence to the perspective of Johnny Cash's voice coach. Make sure you guard and revere your distinctiveness.

SAGITTARIUS (Nov. 22-Dec. 21): I used to nurture a grudge against Tony Pastorini. He was the high school math teacher who kicked me out of the extracurricular Calculus Club because my proofs were too "intuitive and unorthodox." The shock of his rejection drove me away from a subject I had been passionate about. Eventually, though, I came to realize what a good deed he had done. It would have been a mistake for me to keep specializing in math – I was destined to study literature and psychology and mythology – but it took Pastorini to correct my course. Now, Sagittarius, I invite you to make a similar shift of attitude. What debt of gratitude do you owe a person you have thought of as a source of frustration or obstruction?

CAPRICORN (Dec. 22-Jan. 19): In the lore of ancient Greek mythology, the god Prometheus stole fire from his fellow deities and sneakily gave it to us humans. Before our patron provided us with this natural treasure, we poor creatures had no access to it. As I gaze out at your possibilities in the coming months, Capricorn, I foresee you having Promethean inclinations. Your ability to bestow blessings and spread benevolence and do good deeds will be at a peak. Unlike Prometheus, however, I don't expect you'll get into trouble for your generosity. Just the opposite!

AQUARIUS (Jan. 20-Feb. 18): Here's a parable you may find useful. An armchair explorer is unexpectedly given a chance to embark on an adventure she has only read and dreamed about. But she hesitates on the brink of seizing her opportunity. She asks herself, "Do I really want to risk having ragged reality corrupt the beautiful fantasy I've built up in my mind's eye?" In the end she takes the gamble. She embarks on the adventure. And ragged reality does in fact partially corrupt her beautiful fantasy. But it also brings her unexpected lessons that partially enhance the beautiful fantasy.

PISCES (Feb. 19-March 20): "A game of chess is usually a fairy tale of 1001 blunders," said chess grandmaster Savielly Tartakower, a Pisces. "It is a struggle against one's own errors," he added. "The winner of the game is the player who makes the next-to-last mistake." I think this is excellent counsel during the current phase of your astrological cycle, Pisces. It's time to risk bold moves, because even if they're partly or wholly mistaken, they will ultimately put you in a good position to succeed in the long run. Here's a further point for your consideration. Remember the philosopher Rene Descartes' famous dictum, "Cogito ergo sum"? It's Latin for "I think, therefore I am." Tartakower countered this with, "Erro ergo sum," which is "I err, therefore I am." 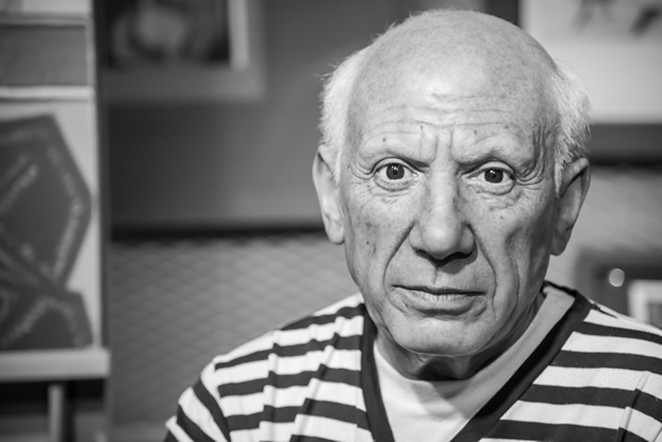 ARIES (March 21-April 19): America's Civil War ended in 1865. A veteran from that conflict later produced a daughter, Irene Triplett, who is still alive today and collecting his pension. In the coming months, I foresee you being able to take advantage of a comparable phenomenon, although it may be more metaphorical. Blessings from bygone times, perhaps even from the distant past, will be available to you. But you'll have to be alert and know where to look. So now might be a good time to learn more about your ancestors, ruminate exuberantly about your own history, study the lives of your dead heroes, and maybe even tune in to your previous incarnations.

TAURUS (April 20-May 20): "I wasn't in the market to buy a Day-Glo plastic fish from a street vendor," testified a witty guy named Jef on Facebook, "but that's exactly what I did. The seller said he found it in someone's trash. He wanted fifty cents for it, but I talked him up to a dollar. The best part is the expression on the fish's face. It's from Edvard Munch's “The Scream.”" I bring this testimony to your attention, Taurus, because I feel it's good role-modeling for you. In the coming days, I bet you won't know exactly what you're looking for until you find it. This prize may not be highly valued by anyone else but you. And it will amuse you and be of use to you in just the right ways.

GEMINI (May 21-June 20): Where are Chinese gooseberries grown? In New Zealand. What is a camel's hair brush made of? Squirrel fur. When England and France waged their Hundred Years' War, how long did it last? 116 years. When do Russians celebrate their October Revolution? In November. Trick answers like these are likely to be a recurring theme for you in the coming weeks, Gemini. That's why I advise you to NOT be a Master of the Obvious.

CANCER (June 21-July 22): In accordance with the astrological omens, I recommend you indulge in any or all of the following exercises. 1. Dedicate an entire day to performing acts of love. 2. Buy yourself flowers, sing yourself a song, and tell yourself a story about why you're so beautiful. 3. Explain your deeply-felt opinion with so much passion and logic that you change the mind of a person who had previously disagreed with you. 4. Make a pilgrimage to a sacred spot you want to be influenced by. 5. Buy a drink for everyone in a bar or cafe.

LEO (July 23-Aug. 22): "Dear Rob: I saw a photo of you recently, and I realized that you have a scar on your face. I hope you don't mind me telling you it resembles an ancient Mayan hieroglyph that means 'Builder of Bridges for Those Who Are Seeking Home.' Did you know this? If so, do you think it's an accurate title for what you do? - Renegade Leo Scholar." Dear Scholar: Thanks for your observation. I don't know if I fully deserve the title "Builder of Bridges for Those Who Are Seeking Home," but it does describe the role I'm hoping to play for Leos. The coming weeks will be an excellent time for your tribe to clarify and cultivate your notion of home.

VIRGO (Aug. 23-Sept. 22): Author Clarissa Pinkola Estés encourages us to purge any tendencies we might have to think of ourselves as hounded animals, angry, wounded victims, leaky vessels aching to be filled, or broken creatures yearning for rescue. It so happens that now is a perfect time for you to perform this purgation. You have maximum power to revise your self-image so that it resounds with more poise, self-sufficiency and sovereignty.

LIBRA (Sept. 23-Oct. 22): I used to scoff at people who play the lottery. The chance of winning big is almost nil. Why not invest one's hopes in more pragmatic schemes to generate money? But my opinion softened a bit when the planet Jupiter made a lucky transit to an aspect in my personal horoscope. It really did seem like my chances of winning the lottery were unusually high. I started dreaming about the educational amusements I'd pursue if I got a huge influx of cash. I opened my mind to expansive future possibilities that I had previously been closed to. So even though I didn't actually get a windfall during this favorable financial phase, I was glad I'd entertained the fantasy. In alignment with current astrological omens, Libra, here's the moral of the story for you: Meditate on what educational amusements you'd seek if you had more money.

Homework: Meditate on death not as the end of physical life, but as a metaphor for shedding what's outworn. In that light, what's the best death you've experienced?