Fresh Hop Beers Are Now Easy to Pick Up, Hard to Pin Down | The Source Weekly - Bend, Oregon

Fresh Hop Beers Are Now Easy to Pick Up, Hard to Pin Down

For hopheads, it's the most wonderful time for a beer

Mercurial. That may be the most defining aspect of fresh hop beers that are not one specific beer or flavor but are a shapeshifting target. When a beer features fresh (aka "wet") hops (as opposed to the kiln-dried, typically pelletized hops all breweries rely on year-round) it isn't defined by its brewery or style but by virtue of being completely agricultural. As such, as with all terroir-driven consumables, there's a breadth of changeability that can often lead fresh hop beers not to a brewer's desired destination but to Mother Earth's whimsical one. Their inherent beauty is that freshly-picked hops must reach a brewery's boil kettle within 24 hours, but ideally even sooner lest the volatile compounds within the hop flower degrade. 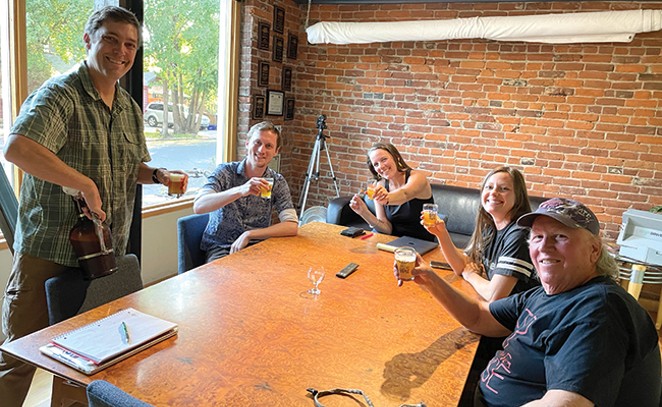 What this means for us in the Pacific Northwest, where virtually 99% of hops are grown, is that our breweries are able to produce them. Add to this that hops are only harvested in late summer. So these beers—typically IPAs, but any beer style where the brewer wants to showcase the pungent emeralds of the Willamette or Yakima Valleys—are exclusively a liquid delicacy available right here, right now.

Some of them put already cherished hop varietals on a pedestal such as Crux Fermentation Project's Crosby Strata Fresh Hop IPA, which pays homage to the Valley's Crosby Hop Farm. The hop is celebrated for its balance of sweeter fruit notes (berries and passion fruit) combined with danker, herbal (sage!) qualities.

Crux's beer was included in a small, informal, blind tasting conducted at the Source Weekly HQ and our thirsty judges, mercurially, offered up notes across the spectrum. Some deemed it creamy, others felt it was quite bitter. One was struck by the beer's "Juicy Fruit" flavor while another noted it tasted like "green matter."

Taste, of course, is subjective, but the fun factor in fresh hop beers is that different palates truly pick up varying qualities, all of which are to be expected in such offerings.

Perhaps the favorite beer sampled was Boss Rambler's Azacca Shaka Hazy IPA. Azacca is much newer to the scene at large, a varietal marked by bright mango and other tropical fruit notes with a more diminished citrus kick than many classic PNW hops. Though the beer also featured some Strata as well as Citra Lupomax (think hashish made from Citra hops), its 10 pounds of Goschie Farms fresh Azacca is the centerpiece and the beer's sweet, smooth flavor and mouthfeel were an across-the-board hit. The most on-target comment was "Limoncello."

Of course, some brewers are able to get their hands on experimental hops—ones that have not officially been patented or named and are only available for trial use to select breweries. Naturally, a brewery of Deschutes's size means it can get ahold of almost anything it desires and lucky for us it desired Experimental 1320. To this beer drinker's taste buds, it's reminiscent of another newer variety called BRU-1 in that it smacks of fresh pineapple. Each of the judges felt whisked away to a tropical island drinking Experimental 1320 Fresh Hop IPA, available at both the Deschutes brewpub and tasting room. It is complemented by a peppery kick perhaps owing to a more phenolic yeast strain and/or the sharpness derived from the wet hops which, understandably, can taste a bit like chewing on flower stems. In a good way.

Also formally under the Deschutes umbrella, Boneyard's Out on Bale (brewers love hop puns and this is a nod to bales of hops) is the one Imperial IPA in our roundup. Though it weighs in at 8.5% ABV, the freshie Simcoe hops give it a softer, stone fruit direction than one might expect of a stronger beer, and it actually reminded judges of Silver Moon's Hydrosphere Fresh Hop IPA, built up to 6.7% and built on fresh Mosaic hops that ultimately led the beer more in a strawberry direction than guava nectar that this judge often associates with that varietal. Both were among the "smoothest" and easy-drinking beers we considered.

One of the more polarizing beers sampled was Sunriver's D'Kine, Hopped using wet Mosaic hops from Coleman Agriculture, I typically associate the hop with juicy guava but in this beer's case, a sharp bitterness and funkiness shined. It presented more bong water aroma than GoodLife's 150 Hippies, also part of the lineup, which garnered several comments about having a "coffee" like quality. Given its leafy astringency, the Amarillo hops that comprise this beer can sometimes throw huge orange and grapefruit notes but in this case, offered more pine resin and sandalwood.

For hop heads, these ephemeral beers are the equivalent of winos' Beaujolais nouveau.