From an Old House on Lopez Island

Kuinka is a band formed out of happenstance—one of those "it's a small world" moments. The four all grew up in Mount Vernon, Wash. While they ran in similar circles, they never really totally met. Miranda Zickler was reacquainted with brothers Nathan and Zach Hamer while they were all living in Brooklyn, randomly meeting at a diner in Union Square. As for Jillian Walker, she and Zickler had originally gone to elementary school together. After Walker attended an early Kuinka show in 2013, Zickler asked her along to help record and tour on the album. From there it just stuck. 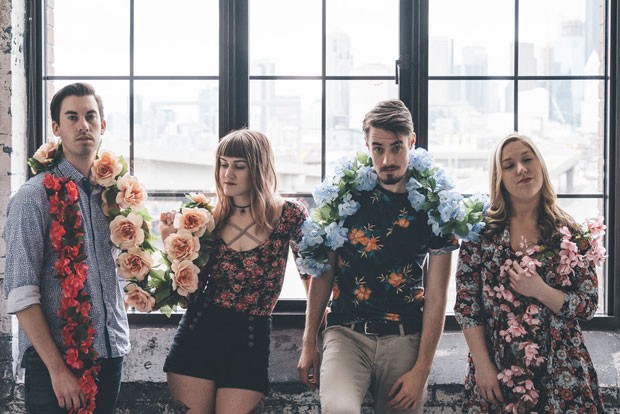 The Source spoke with Zickler over the phone about Kuinka's upcoming EP "Landlines," the band's sound and their experience with NPR.


Source Weekly: How long were you guys working on "Landlines?"

Miranda Zickler: It's been kind of a drawn-out sort of process. We went into a kind of writer's retreat situation at the end of 2017. Then we've just kind of been doing it in little fits and starts. Like recording things ourselves for the last year and a half.

SW: What did you guys do for the retreat? Did you travel somewhere remote?

MZ: We went to Lopez Island, which is in the San Juans up here. We stayed in – Jillian, our cellist's, like her distant relatives' kind of summer home? But it was in the dead of winter. So nothing was going on on the island. The house itself is like stuck in the '90s, in like a real way. There's no cell service and there's no Wi-Fi. So we had to call our loved ones on the landline in the house which is kind of where we got the title. It was really fun and special to be kind of, like, removed from everything in that way.

SW: What were some of the things you were all focused on with making "Landlines?" As far as your growth as a band or inspirations?

MZ: We definitely took a lot of inspiration from '90s nostalgia. We've been playing a lot more with, like, synthesizers, different guitar tones and different styles of writing. We've been doing all of the recording ourselves, which is something really different than we've done in the past, so that's been a learning process. It's an interesting animal.

SW: How do you blend all your unique styles together to make one sound?

MZ: You know, we never intended to make any specific type of music. It's just kind of whatever all of us are feeling at that point. We all kind of have diverse tastes in music so it works out well for us to kind of all collaborate and bring different things to the table. It always ends up sounding like Kuinka even though we're always changing and shifting.

SW: You guys were able to do a Tiny Desk Concert. What was that experience like?

MZ: Oh, it was amazing! We're all huge NPR nerds. We got to go in and tour the offices and it was so special – really a bucket list thing. Like our biggest goal was to do a Tiny Desk. It was really fun.

SW: Did you win that spot through your audition video?

MZ: So, we did a video every year for the contest. But we never won. NPR went on this Tiny Desk tour where they picked their favorite videos from each region. They had us come and do this show and Bob Boilen, who runs Tiny Desk, hosted. We chatted after and he asked us to come sometime after that. It was a really roundabout way. So, it was the contest that got us in front of them but we never won.

SW: Do you a have a favorite Tiny Desk performance?

MZ: Oh my gosh. There are so many good ones. Off the top of my head – OK Go did one years ago when they [NPR] was moving offices. So they did it in like 20 takes. They did it in the old office and in the moving truck on the way to the new office. And then in the new office. It was the only time you see the full offices. Every other video it looks like this tiny little space but when you actually pan around its this huge room with cubicles and desks and windows. So, I showed this one to the band and was like 'This is what we're in for!'