From Cindercone to Mud Lake

Cindercone Clay Center is closed, but a new studio has opened in its place

In early fall, Cindercone Clay Center quietly closed after 17 years as one of Bend's first and longest-running shared art studios. Its founder, Chad Fox (think Boneyard beer steins), is pursuing a new endeavor and returning to the simpler life of being a studio artist—allowing himself the joy of focusing on his own craft while working alongside his brothers in their family business, Snowfox Equipment. 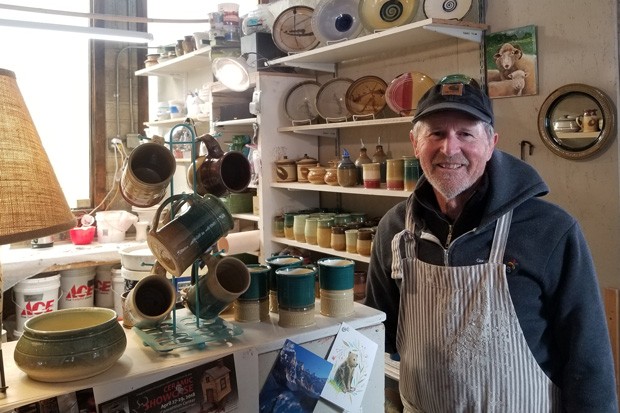 Normally, a closure of studio space would mark a devastating blow to the local art community—but studio member Alicia Renner, the woman behind Howl Attire and proprietor of The Northwest Trading Post, has stepped up to keep the studios open. Revamping the space and rebranding as Mud Lake Studios, Renner has big plans for the collective's future. She's starting with interior updates, as funding allows, and has hosted a handful of events, including Kaycee Anseth's, "In Marrow" exhibit.

"It was sad when Chad left but I didn't want that to mean that the studios, or my own business, would have to leave also," Renner said. "My aim is to respect the original vision of having a space with community worktables, kilns and wheels, shelf space—everything a potter would need—including classes, while also opening it up to other mediums and helping it continue to evolve. We're even working on figuring out an artist residency program."

Originally Cindercone was dedicated to clay workers. Now, as Mud Lake, occupants in the 16 studios range from potters and sculptors to painters and jewelry designers. There's even a vintage shop, Peaces by Lauren, nestled into studio member Lauren Cooley's space. Mud Lake Studios will also be the cornerstone of Bend's beloved Craft-O! Holiday Bazaar coming up in The Ironworks District Dec. 14 and 15.