Celebrating 100 years of supporting the next generation of farmers 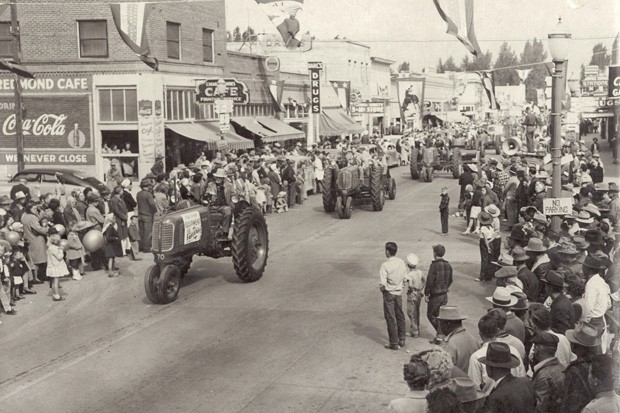 Back then, potatoes were an abundant and lucrative crop in Central Oregon—so popular, in fact, that starting in 1906, Redmond regularly held potato shows. The events brought farmers from all over the county together to discuss crop yields, methods and the industry as a whole.

County fairs have long been more than an "occasion of frolic," as one 1919 editorial from the (now defunct) Oregon City Enterprise newspaper noted. They're an opportunity to educate the next generation of farmers, with the educational component not taking a back seat to the entertainment. As the editorial stated:

"We should put [livestock] in the most conspicuous place in public exhibitions, give prominent honor to the men that raise them successfully, award liberal prizes for the best specimens, and do everything possible to make animal husbandry seem interesting and profitable."

Supporting agriculture in the modern age

One hundred years later, making agricultural jobs appealing to younger generations is more challenging than ever. According to U.S. Census data, the average age of U.S. farm producers in 2017 was 57.5 years—up 1.2 years from 2012, continuing a long-documented upward trend.

Popular youth leadership and agricultural organizations that are still around today didn't fully form until a decade after the Fair began. 4-H animal exhibits and auctions popped up at the Fair in 1927, according to archival records at the Deschutes Historical Museum, though the local chapters formed sometime in the early 1920s. The national Future Farmers of America organization was founded in 1928 by 33 farm boys from 18 states — including Oregon, according to Kallei Ouellette, Bend's FFA reporter. The Bend FFA chapter was founded in March 1953. By the mid '90s, it had moved to Mountain View High School to pair with the school's agricultural-focused science classes, says Bend FFA co-advisor Jeff Papke. The program includes classes in agroscience, natural resources, animal science, pre-vet medicine and more.

This year, 34 Bend FFA students are participating in the Deschutes County Fair. Most are showing animals, but a few are presenting projects they've been working on over the summer, including gardening, floriculture, nature photography and educational displays.

"A good Ag Ed program should have a very rigorous curriculum—it should try to welcome all students," says Papke.

That's something he feels they do exceptionally well—and the state FFA organization agrees. The Bend FFA chapter was named the best secondary middle school/high school program of the year in 2019. The program offers students a clear course pathway and offers a wide variety of agricultural and technical classes—such as welding and automotive classes.

"I think that that's what I'm most proud of," says Papke. "Any student at Mountain View could come look at our program and we could figure out a place for them."

Event students without land can participate in raising livestock for the Fair—it just takes a little more work.

Chelsea Buhmann, 17, will be a senior at Mountain View High School next year; transferring from Bend Senior High School. This is her second year raising a pig for the Fair, but she doesn't have rural land to raise it on, so she's made arrangements with another student to house her pig on their land.

Buhmann drives from her home on the south side of town out to farmland near Mountain View twice a day. Her pig was on the heavy side last year, but this year her pig is on the light side — in an effort to help the pig put on weight, she's got a few tricks up her sleeve.

“What we do is something that feeds and clothes the world. So that's our first step here in the classroom, is to get them to understand ‘what is agriculture, what does it actually look like day in day out’—and then how can you, as a younger person, look to improve it?” —Jaimee Brentano tweet this

"It's been a challenge in and of itself trying to figure out how to push him. I've been asking around for tricks—I've been putting confetti cake mix in the feed now to try to get him to eat," says Buhmann. An audible sigh is heard from her advisor, Papke, upon hearing this. "So, I've been adding supplements and the cake mix—and it's working now!"

Buhmann says the visual appeal and structure of the animal are mainly what judges are looking for at fair competitions. She's not the only one who's tried interesting food combos to help her pig pack on a few pounds. Joel Newman, a 15-year-old sophomore who is homeschooled, said he fed his pig eggs, among other things, last year. This year, he's raising a pig and a steer to show at the Fair.

Lauren Neumann, 16, joined FFA because she's always had a passion for agriculture, she says, and has been involved with 4-H for the past seven years. As a middle schooler, she would see the FFA kids in their blue and gold jackets—and says she thought they were pretty cool.

She's bringing one pig strictly for market and another for the showmanship and breeding category. How well you market your pig ahead of the auction, your connections in the community, and whether your breeder or family is well-known are some of the factors affecting the outcomes, she says. There's a lot at play beyond raising a healthy animal, and that's where the leadership and speaking skills that FFA cultivates can come into play.

Sonna Faulkner, 17, joined FFA at the behest of her mother, who participated in FFA when she was in high school. She plays competitive volleyball for Bend Senior High School and she didn't know if she'd be able to balance the obligations of both extracurricular activities. 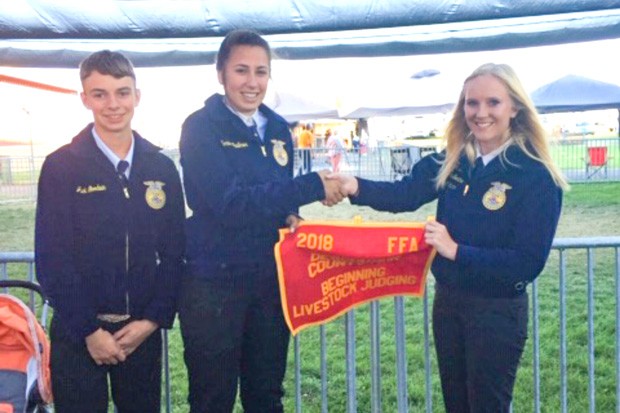 "The FFA has been really lenient with me being gone from meetings, which has helped a lot," says Faulkner. "I'm really glad that I did join, because it's been an amazing experience."

Faulkner's family owns 10 acres in Bend and 80 more in Powell Butte. She's bringing six head of steer to the Fair this year. She plans on majoring in business and minoring in animal science at Eastern Oregon University, where she received a full-ride scholarship to play volleyball. She hopes to start her own business involving agriculture and livestock after graduation, but she's not sure yet.

A future in farming?

After noticing that no one in the FFA advisor's office said they wanted to own and operate a farm—even those who grew up on farms—I asked them why.

"I think a lot of people our age get told not to," says Janelle Neumann, an 18-year-old who just graduated from Mountain View. The handful of students nod in agreement.

When asked if they knew anyone their age who intends to be a farmer or rancher after graduation, they could think of a couple names of students they felt would carry on their family farms, but that was it.

Buhmann says her family back in Iowa has steered her away from farming because it's a really hard lifestyle.

"You can't take days off, it's a full-time commitment. Most people don't get vacation or anything like that," says Buhmann. "I think one of the biggest things, especially over there with being in tornado alley, is it's really high risk and there's not a lot of security in the income."

Other students chime in with educated and level-headed evaluations of the industry—from unstable market conditions caused by prohibitive rules and regulations, the high cost of high-tech farming equipment that buries farmers in debt—to the patenting of seeds by corporations, making it so farmers have to buy seeds year after year and the misinformation surrounding genetically modified organisms.

These students are well informed, an all have a passion for agriculture—but the barriers to becoming a successful farmer or rancher are ever present in their minds. So the question remains—how to raise the next generation of farmers?

"We have a family farm that we're looking to the next generation on who's going to go back to it, and we're struggling with that," says Jaimee Brentano, co-advisor of the Bend FFA. "As I started looking toward my future, I didn't see myself wanting to drive the tractor every day. I really wanted to more tell people about what we do when we drive the tractor and why we do it."

Both FFA advisors believe education—not just for students interested in agriculture, but for every U.S. citizen—is an important step in creating change for farmers.

"What we do is something that feeds and clothes the world," says Brentano. "So that's our first step here in the classroom, is to get them to understand 'what is agriculture, what does it actually look like, day in day out'—and then how can you, as a younger person, look to improve it?"

"We're scratching and clawing for people to go into agriculture," he says. "Whether it be in production at the farm level, business marketing, processing — companies are begging for people."

While both co-advisors in the Bend FFA program aim to educate the next generation of farmers and tradespeople, they know the skills learned in FFA are invaluable, no matter what life hands students after high school.

"It's unlocking potential of these students that they never knew they had," says Papke. "Everything from the opportunity to where you can look somebody in the eye, give them a firm handshake and introduce yourself or where you can talk intelligently on a specific topic."

Presenting at the Deschutes County Fair 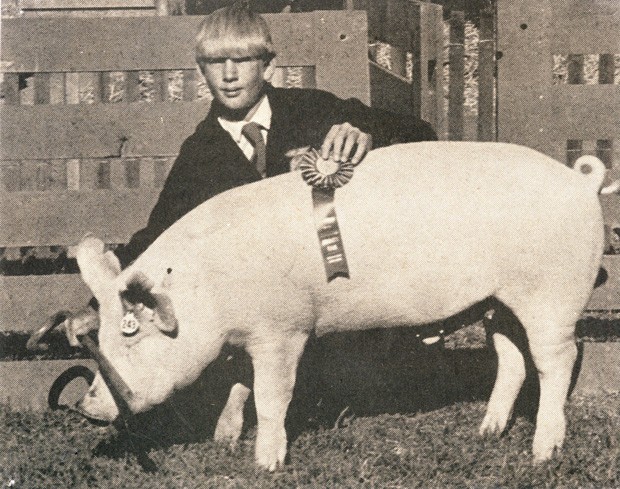 Students will present their animals and projects at the Deschutes County Fair throughout the week, from July 31 to Aug. 4. The full schedule can be viewed online at expo.deschutes.org or with the Fair's app for iPhone and Android.