From Rainshadow to River | Outside Features | Bend | The Source Weekly - Bend, Oregon

From Rainshadow to River

It's pretty uncommon to bring farm-to-table organic meals for a 21-day adventure on the Colorado River. Here's how one local group achieved it

Whether on her farm, at market, or on the river, Sarahlee Lawrence, owner/operator/founder of Rainshadow Organics, is perpetually surrounded by an entourage of farm folk, or "farmily" as she coins it. In talking to the interns, apprentices and other Rainshadow contributors, it's clear they're committed to the new wave of modern farming—and Lawrence is leading the charge. 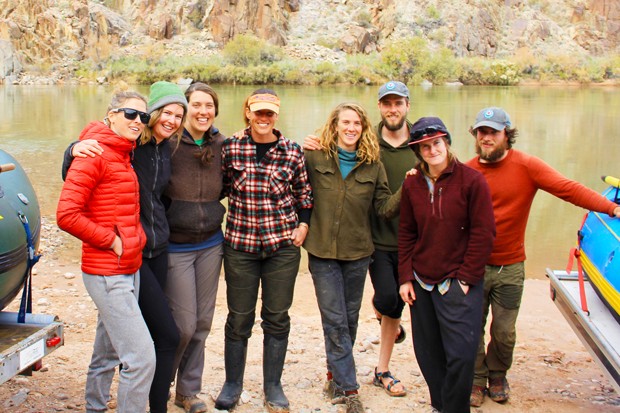 Recently, Lawrence and her farmily brought their love for fresh veggies, protein and grains (all cultivated on the 200-acre spread Lawrence calls home) to the Colorado River for an early winter, 21-day Grand Canyon rafting trip, during which Lawrence and her cronies grew and prepared 75 percent of the calories consumed on the adventure.

Lawrence's desire to meld rafting and farming has been distilling since she began her commercial rowing career in the Canyon over a decade ago.

Her commitment to eating only what she manifests on the farm was never more evident than at a Nevadan café counter, en route to the put-in. Lawrence had kept a unsecured pint of honey and mason jar of milk nested on the bed of her truck, unabashedly toting them into hotels and restaurants. It was a case of Bring Your Own Milk and Honey.

Once the trip was underway, everyday the group feasted on meals including curry, chicken soup, ratatouille, chili verde, empanadas and Sarah's meaty spaghetti sauce. Burritos filled with beans, beets, pulled pork, hamburger, hearty greens and carrots served as lunch, while breakfast was a mix of oats (not grown at the farm) with a rotating choice of bacon, sausage or ham. The phrase "eating like queens" was an understatement.

Homemade food preparation for rafting the Grand Canyon is pretty much unheard of. To ease the difficulty of food and other logistics, most groups are outfitted by companies near Flagstaff, Ariz. Groups show up at Lee's Ferry put-in, where gear, including rafts and food, has been completely rigged. Outfitters supply elaborate maps and menus denoting the location of each meal, its contents and where it can be found in any number of coolers. Of the five groups the farmily crossed paths with on the Colorado River, none had prepared its own food.

One group had grossly underestimated their toilet paper rations. Mid-trip, they traded us s'more fixings for our surplus. Admittedly, in the planning phase, we had overlooked the benefits of chocolate, graham crackers and marshmallow, opting to focus on glorious Dutch oven desserts.

To get ready, the farmily spent days of stolen hours before and after their 9-to-5 schedules to cook and freeze meals. Meals were transported from Oregon via Lawrence's farm rig in chili bins kept cold with ice blocks and dry ice. 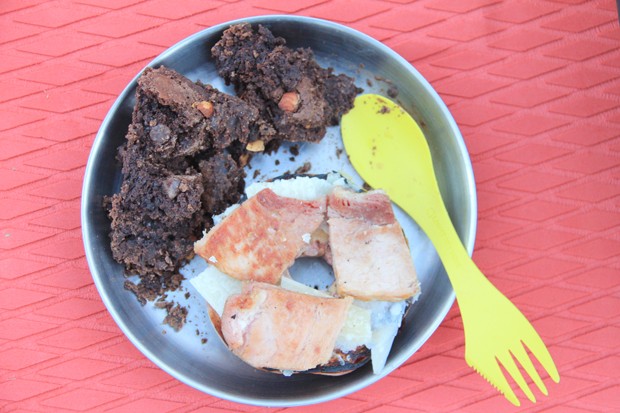 Of the recipes, Lawrence commented, "I like the chili verde best. It contains pulled pork, tomatoes and beans, all produced at Rainshadow. We harvest, dry and then shell the beans ourselves, by hand. It was just a wonderful thing to have the farm in the Canyon with us—including our drinks, our breakfast, our lunch, our dinner, even our snacks. Plus, the ease of having food precooked was pretty incredible!"

One night while the camp slumbered, Lawrence woke to a smorgasbord being enjoyed by ring-tailed cats in our convertible kitchen. Apparently, they had heard about the quality of food we'd brought all the way from Oregon. Alas, the hatches were battened and they'll have to wait until our next trip to try for another taste of Sarah's famous meaty spaghetti sauce or the chili verde. To be continued...

Although not yet in circulation, keep your eye out for Rainshadow's farm-to-table cookbook, available sometime this year.