From Romance Writer to Farm-to-Table Author

An intimate look at local farms and kitchens in "Bend Food" 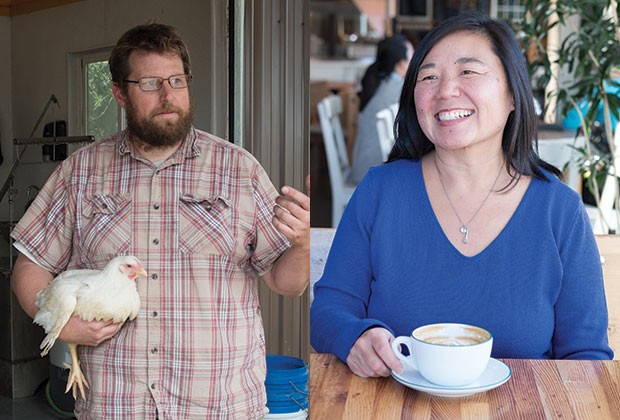 Dating weird guys in Alaska led Sara Rishforth to write "Bend Food: Stories of Local Farms and Kitchens." Rishforth grew up in South Carolina but lived in Alaska for eight years before moving to Central Oregon. While in the 49th state, she had dating experiences so interesting that they inspired her to write a series of non-fiction romance novels, starting with "Adventures in Dating." The second book in the series featured a romance with a talented chef and included recipes. Arcadia Publishing and The History Press discovered her from those novels and asked her if she would be interested in writing a book about Bend's farm-to-table movement for their series, "American Palate." If you've ever watched a chef or shopped at the farmer's markets and wanted to learn more about the real people behind the food scene, you'll love "Bend Food." The book is separated into easy-to-digest sections, introducing readers to Oregon history, farmers, chefs and ways to buy local food. You won't find every restaurant or farmer engaged in the farm-to-table movement around Bend featured in the book, but there's enough there for readers to really develop a connection to the movement.

I met with Rishforth at The Bite in Tumalo to learn more about the book. As we sat in the sun in folding camp chairs, Rishforth told me her research for the book was fluid. She would meet with a farmer or chef and then ask them for recommendations to others. This method led her to meet people and visit places she'd never been.

When she interviewed Anita and Justice Hoffman at The Great American Egg, Rishforth said, "I turned green when I watched chickens being slaughtered, but kept taking notes. I still eat chicken!" She recounts the slaughtering process in fine detail in the book. What you get from her description isn't a gruesome tale. Well, maybe it is a little gory—but it's also insight into a scene where people care for and slaughter animals themselves, instead of sending them to a commercial processor. It was incredible to discover the volume coming out of our local farms. I learned the home of The Great American Egg, Powell Butte, was known nationally for poultry in the early 20th century.

Rishforth excels at sharing interesting details about her subjects. When I finished reading the book I found myself sharing those nuggets with my partner. On a drive up to Six Lakes, I couldn't help but tell him that Jackson's Corner uses beets to replace tomatoes when they aren't in season. I went on about how I was surprised Dump City Dumplings was part of the farm-to-table movement. As the road curved and Mount Bachelor appeared, I told him we could make a Sunny Yoga Kitchen Grateful Bowl and escebeche-style beet pickles from 123 Ramen. This book was made for food fanatics like me.

When I asked Rishforth what she wanted out of the book, she said, "I hope it educates people." For example, she says, "some farms are following organic principles but can't afford certification."

The publication date for "Bend Food" is June 25, after which you can buy a copy online or at Roundabout Books, Central Oregon Locavore, Dudley's Bookshop and Bluebird Coffee. Her first book signing June 27.