From The Fire | The Source Weekly - Bend, Oregon

Atribal member from the Confederated Tribes of Warm Springs, Scott Kalama is best known for his rapping skills—which you might have heard under the moniker, Blue Flamez. He's an award-winning artist making strides for Native Americans, bringing positivity to his roots. 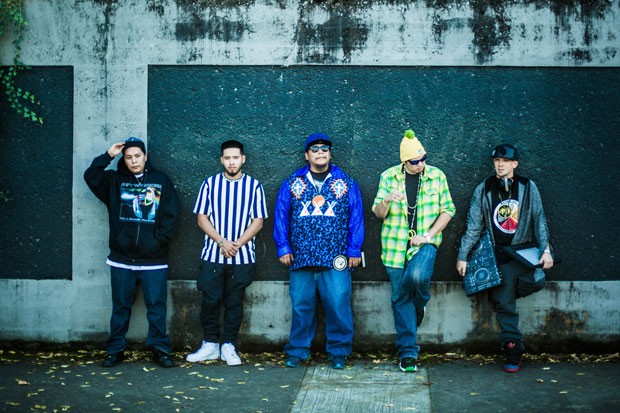 Through his music, Kalama showcases an inside perspective to living life as an indigenous person, and what it's like on the reservation. He recently held a show at Central Oregon Community College, where he played many Blue Flamez songs and showed some of his music videos. Kalama says college shows are some of his favorites because there is always a positive atmosphere, and he praised the crowd interaction at COCC.

Read our Q&A with Blue Flamez below to get some insight into what makes the rapper tick—and the motivations behind his music.

Source Weekly: Do you remember your first introduction to rap music? Why do you think you were so drawn to it?

Blue Flamez: My first introduction to rap music was my older brother—he always bought CDs and tapes. When he was done listening, he would hand 'em down to me to listen to. I remember listening to Ice T's "Colors," NWA, and Too Short. When I first heard Tupac on "Dear Mama,"—"when it seems that I'm hopeless, you say the words that can get me back in focus." It caught my ear and made me start paying more attention to the lyrics.

SW: Where did the name Blue Flamez come from?

BF:  Blue Flamez came from a prayer ceremony I had at my house in Warm Springs. I lost my sister, Faron Kalama, to a horrible death. It made me angry and my mom told me the best thing I could do to help the situation was to pray. After the ceremony the fire turned all blue. I asked the medicine man what that represents, and he said that it means your ancestors were here with you all the through the night, and everything we prayed for is going to come true—after that I called myself Blue Flamez. When I perform, I have a crew with me—my brother, Levi Kalama, producer Yamio 263, Andy Fuentes, flutist James Greeley, and on a good day we have some of my family there supporting.

SW: The Native American Music Awards just happened this month. For you, what's it like to be around a large group of musicians and artists who truly understand your background and get to celebrate everyone's work?

BF: The award shows are fun and a good place to network for features from other artists and mingle with the stars. This year they had WWE star Mickie James and Wes Studi, the first Native actor to be presented an Oscar award for his efforts. It's always a surreal feeling being around other artists with national recognition and it's just good to be nominated, but even better to win. I won in 2016 for Best Music Video for the "Rez Life" music video and was nominated in 2018 and 2019. So, my goal is to stay among those who are nominated every year and hopefully win another Nammy.

SW: Not only do you rap about where you came from, but you show a lot of scenes and people from the reservation in your music videos. Why do you think it's important for people on the outside to see a glimpse of that world?

BF: I feel like it's important for me to remember where I come from and be proud of my ancestral roots. That's why I show where I am from—but to me, showing this glimpse of the reservation may help my people one day. Maybe we can get an investor or grant funding to improve my community. I always dream of making it big and helping improve the reservation environment.

SW: There's been concern that Warm Springs could continue to have water issues throughout the winter. I know that people can donate directly to The Chúush Fund, but are there any other ways that people can help out?

BF: I was just thinking about that issue. Right now, the tribe is opening a warming shelter for people that are homeless in Warm Springs. They are in need of blankets, jackets, food, and water. You can contact Caroline Cruz at Human Services for more information on donations.

SW: Do you have any new music in the works right now or anything set to drop soon?

BF:  My latest album, "Cultural Appropriation," will be dropping in February 2020 with features from Kokane, YL, Kaos and Tanaya Winder. It's a mixture of political, party and poetry.