From the Wheelchair to the Mountaintop | Local News | Bend | The Source Weekly - Bend, Oregon

Every morning Jeff Rasmussen wakes up, looks himself in the mirror and says the same thing: "How am I still here?"

"It's insane. I literally shouldn't be here," he says. 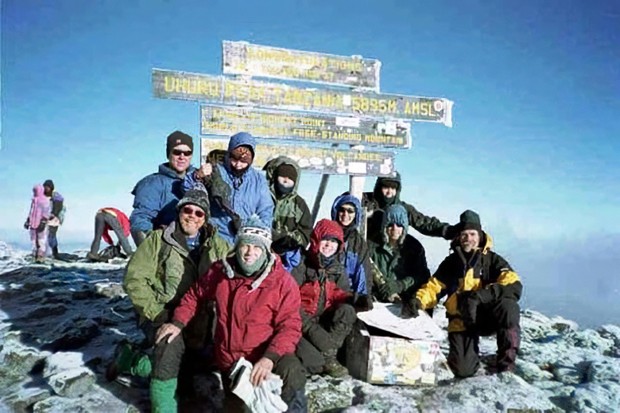 In November 2012, Rasmussen collapsed in his living room in Palm Desert, California. His girlfriend and her two children happened to be in the room with him and called 911. His son, Chris, 24 at the time, ran every light on the way to Eisenhower Medical Center in Rancho Mirage and beat the ambulance there.

The doctor arrived within 15 minutes and ran an MRI. They discovered that Rasmussen had glioblastoma, a rare form of brain cancer that occurs in one in 10,000 cancer cases and is almost always lethal. The tumor had grown so big that it had crushed Rasmussen's brain stem, causing him to collapse and go into a coma.

Doctors performed an emergency craniotomy to relieve the pressure and a surgery to remove most of the tumor. But they warned Chris Rasmussen that even if his father woke up, he would most likely be paralyzed, or lose his ability to speak or see. He was in a coma for six or seven days. Then one day, he woke up.

He was not used to being in this setting. He was a world traveler, a three-time Iron Man champion and had just climbed to the top of Mount Kilimanjaro, part of the Seven Summits Challenge.

When he found out his diagnosis, he read the statistics on survival.

According to statistics, he had two, maybe three months to live. According to the stories he read online, most of the people died within a year. He read about one person who had just been diagnosed with the same thing and had moved to Oregon to schedule their own death.

"I read all of that and was like, 'Oh hell no, I'm going down swinging," says Rasmussen.

"Because to me...this is heaven on Earth. I mean, yeah, there's a lot of catastrophe down here in this mortal experience, but I mean...it's beautiful. I was never the kind of guy who needed the cancer-death-bed lesson to learn how awesome and precious life is."

Before he found out he had cancer, he would sit out on his patio, drink his coffee and enjoy the hummingbirds visiting his bird feeder. He would look at a strawberry and think about how it was the only fruit with the seeds on the outside.

His best friend of 20 years, Christan Nguyen, a psychotherapist based out of Huntington Beach who happens to be a happiness researcher and is currently getting his Ph.D. in the subject, has been searching the world for the happiest people on Earth, and Jeff, he says, is one of his prime subjects.

"And I'm really picky about who I consider truly happy," he says. "But Jeff has been consistently happy for 20 years."

He and Rasmussen were roommates at one point, and he says part of the reason he thinks Rasmussen is so happy is his selflessness, which Nguyen experienced many times while living with him. He often saw him give away all of his money to others to be able to buy something to eat, even if it meant he couldn't eat himself.

"I would say, 'Jeff, you've got to stop giving away your money to other people. You need to eat too!'" he says.

Rasmussen would always tell him that it was OK, that he had enough money to buy some bananas. According to Nguyen, Rasmussen would constantly live off of nuts and bananas so that he could make sure other people could eat. Once Nguyen said he gave Rasmussen his Lexus, and Rasmussen ended up giving it away to someone else. Rasmussen would visit with Nguyen's mother for hours just sitting with her and watching TV so she wasn't alone while Nguyen was traveling for work, just to make sure she was OK.

"She didn't speak any English, and he didn't speak a word of Vietnamese. But it didn't matter. He was happy to just sit there with her and keep her company. That's the kind of person he is. He is selfless, and appreciates the simple things, and he's always happy, even when he has a brain tumor," Nguyen said.

So how do you stay happy when you find out you have a deadly brain tumor?

Rasmussen says adversity is an essential part of the blessing.

"I think the blessing, when you are dealt a weird disease or these ailments, is the contrast. The best part of life is the contrast. If your life was always smooth sailing and blue skies, and it's like retirement all of the time, no problems, you might not realize that. But when you have such a contrast between where you were in the dumps, and then the recovery or the success, or your life moving on to greener pastures, if you have that contrast, that's what makes everything even more special and vivid," he says. "It's like the old saying 'The sweet ain't sweet without the bitter.'"

So, he decided to treat his diagnosis like his next Iron Man Triathlon. He went through radiation, chemotherapy and a year and half of oral chemo, until one day he had a revelation at church that he should get off all Western medicine. He started taking Rick Simpson cannabis oil, changed his diet to only things you could find in the ground or pick off of a tree, drank alkaline water and experimented with cancer-fighting superfoods like apricot kernels. He went back to the hospital, and they told him he needed more chemotherapy and more surgeries. At that point he was walking, talking and felt fully back to his same old self.

So, he went down the street to Providence Mission Hospital in Mission Viejo for a second opinion.

"Everything looks fine to us," they told him.

After battling a deadly cancer for the past year and a half and quitting all Western medicine, he walked out of that hospital with a clean bill of health.

So, what does one of the happiest people on earth do when they cheat death? 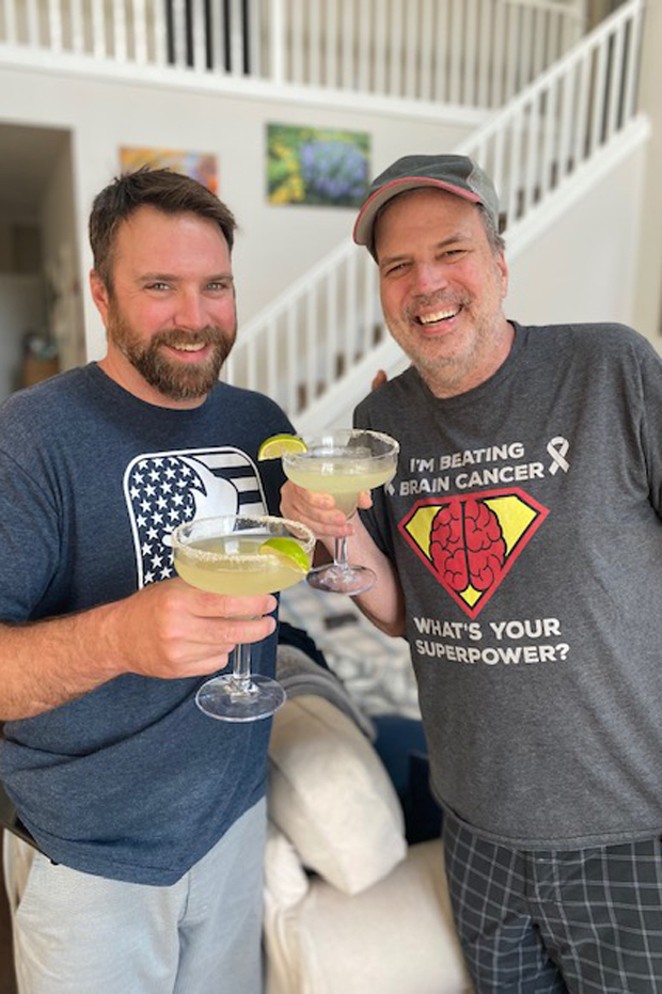 And he went straight back to it. He started with a smaller peak in Australia called Mount Kosciuszko, followed by the highest peak in South America, Mount Aconcagua in the Andes.

During that trip he got stuck at the bus station in Chile for three days because they had a 50-year, record-breaking snowstorm. While at the bus station, all of his belongings got stolen, including all of his mountaineering gear. He ended up homeless in the bus station with only his phone to his name. Then he was detained at a police station for three days. The storm finally ended, Nguyen sent him money and Rasmussen headed to Mendoza, Argentina, where he restocked and began his ascent. Did he make it to the summit? Of course he did.

"Most people would cry and go home at that point, but that's not Jeff," says Nguyen. "He has something that other people don't have in them. A kind of fearlessness."

Rasmussen lived in Thailand for the next eight years, kept climbing mountains and traveling the world. Last year, about a year after moving to Bend to be closer to his son, he found out his cancer had come back. He had to get another emergency surgery, and again was told he only had a couple of months to live. Since it was during COVID, this meant a lot of time being alone, not getting to spend time with his son or his son's girlfriend, Genna Salmon. Chris actually proposed to her outside of Jeff's hospital window right after his surgery so he could be a part of it. Local news cameras were there to film it.

He had a lot of complications throughout the year; at one point he was read his last rights. He had blood clots, water on the brain and temporarily lost his ability to walk. He was only allowed one visitor at a time, so his son and soon-to-be daughter-in-law would rotate. Salmon was his fiercest advocate, finding resources and fighting for him to have the best care possible. His son provided the comic relief Rasmussen relies on to keep an upbeat attitude.

Between the two of them and their support, an emergency shunt surgery, his son's "boot camps" where he would get him to walk even a few steps a day outside, and an extremely intensive rehabilitation therapy that requires one to meet the very specific criteria of being extremely determined to get through, Rasmussen was walking and talking normally by January of this year. He'd defied a deadly brain tumor not once, but twice.

Rasmussen recently had two small tumors reappear and is again receiving chemo. But the fact that he is walking and has full cognitive ability after what he went through in the last year—the fact that he is alive—is a miracle in itself.

His doctors in California would call him "The Rhino" because of his resistance to sedatives. His doctors in Bend now call him their "Outlier." They can't believe their eyes. 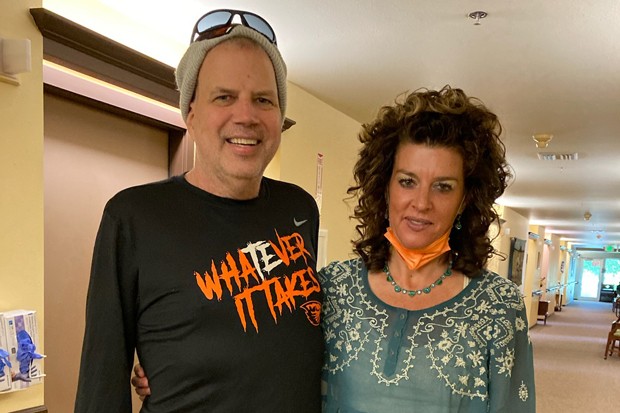 His physical therapist Amy Musgrave and Rasmussen formed a special bond during his rehabilitation during the past year, and she agrees that his outlook on life is what keeps him going.

"He is, without a doubt, extraordinary. He embraces everything he can do and enjoys it to his fullest – that is what continues to move him forward," she said. "The thing with Jeff is he has something that a lot of us don't have: when we get catastrophic news or adversity we get totally derailed, like, oh my god, done, over. And Jeff has this ability to pivot. He pivots, shifts his goals, shifts to a new plan and does whatever it takes."

What's next for Rasmussen? First, after finishing chemo, he wants to walk down the aisle as groomsman in his son's wedding this month. Then, because he believes where the mind goes, the body will follow, Rasmussen plans on climbing Denali, the next mountain on his list.

"Everest," says Rasmussen. "Whatever it takes."

Related Psych Trip: People are using psychedelics as a form of therapy. Can it be a path out of depression, PTSD or anxiety?

Psych Trip
People are using psychedelics as a form of therapy. Can it be a path out of depression, PTSD or anxiety?
By Nicole Vulcan
Local News