A look at The Color Study's connection-pondering second LP

Scott Oliphant's experimental project, The Color Study, has been releasing some of the most exciting music to come out of Bend since it began. In 2020 the band released its self-titled debut album, and is now back with its follow-up: the 10-track "Future Past Present Tense." 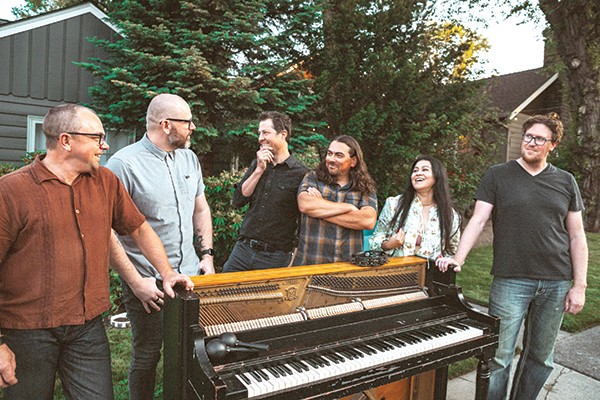 On the first record, Oliphant and Co. tackled the emotions and journey of navigating a lost relationship, whereas "Future Past Present Tense" shows the band exploring the power of interpersonal connections and how these affect life on a grander scale. The album will lead listeners through moments of psychedelia-tinted power pop that really get one questioning not only your path as you travel through life on Earth, but also those around you as well.

"How many times have we met? How many lines are running parallel and never connect?" sings Oliphant on the album's title track. It's these types of questions that get you wondering about all the people in life who you may have crossed paths with at some point—someone randomly caught in the background of a photo and the people you see on the sidewalk are just a couple examples on the album. We're all just strangers at one point or another, but who we break those walls down with and choose to share life with greatly impacts not just your own story, but others' as well. Oliphant's vivid descriptors and his use of imagery in much of the lyrics on "Future Past Present Tense" help to better understand these complicated ideas of the butterfly effect we have on each other.

The layers of instrumentation on The Color Study's second album are insane—but in the same way a Damian Lillard three-point shot is insane. It doesn't seem like it should work or go in, but then... *swish.*

The variety of musicality is something I loved about The Color Study's first record, and they've gone even bigger this time around. Whether it's the raucous fuzz-guitar ripping through the bones of a track, to the horns that pop off gleefully or slide in smooth with a heavier emotion, The Color Study takes everything they've got and turns it into a kaleidoscopic rock affair.

Songs like "Satellite" and "Sidewalk" really showcase the band's ability to utilize pacing as they build up these spectacles of sound that deliver a punch to the listener. They are able to carry this sense of softness and thoughtfulness, while still being able to deliver a song that doesn't lack energy and doesn't feel boring.

Along with Oliphant leading the way, The Color Study is Melissa Atillo on keys and vocals, Matt Jackson on bass, Miguel Mendoza on horns, Andy Jacobs on drums and vocals and Steve Reinhardt on lead guitar. For those interested in listening, which I highly recommend, you can find "Future Past Present Tense" on Bandcamp, Apple Music and Spotify. Be sure to check out the band's album release show this Saturday, Nov. 19, at Volcanic Theatre Pub.