Gerrymandering and Disenfranchisement Just Arrived In Your Mailbox

In the past week or so, voters around the state have received a little card in the mail—typically an innocuous reminder of one's political party affiliation and a confirmation of the voting districts in which one resides. Simple enough, but this time around, following the most recent U.S. Census and the subsequent redistricting process, those cards require a little more review.

Some voters on the northern side of Bend will find that they're no longer voting in the race for House District 54, that "donut hole" district carved out for Bend some time ago during another redistricting process. Some of those voters will find that they now belong to House District 53, folding them in with voters in parts of Redmond... but not all of Redmond. That district, too, is changed. Now, some voters in Redmond continue to vote in House 53, while others find themselves lumped in with voters in Prineville. Some may find themselves investigating just who it is who represents them, not yet having any communication with or knowledge of that representative. 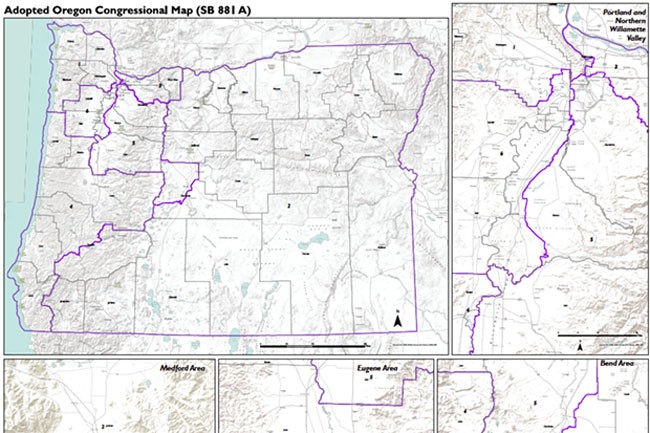 It's a similar story for our representation in the U.S. Congress. Central Oregon was once part of the massive Congressional District 2, which took up all of the real estate east of the Cascades plus Medford. Now voters in this area are part of Congressional District 5—a district that snakes a weird arm over the mountains and grabs up parts of Clackamas County. Instead of voting to determine whether we want to keep freshman Congressman Cliff Bentz in office, we'll be among the suburban masses in the valley voting in the district currently represented by Kurt Schrader.

When redistricting, state leaders are called upon to find "communities of interest" and keep them together. It's hard to see that right now. Redistricting is supposed to balance population numbers among districts, as well as endeavor to keep communities of interest together. It's a challenging process. Unfortunately, What we have in Redmond, among the fastest-growing towns in Oregon, is the opposite. Redmond voters are correct to take umbrage about the failure to keep their growing area together. As it stands, the parents of kids in the very same school will be represented by different people in Salem.

At the Congressional level, Central Oregonians will find themselves competing for resources against suburban Portland-area residents. One need only look to how the federal-level monies from the CARES Act were snapped up in the Portland area to see how that can play out.

With the new district maps in place and the maps signed off on by the governor back in September, there's little recourse for local residents now to ask for a change. The confusion some may be experiencing at the arrival of that little voter confirmation card this week may just be the beginning of a new and protracted exercise in voter disenfranchisement east of the Cascades. Voters here often decry the fact that the state seems to be run from its major metropolitan area; that rural and non-Portland-area residents' voices are often drowned out. All at once, we see the population of Central Oregon growing and its influence widening—and those at the levers of power in state government appearing to do their damnedest to gerrymander their way into containing it. While we don't share the same priorities as some of the more right-leaning voters in Central Oregon, we also recognize that disenfranchising them isn't fair, either, and that their growing resentment may have consequences.

No one was going to get everything they wanted during the redistricting process. But now that that our districts are about to vote, we have less faith in the process. We hope those voters in suburban Clackamas have our best interests at heart.