Get Hype for Figure Skating | The Source Weekly - Bend, Oregon

As the winter season approaches, The Pavilion on the west side of Bend is preparing its facilities for more cold-weather-orientated activities like figure skating, ice hockey and curling. Since 2015, groups including the Bend Ice Figure Skating Club have been calling the ice rink at The Pavilion home. The figure skating club is open to all ages and skill levels, so anybody can learn or tighten up their skills with the help of both coaches and club members.

"We encourage the public to come and enjoy," Vice President and Coach Anne-Marie Daggett said. Registration for the club is open all season, which runs from Oct. 30 until the beginning of April.

The club's skaters have endless opportunities to skate freely, alone or with other members—though the club will officially meet every Monday from 6am to 7am and Saturday from 7am to 8:30am during this year's season.

Bend's figure skating club is more recreationally oriented, however, each member of the local club is automatically a certified member of the United States Figure Skating organization and all have the ability to compete in competitions. tweet this

Bend's figure skating club is more recreationally oriented, however, each member of the local club is automatically a certified member of the United States Figure Skating organization and all have the ability to compete in competitions. Along with the free skate, training and competition options, club members also host events for public viewing throughout the season. In the past, attendees were treated with a Broadway-themed show. For this year's end-of-season show, club President Rebecca White and VP Daggett are hush-hush. The bit of mystery adds excitement and anticipation for the program, which skaters train for from the start of the season.

To keep from skating on thin ice, the nonprofit club receives funding and support from its members and the surrounding community. Fundraising, donations and membership fees all play a part in funding for the organization. In the future, White hopes funding opportunities coming from bigger, more developed corporate sponsors. 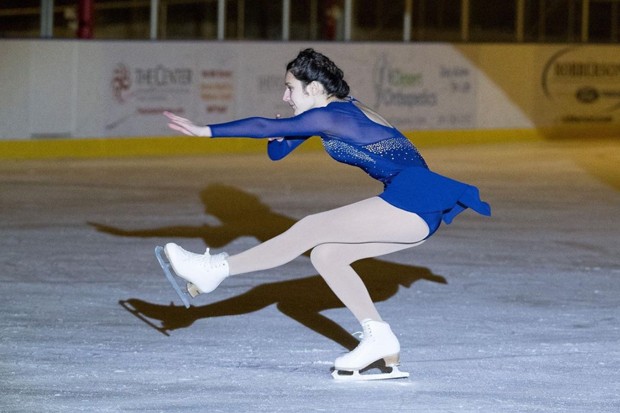 Additionally, both Daggett and White are freezing up other ideas to thaw out for later dates. For example, Daggett hopes to one day see the rink open year-round and becoming more professional.

"It's hard to be a professional rink when its only seasonal," she said. Other club leaders are trying to attract more coaches and professionals to the Bend area in order to give the club a more prestigious feel. "We want to grow the club to its full potential and involve the community a lot more," Daggett added.

An open house at The Pavilion for the ice-skating club is scheduled for Sat., Oct. 16 from 2:30 to 3:30pm. Visitors will be able to meet and greet future club members and coaches, order and get fitted for skates and watch a video showing one of last year's performances.

Interested parties can visit bendicefigureskatingclub.org for more information regarding sign-ups, memberships and other frequently asked questions.

The Return of Big-Rink Hockey!

After a year-long hiatus due to COVID, the adult hockey league at The Pavilion is back, where locals can show up for fun or plan to play competitively at Central Oregon's only NHL-sized ice rink. All ages and skill levels join expert coaches help develop fundamental skills necessary for hockey. To get into the Gretzky spirit all winter long, adults not already registered for the Hockey League can take part in the "Adult Skills and Drills" camp that starts Oct. 22. As of this writing, spots were still open for that offering, as well as for Bend Park and Recreation District's "Sharpen Your Skating Skills" workshops.

Also back at The Pavilion this season: ice time for curlers, hockey players and more. But with registration required for those activities, all sessions were full as of this writing, according to BPRD's online registration portal.

Related If You're New Here: A Primer on Ice Skating: Some deets on where to go for ice skating in Bend and beyond

If You're New Here: A Primer on Ice Skating
Some deets on where to go for ice skating in Bend and beyond
By Nicole Vulcan
Central Oregon Visitors Guide