Get to Know Karyn Ann

A Q&A with the Portland-based singer/songwriter

Karyn Ann's last album, "Be Loud," was released in 2018—10 tracks of poppy, folky and sometimes funky pieces of music that showcase the Portland-based singer's knack for writing songs that are relatable to the listener. 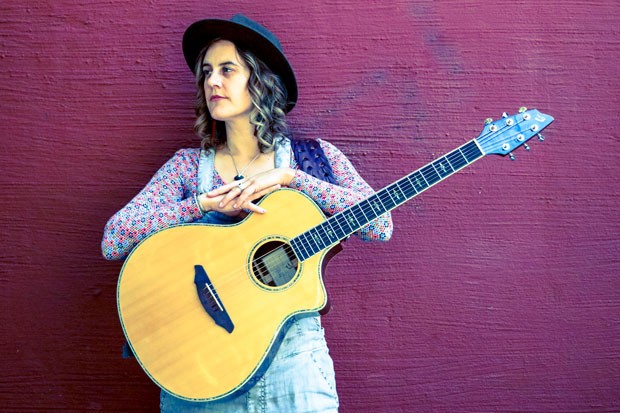 Ann is set to make an appearance at The Open Door in Sisters on Jan. 6, so I reached out to her the week of Christmas to get a little insight into who she is as an artist. Check out our Q&A below to learn a little bit about Ann's inspirations as an artist, her upcoming music and the awesome album cover for "Be Loud."

Source Weekly: First off, I wanted to ask you about the cover on your album "Be Loud," because it's incredible work. How did you shoot that and what gave you the idea for it?

Karyn Ann: That's a good question. My husband actually planned the photo shoot as a fun anniversary activity for us, after our friend/musician Shane Brown told him about the series. I went to the photo shoot not knowing I'd being using one of the shots as my album cover. Photographer Jordan Henline of 88.8 Film and Photography created the series by placing a leaf blower right in the subject's face and snapping a photo. His whole series is viewable on Instagram. The decision to make one of the photos as my album cover came after several of my friends said, "Hey, that's the album cover." I thought it fit the title of the album well and knew it would draw attention and questions.

SW: When did you figure out that music was something you wanted to be a part of?

KA: I think I've always known I wanted music to be the focus of my life. Growing up I would sing all the time, and I took piano and violin lessons until I picked up the guitar at age 14. It was around then that I became enamored with songwriting. I went on to college and grad school to earn degrees in geology, and tried my hand as a career geologist, but I always came back to music. When I eventually landed in Portland, I made the choice to pursue music as a career/job, and I haven't looked back.

SW: You can definitely hear a little bit of country, folk and pop all kind of nesting in your sound. Were there any artists you naturally gravitated toward growing up?

KA: As a kid I listened to Michael Bolton, Aretha Franklin, Annie Lennox and Bette Midler. I've always been drawn to big, powerful voices. In high school I really glommed onto artists like Fiona Apple, Sarah McLachlan, Sheryl Crow because of their songwriting. I also love old gospel singers like Sister Rosetta Tharpe, and classic R&B/jazz singers like Etta James and Billie Holiday. Back in the late 2000s there was an emergence of blue-eyed soul from artists like Adele and Amy Winehouse, and I really connected to those sounds. Most recently I think my biggest influences have been Brandi Carlile, Susan Tedeschi and Foy Vance. I know my tastes are all over the place, but I guess what it comes down to is the authenticity of the songwriting and performance, and how much I connect to it.

SW: Do you have any new music in the works right now?

KA: Yes, I do! And I am really excited to share it! I will be releasing a single on March 18. Then I'll be releasing a couple more singles into the spring/summer. I am also starting to record a new EP in January which will mark a significant departure from my previous material. So, stay tuned!

SW: The year is just ending, so I'm curious, what was your favorite album from 2019 and why?

KA: Favorite album of the year... that would have to be "Enderness" by A.A. Bondy. It's his first release since 2011. My husband actually introduced me to his music. To me, the album subtlety comments on our dark troubled world and society, but also leaves a lot open for interpretation. I just really love the lyrics and production.