Get to Know the Common Nighthawk | The Source Weekly - Bend, Oregon

Get to Know the Common Nighthawk

At dusk or dawn, look for these swooping, diving hunters on their constant mission to devour flying insects

Ahh, summertime in Central Oregon—days that seem to stretch on forever, dusk walks around town as the sun dips below the Three Sisters, and then there's the diving flight of common nighthawks. These unusual birds are fascinating on so many fronts, from their nesting behavior to their diving displays to their annual migration. Let's take a closer look at these birds.

The Common nighthawk arrives in Central Oregon in late spring and early summer, making it a bird that is often identified with this time of year. They are part of the goatsucker family, named after an incorrect, previously held belief that they flew into barns and sucked the blood of goats. Common nighthawks are around 9.5 inches long with a wingspan around 24 inches. They are a mottled brown, gray, white color that helps camouflage them when roosting. In addition, they have a white patch on the outside of both flight wings. They live in towns, recently burned forests, open woodlands, sagebrush flats and rocky outcroppings. 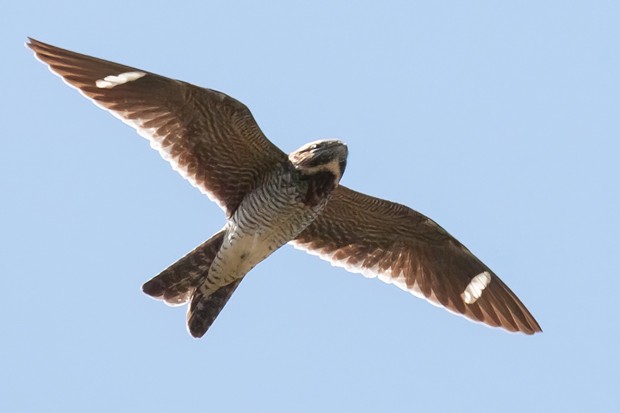 On warm, summer evenings, you'll see nighthawks catching their dinner—flying insects. Common nighthawks dine at dusk and dawn using their excellent night vision. If you want to see one, scan the air above a river or brightly lit areas (like streetlights or billboards) during these times. This is where the flying insects are, so this is where the nighthawks are. They are easy to spot with their looping, erratic flight, nearly constant flapping and sporadic gliding. Their long wingspan and white wing patches help make them even more recognizable.

Let's talk about their diving displays, because if you've ever heard it (yes, heard it), you aren't soon to forget it. Male nighthawks will dive while flexing their wings, producing a booming sound. If you haven't heard it before, an example is linked in the online version of this story. You can imagine my confusion/slight terror when I heard this booming sound for the first time while camping in a burn area off the Cascade Lakes Highway. I thought something was coming to get me for sure! The males use this diving display toward females or intruders of their territory, including people.

Beyond this booming sound while diving, males make a sharp "peent" noise, while females tend to remain mostly silent.

Another interesting thing about common nighthawks is that they nest on the open ground; there is no actual nest created. Females generally lay two eggs at a time. Both the males and females feed the chicks once they hatch.

Common nighthawks have one of the longest migration routes of any bird in North America. Prevalent through the U.S., they migrate down to southern South America. Not much is known about their overwintering grounds, however. Although nighthawks are usually solitary, during migration they will form loose groups.

Although it's difficult to get accurate counts of common nighthawks (due to their camouflaged coloring and affinity for dusk and dawn), there was a 61% decline of the species between 1966 and 2014. This is believed to have been caused by a decrease in flying insects due to pesticide, as well as habitat loss.

The next time you're out and about at dusk or dawn, make sure to scan the skies for the common nighthawk, an incredible creature of Central Oregon.

— Jana Hemphill is the Deschutes Land Trust's Outreach Manager. She collaborates on membership development, assists with communications and manages the Land Trust database. She lives and works in Bend. Prior to arriving at the Land Trust in 2016, Jana lived and worked in Japan and throughout the American West, including Colorado, New Mexico and Wyoming. She has a B.A. in journalism from the University of Iowa. Jana is on the Board of Directors of Bend Bikes and on the leadership team of Central Oregon Womxn in Conservation. She enjoys being outside as much as possible, including hiking, backpacking, bike commuting, cross-country skiing, and traveling the world with her husband. You can also find her cooking with veggies from her local CSA.