Get Up, Stand Up | Kids In Action | Bend | The Source Weekly - Bend, Oregon

Get Up, Stand Up 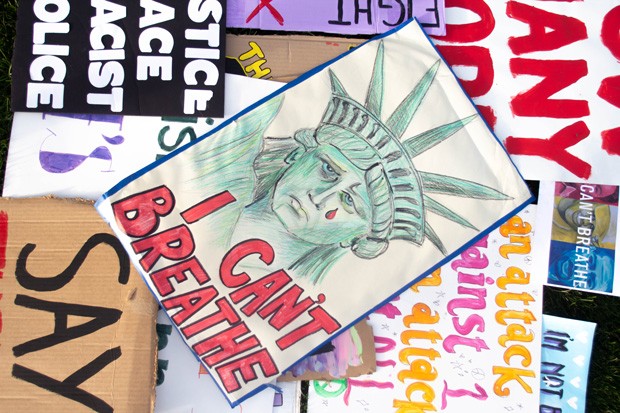 Bend Nest: What prompted you to organize a BLM protest?

Jade Jager: The first one I decided to organize was right after George Floyd's murder... I saw that video and I just got so upset, and I was crying about it and didn't know what to do. My mom walked in and said "Jade, why are you crying?" I said, "Because police brutality is horrible." And she said, "Well, do something about it!" And I said, "OK...Ok, I will!" From there it just exploded into everything else.

BN: Regarding Black Lives Matter, where do you see our youth standing?

JJ: I think our generation is being exposed to so much more than other generations...so many things, the way we were raised...we have so much compassion. We care more about each other, more about other peoples' lives than our own and we're willing to fight for that.

BN: Do you think that's connected to social media in any way?

JJ: Yes, with social media, we're able to connect so much more and see what's happening in all parts of the world. We see we're not alone in this, this is happening worldwide.

BN: We talked about your mom a little bit. She's the one who pushed you towards this. Has she been supportive throughout all this?

JJ: Yeah, I'm so lucky. My parents are pretty liberal for GenX. They've been super supportive with everything. They like to play devil's advocate to test me a lot, which annoys me, but..."

BN: Where are you going with this activism?

JJ: We're planning to keep doing protests every week throughout the summer. We're not going to stop fighting until there's equality. I know we're meeting with the Bend-La Pine school board and with one of the state reps. They passed a bill in 2019 that would require racial education within all Oregon schools...they saw all of our activism and want our input. So that's going to be really great.

BN: What do you see as the path for ending racism and police brutality?

JJ: Defunding the police, but not completely. Reform the way they are being trained. Police have so little training. You see the lawyers, and they have to go to school for at least six years to understand the depth of the law. It's insane that lawyers have to do that, but police officers don't.

BN: If you could give any advice to other young people in our community regarding racism or the BLM movement what would it be?

JJ: Don't be afraid to stand up to your peers and family about racism because there's no excuse for racism.

BN: Do you think the protests in Bend were a success?

JJ: I think they were more successful at first because more people were in shock about it, but people just become numb to things when they keep happening, so people have lost steam for it. At one of our last protests, only 30 people came as opposed to the first one I helped organize which was about 2,000 people. I think people think that because they went to one protest they're fine, they did their part. But it's not...you haven't done your part until there isn't racism, until there's change.

BN: What's next for you, regarding protests, college...where do you see yourself taking this ability to organize and to activate?

JJ: For a couple of years now I've wanted to go into law and this has just reinforced that idea and kind of pushed me into wanting to go into politics, to change things from the inside. So, I'm seeing myself going to college and getting a major in political science. And, I really want to go to New York and intern for Alexandria Ocasio-Cortez, because she is the best!