Getting Cozy at Spider City Brewing

Spider City Brewing is a new kid on the beer block, opening this past November. I had the opportunity to speak with one of the owners, Melanie Betti, who started the brewery with her twin sister Michele Betti and their college friend Tammy Treat.

Yes, this brewery is owned by women. Cool, right? 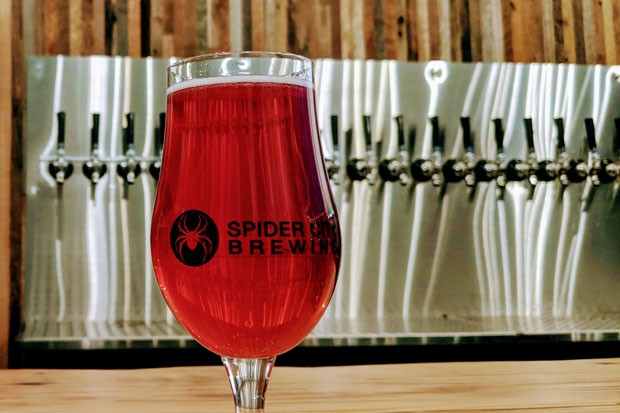 Melanie said the three of them always talked about opening a brewery while attending California State University in Chico. As of now, it's the only brewery in southeast Bend—but with Bevel Brewing in the works, I'm excited about the prospect of the expansion of breweries on this side of town.

I've been to Spider City several times. The taproom feels very comfortable, with a vibe that's modern industrial, but also cozy. You'll catch me there nearly every Wednesday. My favorite beer thus far is the Soleil Rubis, a mixed berry sour weighing in at 5.9 percent on the ABV scale. The brewer who created this beer is Michael Frith, who began brewing for Spider City shortly after it opened. Prior to Spider City, he worked at Our Mutual Friends in Denver, Colo.

Frith told me that he named this beer after the "vibrant, ruby-colored sunrise" that we see often here in Central Oregon. When I drink Soleil Rubis, it takes me back to my recent Colorado vacation. I went to many breweries (like, a whole lot) and the beers I had were very CLEAN. They were phenomenal. Soleil Rubis fits that bill for sure.

Soleil Rubis is a fruity kettle sour. Over a half-pound mix of raspberries, blackberries and blueberries go into this beer. With all those berries, you would think it to be very sweet, yet it's not. Instead, it's kissed with the sweetness of the berries. It's a kettle sour, so it must pucker you right up, right? Wrong again. It's so well balanced. You get the touch of sour, the touch of sweet and this beautiful, balanced finish of the simple malt profile that screams of Colorado's clean and balanced beers.

My mouth is watering just thinking about it. It starts tangy and bubbly, and then the sweetness of the berries comes out. The beer finishes bright and clean. Did I mention how clean this beer is? That's important! This beer is my current favorite. On the drinkability scale I give it a four out of five. Beer enthusiasts who don't loathe sours will be excited about this beer. For the beginning beer drinker, this would be a great intro into sours, but kettle sours aren't for everyone. Spider City's Soleil Rubis is expected to be the first of a series of kettle sour beers. I cannot wait to try the next beer of the series.