Getting Feet on the Street | Culture Features | Bend | The Source Weekly - Bend, Oregon

Getting Feet on the Street

Redmond's very own First Fridays are officially underway, with many shops in the heart of downtown extending their hours and offering up fun treats and discounts for locals and visitors alike on the first Friday of each month, from June through December. Although the event is still new (Redmond is currently gearing up for its 6th First Friday ever, the first having occurred in June), it seems to be catching on.

At the most recent First Friday, locals perused the streets, taking advantage of free wine, cocktails and a plethora of homemade goodies. Several local tap houses and breweries hosted live shows, and Kobold Brewing released a brand-new porter in honor of the occasion. As First Friday continues to progress and expand, local business owners plan to offer more local specials and new releases. 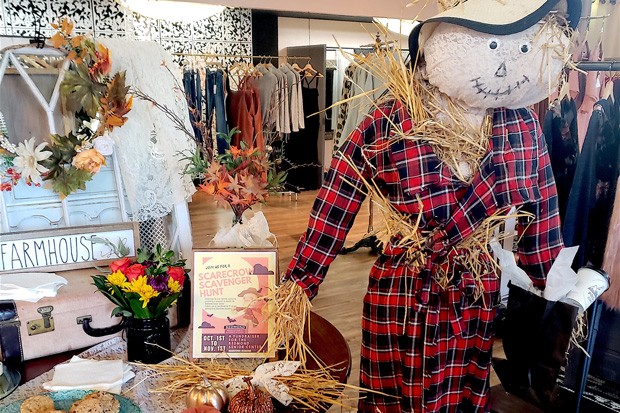 However, while Friday foot traffic had definitely increased, it was clear at the October First Friday that the fledgling event was not yet living up to its full potential.

Willow Wild was the busiest shop on the block, offering up samples of locally distilled gin, cupcakes and coupons. Nicole Meager, shop owner, enthusiastically praised the impact of the event on the local community. "The event has been awesome; it's really helped the local economy," she said. "During the last First Friday we served around 400 samples of hard cider." She did mention, however, that more shops would be inclined to stay open late once the event begins to see a greater influx of potential customers. Currently, everything shuts down at right around 7pm—aside from the (not yet booming) after party, held at Redmond's Initiative Brewing.

In addition to sales and samples, the streets of downtown Redmond were lined with fashion-forward scarecrows, decorated by shop owners in participation of a local fundraiser. The scarecrows are part of a community-wide scavenger hunt, during which local residents of all ages are encouraged to find and vote for their favorite. Each vote costs $1, and all proceeds go directly to The Redmond Senior Center—a locally funded center focused on enhancing the lives of older community members by offering a wide range of services and educational programs.

The city of Redmond is brimming with live music, great food and a host of other activities, ranging from trivia nights to art exhibits. First Friday highlights many features of the up-and-coming city, and will only continue to grow as the word continues to spread.