The Giving Plate is in the midst of a $3.5 million capital campaign to raise funds for its new space. Overall, it earned $259,708 in donations through Central Oregon Gives. 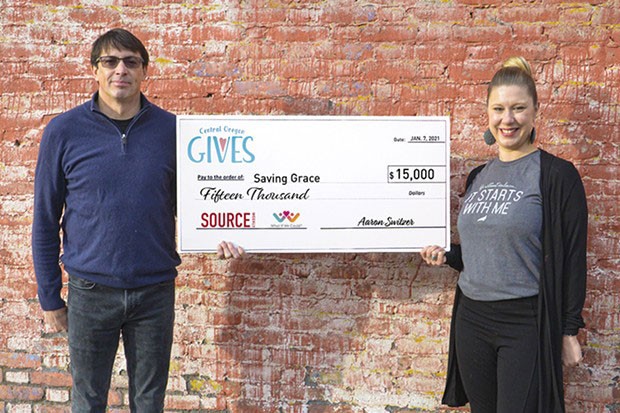 "We are focused on creating a space for our guests that creates community and dignity," said Renae Staley, executive director. "We are really on the brink of something special and this $15,000 and all the donations make a very significant difference." The Giving Plate provides meals to some 2,700 people each month.

The Central Oregon Gives campaign, an annual effort to consolidate resources and offer nonprofits an online vehicle for end-of-year donation campaigns—as well as giving donors great perks—helped local nonprofits raise more than $660,000 in total funds. Along with the top earner in the program, which wins that $15,000 prize, nonprofits also get to vie for other prizes, including a $2,000 prize for the nonprofit earning the most donations of $25 or less.

This year, that award went to Desert Sky Montessori, which plans to use the funds in support of its effort to move into the former REALMS school building on O.B. Riley Road.

"Central Oregon Gives completely changed the game for us," said Julia Sutter, executive director of Desert Sky Montessori. "It's not only the promotional pieces produced by the campaign, but it cuts out so much of the admin piece on our end, as well. I'm so thankful for it."

In total, 1,689 people donated to the Central Oregon Gives campaign, with a total of 2,075 donations. Of those, 718 were less than $25. Anyone who donated $25 or more was eligible for a weekly thank-you gift from local businesses that included Avid Cider, Backporch Coffee Roasters, Barre3, Boneyard Beer, Fjällräven, High Desert Museum, Humm Kombucha, Old Mill District, Roam, SCP Redmond Hotel and The Suttle Lodge.

Source Publisher Aaron Switzer, who also founded Central Oregon Gives as an extension of the Source's work in the community, is excited to see the program continue to see so much success—and more importantly, to see local nonprofits better able to carry out their missions thanks to community support.

"We put our energy behind this project every year because we've seen the tangible value of this digital link between open-hearted community members and nonprofits doing essential work for our communities," Switzer said. "We're already making plans for 2022."