Giving Thanks for What the Land Provides | The Source Weekly - Bend, Oregon

Giving Thanks for What the Land Provides

Local indigenous farmer is part of a growing nationwide movement to restore native foodways, and a connection to the land

This Thanksgiving, while many Americans are fussing over turkeys and emptying cans of cranberry "sauce" onto plates, Spring Olson will be cooking up a meal of pheasant stuffed with sweetgrass, topped with bison-cedar gravy and served with sides of green beans and wild rice. If that seems like a far cry from the traditional Thanksgiving dinners coming out of modern American kitchens, it's because it is. 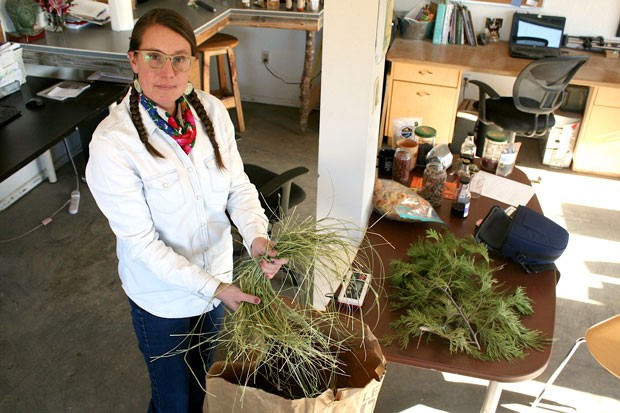 It also represents a movement to restore native foodways for indigenous people—a movement that's gotten some massive exposure by way of a breakthrough cookbook, published in 2017.

The winner of 2018's James Beard Award for Best Cookbook has become a rising star in a movement that goes beyond just knowing where one's food comes from.

In "The Sioux Chef's Indigenous Kitchen," Oglala Lakota chef Sean Sherman and co-author Beth Dooley build recipes filled with ingredients endemic to North America, as part of an effort to revitalize Native American cuisine and to reclaim "an important culinary culture long buried and often inaccessible." Things like smoked trout and white bean spread, served with wild rice cakes, are in the book. Things like fry bread—historically made by indigenous people forced to live on reservation rations of lard, flour and salt—are not.

“There’s a few token words that are going around the tribal community—you might have read about with Sean Sherman and the James Beard Award; it’s ‘decolonization’ of our food, and the ‘precolonial’ food movement.”—Spring Olson tweet this

Sherman, who was born on the Pine Ridge Reservation in South Dakota and spent years as a chef in Minneapolis, Minnesota, was on a rejuvenation trip in Mexico when a revelation hit: Around him were native Huichol people, cooking with native foods, as they had for centuries. That encouraged Sherman to re-introduce indigenous foods in his own life—and not only that—but to give them a 21st-century flair that eventually earned him recognition from the Beard Foundation as well as national magazines. 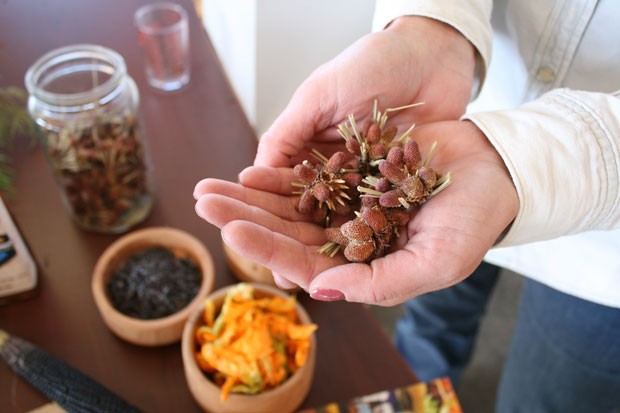 In Central Oregon, locals can also find an indigenous-food champion, working away at her 6-acre farm, Sakari Farms, in Tumalo. Olson is a passionate advocate for helping indigenous people re-connect to the bounty of the land around them.

Olson grew up in the coastal town of Valdez, Alaska, the daughter of a chief in the Kingikmuit tribe. There, she says, native people were reliant on foods from the sea, and on foraging and gathering. For Olson, the notion of reserving one day—Thanksgiving—to give thanks is odd. Native people, she said, gave thanks every day, for the bounty the land and waters provide.

Today, she combines her familial knowledge and her background in natural resource management with traditional farming techniques at her farm, where she grows veggies, flowers and herbs which help supply her business, Sakari Botanicals. Since buying the land in 2018, Olson secured a tribal loan to build a greenhouse on her property. She now grows around 130 varieties of plants—half of which are native foods. Olson grows and stores seed for the Central Oregon Seed Exchange, and keeps a special seed stash just for sharing with indigenous people. Both seed projects are aimed at providing people with more access to healthy, local foods. Last year, she won a national U.S. Department of Agriculture women's farming award—the first female tribal farm owner in Oregon to do so. For indigenous people, Olson's seed bank is part of her commitment—along with the chefs mentioned above—to bringing back native foodways.

"There's a few token words that are going around the tribal community—you might have read about with Sean Sherman and the James Beard Award; it's 'decolonization' of our food, and the 'precolonial' food movement," Olson said. "It's to get back the power that we used to have, of our traditional ways. So that's a cool thing to bring up about Thanksgiving is that, this menu (Olson's special Thanksgiving Day menu) is pretty sweet." 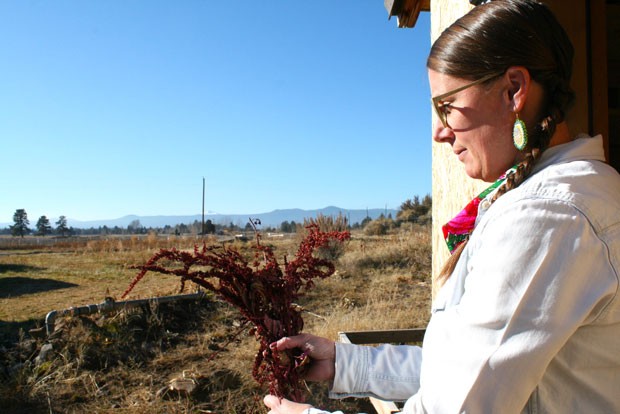 In addition to farming, Olson supplements her income with teaching at workshops and conferences, where other people passionate about the indigenous food movement also come to spread knowledge. This fall, Olson worked alongside Sherman and others in sharing skills and information with other indigenous people.

"It feels good to be on this place," Olson said. "It feels like we're doing really good work out here, and if it has to be at the national level before it trickles down and gets noticed here, that's OK, too."