After commemorating the loss of Clark Glacier, the Oregon Glaciers Institute looks ahead at what's to come

On Oct. 18, on South Sister, the Oregon Glaciers Institute held a funeral for Clark Glacier, pronouncing it "dead." Well, they almost held the funeral. Due to rain and wind conditions the team was unable to make it to the glacier itself, where they planned to livestream on Instagram while commemorating the life of the Clark Glacier. The team of hikers still held a moment of silence at the trailhead.

You might be asking, what does a "dead glacier" mean? To the recently formed Institute, it means this is it—Clark Glacier will never be what it used to be. A live glacier will be moving and shifting under all of that mass of white and blue—something Clark is no longer doing. 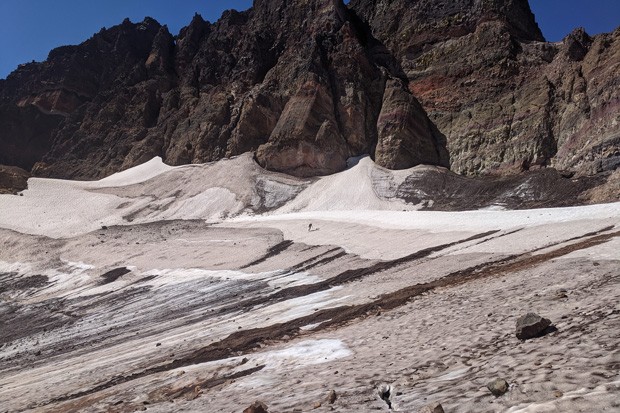 "Mostly it was the sentiment to help people realize that our environment is changing," says Head of Field Operations Aaron Hartz. "When that ice shrinks to a certain level, once you get much less than 100 feet thick of ice the glacier tends to stop moving. One way to think of it: a glacier can either completely disappear, or you can have remnants of ice, like a dead animal carcass."

The Oregon Glaciers Institute was founded in May this year by Hartz and President and Chief Scientist Anders Carlson. With no government agency tracking glaciers in Oregon, OGI is taking up the charge, recounting the number of glaciers left in the state. At the start of the 20th Century, it was more than 40. The group monitors each glacier's health by measuring its mass balance and gathering data to track future projections for Oregon's glaciers.

"The funerals a year ago for glaciers in Switzerland and Iceland were the initial spark. Like wait a minute, this is also happening here in the U.S., and no one seems to be paying attention. It turned out that we knew so little about the glaciers in Oregon, not even how many glaciers exist in the state," Carlson told the Source. "At some point, you have to put your money in or get out of the game, and in for a penny, in for a pound. And we did it as if not us, then who and when. There is only a decade left or so to effect change and after that, it'll be just sweeping up the pieces."

As OGI puts it, glaciers are more than just cool things to look at— they also serve entire ecosystems. When all the snowpack is gone, it's the glaciers that feed mountain streams and supply water sources to animals, Hartz said. Without glaciers, the entire environment will function differently and certain species may be forced to migrate.

"We do still have a lot of live ones. Some of them have quite a bit of ice. It's really hard to predict what they will look like in 10, 20 or 30 years," Hartz said. "Data from worldwide shows that glaciers are shrinking and our climate is becoming warmer with increased carbon-dioxide in the atmosphere. The trend is that they will shrink because they melt more in the summer than the snow they are getting in the winter."

To make a significant change we'd need to act fast, the group says.

"From a global perspective, we have about a decade left to make serious change. After that, it will be picking winners and losers as the world fundamentally changes. We are already in a bad state. Humans evolved in a world where carbon dioxide never exceeded 300 ppm. At the current carbon dioxide levels, the geologic record places the last equivalent climate to be more than 3 million years ago when Lucy roamed Africa," says Carlson. "We aren't built for the world we are creating through our use of carbon. We can't go backwards to pre-carbon times like pre-1850 and no one (myself included) wants to give up their laptop and electric lights, so we need a new fuel source. We have to change our way of thinking and give up our love affair with the internal combustion engine. It is 19th century technology and we do live in the 21st century! We can do better!"

To help people understand the issue, the Oregon Glaciers Institutes is holding a virtual presentation this week.