Glass Slipper: A Sea Change in Solving the Housing Crisis

A decade in the making, 2020 appears to be the year for real movement on the housing crisis

Central Oregonians have been painfully aware of the extent of the housing crisis for years.

As the community began to emerge from the Great Recession, locals began to understand that the flip side of "bust" is "boom"—and that "boom," for a lot of people, translated into a housing affordability problem and a growing population of people experiencing homelessness. This massive community problem has been brewing for a decade—and while our local governments have also been aware of the issue, the coverage we have afforded those governments has often erred on the critical side. 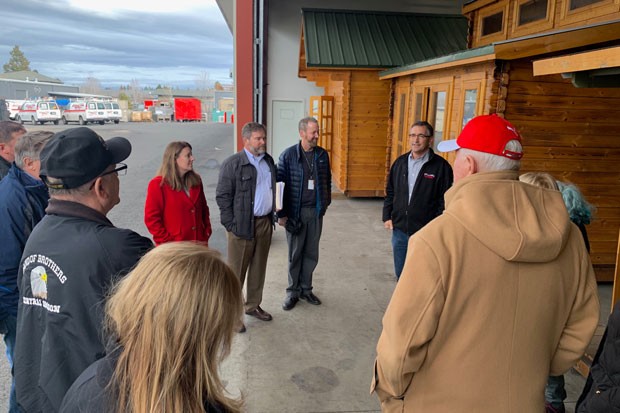 As we now bear witness to the cascade of programs aimed at solving the housing crisis coming out of the local area, we'd like to take a moment to give a thumbs up.

Our housing crisis may not be anything new—but at this point in time, it seems that local agencies, governments and individuals are finally taking an "all-hands-on-deck" approach to getting things done.

While this is far from a comprehensive list of the efforts happening in our community, it should stand to show just how much is afoot.

Read our news page this week for information on the transitional housing project, organized by the Bend Heroes Foundation and Central Oregon Veterans Outreach, and supported by local elected officials, that will provide 15 transitional-home-style tiny homes for veterans, located on a piece of land leased by Deschutes County. This has been a massive interagency effort, happening on a relatively rapid timeline. Deschutes County also stepped up in another way this fall, offering one of its empty buildings to house a temporary winter warming shelter for those experiencing homelessness.

In Sunriver, Sunriver Resort continues to press on in an effort to build employee housing for its workers (and those at other area resorts)—provided the Deschutes County Planning Commission approves its amended plan, after denying the first iteration. We maintain that adding this type of housing and slating it for traditionally lower-paid hospitality workers is progressive thinking on the part of a private business.

At the City of Bend, a few recent code changes, including one that now requires fewer road improvements on the part of developers, may result in building more housing units in Bend. The City also hired a full-time Community Outreach Officer last month, whose job it is to help locals connect with resources around homelessness and mental health. The City also hired an analyst last year, whose role is to address the City Council's goals around diversity, equity and homelessness.

City Councilor Bruce Abernethy—also part of the above-mentioned Central Oregon Veterans Village—is also taking part in the Homelessness Assessment and Solutions Project, a project that the City's website describes as "Private investment in a consultant to review and identify potential homelessness solutions." District Attorney John Hummel and Todd Taylor of Taylor NW are also involved in that project.

And with the Oregon legislative session now underway, state legislators are also aiming to tackle homelessness in a variety of ways. Rep. Cheri Helt is working to get more funding for unaccompanied homeless youth. Sen. Tim Knopp introduced a bill that would freeze property taxes for low-income seniors.

While we've mostly sunsetted the approach of giving locals a "boot" or "glass slipper" for their works in the community, we occasionally bring out the slipper to give kudos where it's due. This is one of those times. It's too soon to say that a resolution to the housing crisis is looming, but these are strong moves forward.