The adventures of a sagebrush lizard hunter 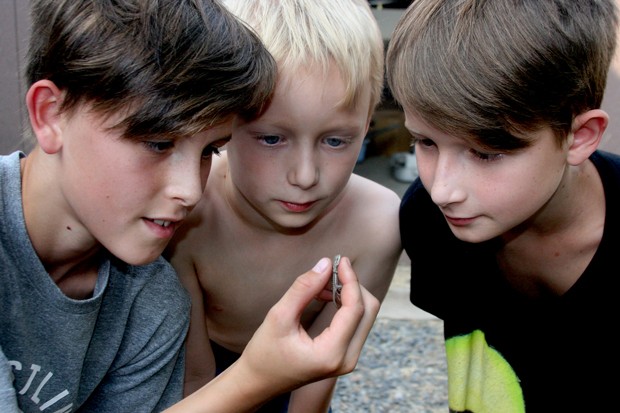 I've mentioned this (at least) once before, but I have to give credit where credit is due. My grandson, Daxon, is a piece of work. If he isn't building huge paper airplanes out of life-sized newspaper sheets, he's coming into the house shouting, "Hey, Grandpa Jim, look what I caught!" And the best part of that wonderful cry: after we've all 'oohed' and 'awed' over it, he puts it back exactly where he found it.

He and his family came over from Salem a week or so back and we got into a lizard discussion. Daxon asked if we had sagebrush lizards in our back two acres of sagebrush and juniper. I said I thought we did but had never seen one.

"Why don't you go out and find one," I suggested. And he did. Not 20 minutes later he came back with a beautiful teenage female sagebrush lizard carefully tucked between thumb and finger.

All the other kids jumped up and started shouting, "I wanna see, I wanna see!" Then they all wanted to go out back and catch one. But they sat quietly when I said one was enough, leave the others in peace, and they did. I put some sugar on it by asking them to take some time to "watch" them and keep track of what they eat by writing it up in their journals.

If you don't know our sagebrush lizards the way you'd like to, and you don't have a copy of Al St. John's field guide, "Reptiles of the Northwest," read on. In the event you can't get to the library or buy his book, what follows may be enough about sagebrush lizards to hold you till you have your own copy.

To begin with, sagebrush lizards closely resemble fence lizards, and a quick look may confuse you. Both are about the same size and have keeled scales on their back, but the sagebrush has smaller scales and is marked differently with lines, while the fence lizard has a line-and-blotched pattern.

Adult sagebrush lizards are grayish to light brown or yellowish in color. Their main (ground) color is broken by a lighter gray or tan stripe running down the center of the back and two lighter stripes, one on either side of the lizard (dorsolateral stripes). You may also see some that have orange markings on the sides.

Sagebrush lizards prefer open country where they skitter about beneath their namesake plant, while fence lizards prefer rocky habitat. Saying that, both overlap each other where habitats overlap. 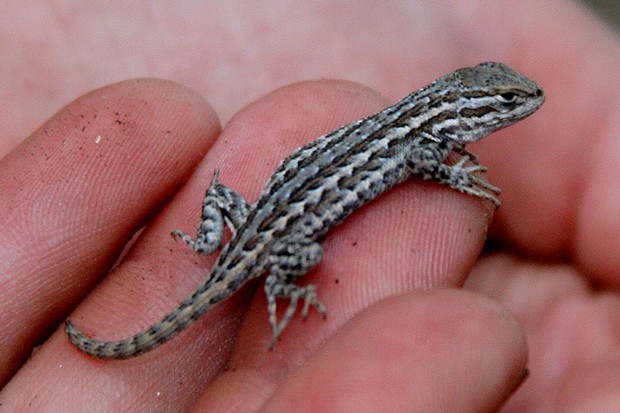 For example, at Peter Myers' place between Sisters and Bend, he has sagebrush lizards in his sagebrush and juniper habitat, and fence lizards running up and down the sides of his barn where they live in small piles of rock.

Myers also has an American kestrel nesting box on the side of a picturesque old juniper which housed a family of kestrels last year, causing his fence lizards to panic most of the daylight hours. When a kestrel is out to start a family, the male captures a lizard, stuffs it into his mouth and goes about the neighborhood, cacking, "Here I am ladies, and look what a handsome hunter I am!" Works every time. Then the lizards have a real problem; they're the main prey for kestrels.

True to its common name, the sagebrush lizard prefers to live in sagebrush, but is also found in pine and fir forests, redwood forests, brushlands and juniper woodlands. They're often found sunning on logs or rock outcroppings, and spend most of their time on the ground, although they can, and will, climb trees to escape predators.

One of the most interesting places you can find them in Central Oregon is within the Deschutes Land Trust's Metolius Preserve. There's an open meadow there surrounded by pine and juniper that was once a picnic area for the Sisters area residents of the Brooks-Scanlon Lumber Company of Bend. Not only is it a delightful habitat for sagebrush lizards, but a good-sized group of pygmy horned lizards thrive in the preserve as well.

The lizard's major problems for survival are loss of habitat due to recreation, agriculture, intensive grazing, aerial spraying of insecticide and increased residential development. That's what makes DLT the heroes of wildlife. Once they lay their hands on a piece of ground, it's saved for native wildlife habitat forever. If the lizards knew it, and could do it, they'd buy a box of candies for Amanda Egertson, DLT'S steward director, on her birthdays.